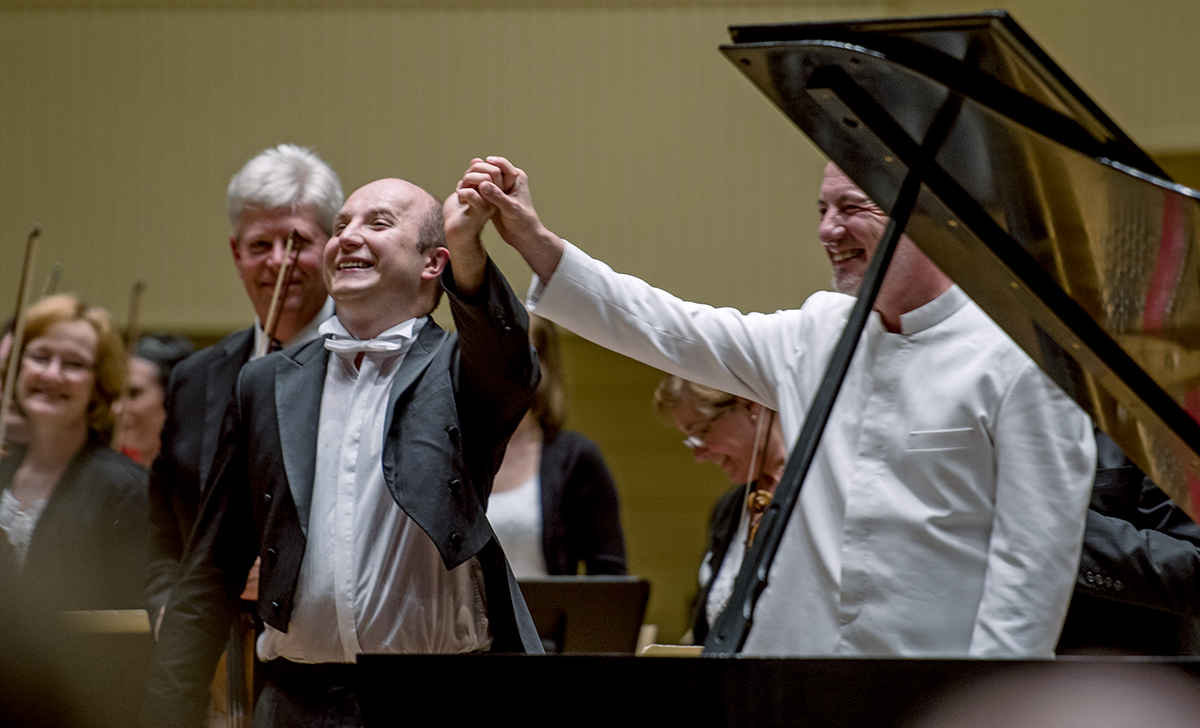 A new Amphitheater … and new hall.

The debate over the replacement of the old (so strange to write!) Amphitheater largely focused on its historic significance and beloved status versus a need for modernization. The plans made clear the new building would look similar. But many, including the admirably vocal supporters of the Chautauqua Symphony Orchestra, raised concerns about how it would sound. Not that it should replicate the resonance of the old Amp. However, the acoustics — not the electrical amplification system — of the new auditorium would be at least as good.

While the space impressed in Jared Jacobsen’s recital Wednesday on the Massey Memorial Organ, the range of timbre an orchestra provides made Thursday night’s first CSO concert, led by conductor Rossen Milanov and featuring pianist Alexander Gavrylyuk, the first true test. While it’s early days, and Milanov and the orchestra have adjustments to make, it’s fair to say the new Amp has more qualities of a concert hall than it did before: a warm, rounded resonance capable of expanded hues and dynamics. Mind you, no outdoor facility will be mistaken for Carnegie Hall or Vienna’s Musikverein. And no open-air auditorium can shut out passing noise. But that’s the joy of the Amp, past or present. The audience is connected to the environment — the ringing of the bell tower, the outbursts of passing children and the rush of the wind.

At first blush, the acoustics were crisp, particularly in the higher register, and the woodwinds’ tone bloomed, likely attributable to the steepened arch of the central ceiling. Jacobsen elicited a similar result on the Massey. The timbre is there for the taking. My only concern is that the winds overwhelmed the strings in tutti sections. While that’s often the case in performances anywhere, it was pronounced here, with the strings often drowned out. It’s nothing skilled musicians and conductors can’t handle. They will simply have to adjust the balance. It also might help to position the orchestra closer to the lip of the much bigger stage. When playing on their own, or in quieter passages, the strings certainly displayed plenty of tonal shade and color. Of course, I can’t speak to how the musicians hear each other on stage. There were a few moments when the ensemble suffered, but that will be an ongoing adjustment, as well.

All of this served to complicate the performance of two titanic works of the standard repertory: Tchaikovsky’s Piano Concerto No. 1 and Symphony No. 4. Gavrylyuk, Milanov and the orchestra members seemed continually to be probing the hall’s qualities. A repeated phrase would often be subtly altered not so much for expression but for experimentation. Gavrylyuk’s feel for Tchaikovsky was evident, but he often pressed the issue in the bracing phrases leading to roughness where polish is expected. My guess is that he felt the need for more heft in the new hall. He performed the hushed and sweet moments with aplomb. His virtuosity is apparent, yet lyricism is his best quality.

In the Fourth Symphony, Milanov displayed his penchant for the light touch, allowing the orchestra to breathe through nudges rather than pant under commands. This was particularly to the benefit of the woodwinds, whether in solos or together. Not that he curbed the drama of the work stemming from a troubled period in the Russian composer’s life. Whether in the punch of the so-called “fate theme” or the bombast of the finale, the conductor captured the spirit of the turbulent work.

Created in the image of God, we contain mystery and divinity