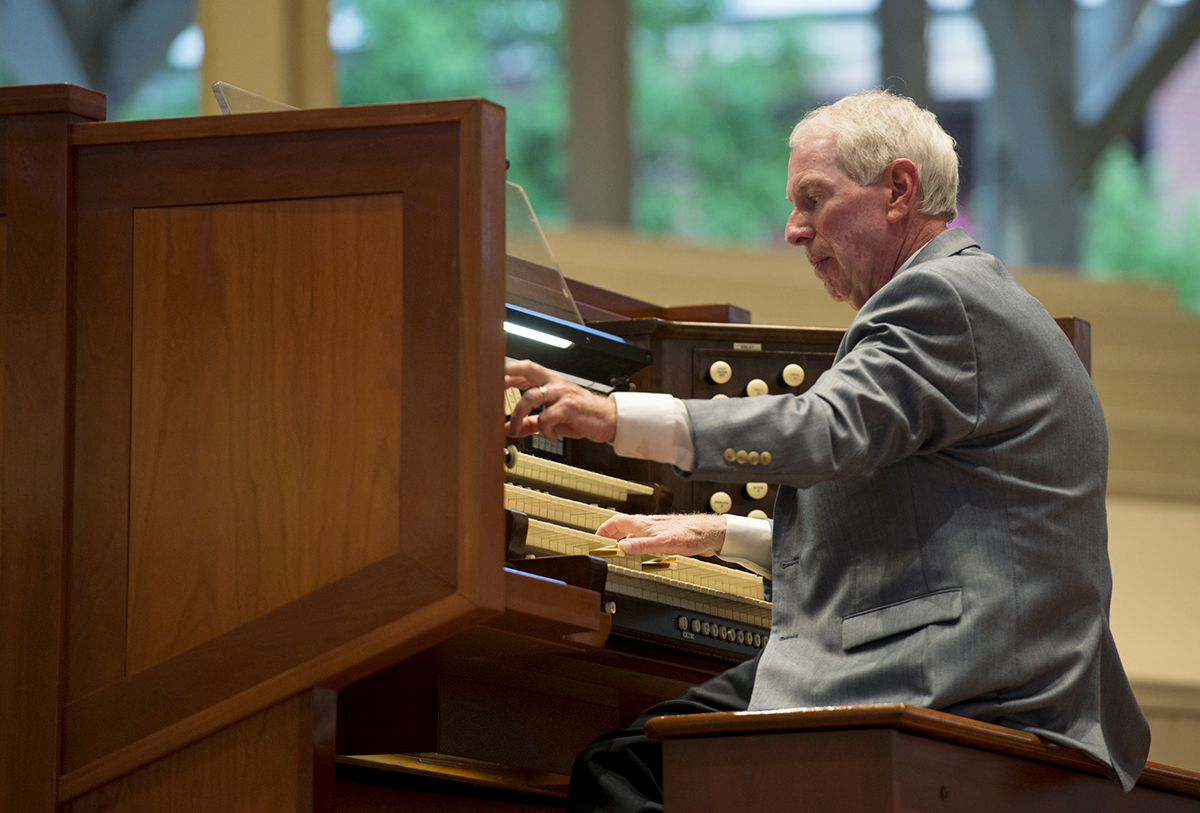 Jared Jacobsen plays the organ to accompany the Chautauqua Choir during a Sacred Song Service in the Amphitheater on Sunday, June 26, 2016. SARAH HOLM/STAFF FILE PHOTO

After 110 years, multiple restorations and the complete rebuild of its home around it, the Massey Memorial Organ remains standing in the new Amphitheater.

The first Massey Memorial Organ Mini-Concert of the season will honor that resilience at 12:15 p.m. Wednesday in the Amp. Jared Jacobsen, organist and coordinator of worship and sacred music, titled the program “Survivor!” and said it will showcase the continued strength of the instrument.

“It really is a survivor,” Jacobsen said.

In 1907, Eliza Massey donated the Massey Organ, which was built specifically for Chautauqua Institution, in memory of her husband. Jacobsen said it was the “dream instrument” in a “superb setting.”

However, it was not perfectly maintained over the years and underwent what Jacobsen described as a poorly done restoration in the 1970s. By 1992, it was in rough shape.

It was then that the Institution hired the Fischer Pipe Organ Company to undertake a complete restoration. They removed the organ from the Amp and returned it in time for the following season. Jacobsen said the Fischers’ work was superb and the instrument has only required minor repairs since, even though many experts did not think the overhaul would be possible.

In 2016, though, the organ faced another challenge. The Amp’s rehabilitation called for the entire structure — save for the organ chamber — to be taken down. When crews removed the final beam that connected the chamber to the larger facility, it became apparent that the organ chamber had been playing a structural role it was not meant to, helping hold up the entire building. Contractors decided to move up the timeline, completing a controlled collapse of the structure the same day.

“I think if I had known that three weeks before, I wouldn’t have played ‘Largo’ so loud,” Jacobsen said.

Another reason that Jacobsen titled the program for the first Massey Organ recital “Survivor!” was because the entire construction of the Amp was streamed live online, much like the reality television show “Survivor.”

At one point on the livestream, viewers could see the Massey Organ standing alone in a crater where the Amp once stood, Jacobsen said.

On Wednesday, however, the instrument will be surrounded by its supporters and fans. Jacobsen said he is going to focus on playing his favorite organ pieces, including Bach’s famous Toccata and Fugue in D minor.

Also on the program are Cyril Jenkins’ “Night” and “Dawn,” which Jacobsen said will show off the “wonderful soft colors” of the Massey Organ, and César Franck’s Chorale in A Minor.

“I just want to revel in the wonderful sound with the audience,” Jacobsen said.