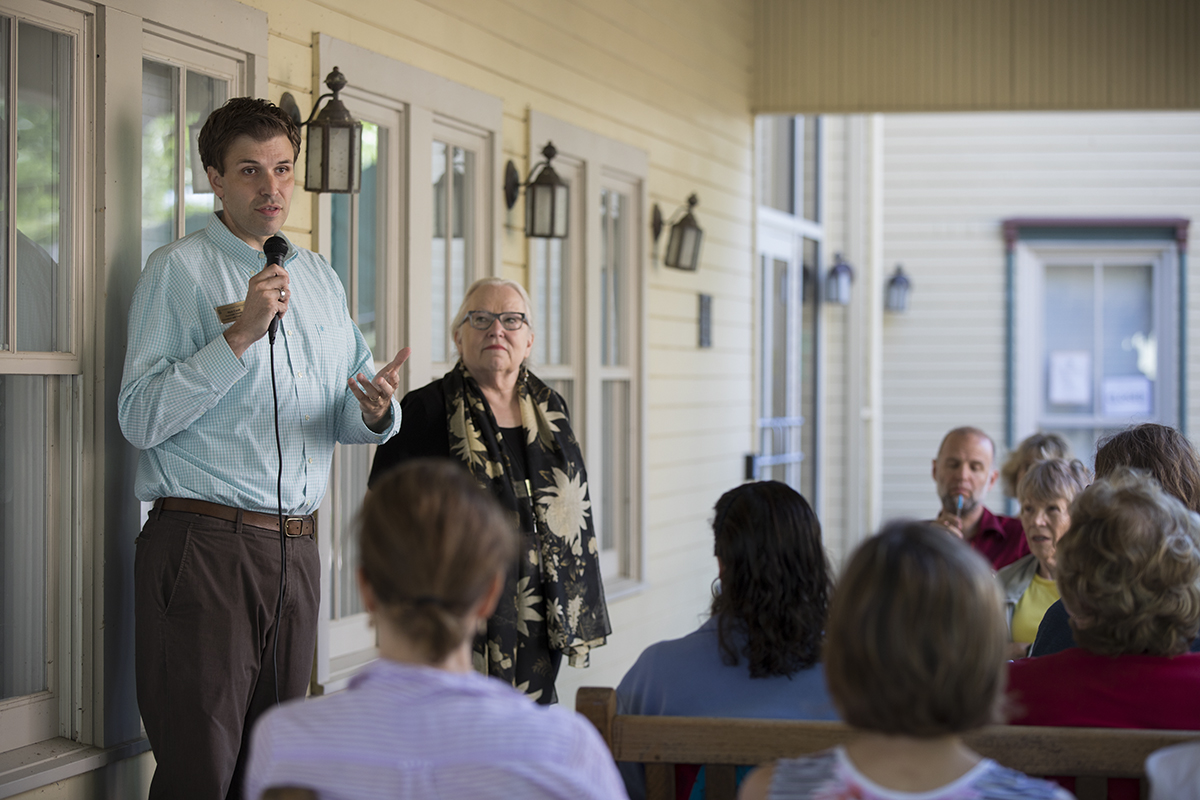 Vice President of Education, Sherra Babcock and Associate Director of Education and Youth Services Matt Ewalt host the porch chat on Wednesday, July 5, 2017 at the Hultquist Center. The chat was focused around youth and family and the obligation Chautauqua has to young people. PAULA OSPINA / STAFF PHOTOGRAPHER

Though Matt Ewalt and Sherra Babcock are moving on from their positions after this season, they took the time to share current and future goals for youth programming and education initiatives during Wednesday’s Porch Discussion.

In the fall, Ewalt, the current associate director of education and youth services, will move on to serve as Chautauqua Institution’s chief of staff and will spearhead the lecture platform planning and programming. Babcock, who serves as the vice president and Emily and Richard Smucker Chair for Education, will retire in October. Both have worked at the Institution since 2007.

At the top of their list is working to create a more comprehensive and inclusive environment for youth, both on and off the grounds, regardless of how long their experience at Chautauqua may be.

“If those young people are having a powerful experience, they’re going to be guiding the decision whether to come back,” Ewalt said. “Those are Chautauquans now and Chautauquans in the future.”

Lisa Northman voiced her disappointment regarding the lack of consistent and suitable programming for special-needs children. Northman said her 7-year-old daughter, who has general anxiety disorder and obsessive compulsive disorder, isn’t always able to get the attention she needs from counselors, or feel comfortable within the Boys’ and Girls’ Club and Children’s School environments.

“This is her summer, too,” said Northman, who’s been coming to the Institution for 39 years. She said she is faced with the decision of either keeping her daughter enrolled in the full-day program or scaling back to a half-day if her child’s needs continue to be underserved.

“As they create a vision for how to broaden youth services and the youth and families that they serve, they (need to) consider the needs of all children, including children with special needs,” Northman said.

“We have a lot of children with a lot of different special needs,” Babcock said. “What we try to do on that is to have conversation with parents in advance. When we are aware of special needs, … we try to educate the counselors and the (counselors in training) so that they can help the child unobtrusively.”

Multiple people expressed the desire for alternative youth activities and programming that aren’t entirely centered around the lake or swimming, and wanted to have more opportunities to give face-to-face feedback. Swimming is currently a strongly encouraged activity at Club.

“As my kids have grown older, there’s a little bit of a sense of an invisible wall between the programming for kids and adults, or Club and not,” Claudia Cummins said. “My kids would love to do Club and other things, as opposed to Club or other things.”

Other things, Cummins said, would include the flexibility for children to attend the morning lectures and engage with speakers.

Online surveys are routinely sent out to adults who register children for Special Studies classes and youth programming, but attendees suggested that the department should make more of an effort to hear from the children themselves.

That age demographic, according to Ewalt, doesn’t just include children but also high school students, college students and Chautauquans who haven’t started families of their own yet. New programming, like STE(A)M Truck, was received well by parents and children.

In September, David Griffith will start his role as the new vice president and Emily and Richard Smucker Chair for Education. Babcock said that Griffith will shadow her and Ewalt during Weeks Seven and Eight. Griffith is currently the director of creative writing at Interlochen Center for the Arts in Interlochen, Michigan.

Column: ‘A Crisis of Faith?’ encourages dialogue among Chautauquans