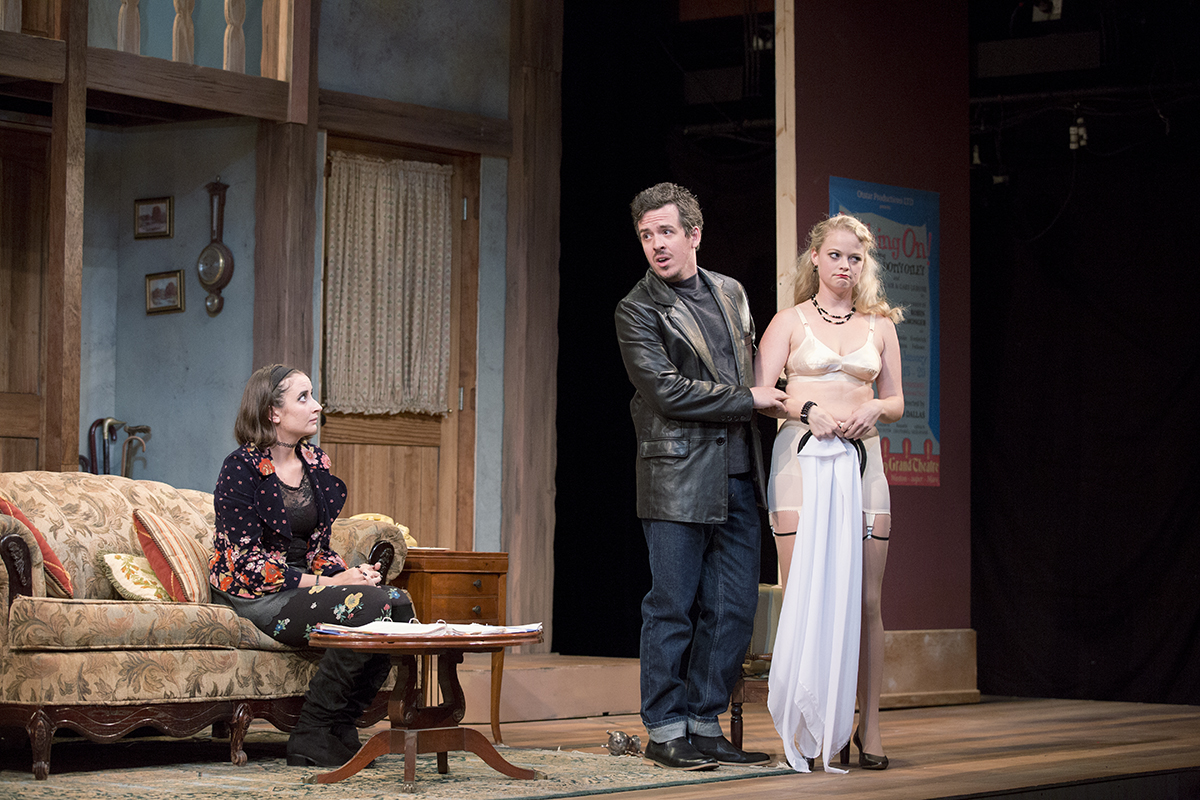 From left; Emily Daly, Craig Wesley Divino and Kelsey Jenison perform a scene during a dress rehearsal for Chautauqua Theater Company's production of "Noises Off" in Bratton Theater on June 29, 2017. "Noises Off" is a play within a play, and it kicks off the 2017 CTC season at 8 p.m. on June 30, 2017. CAM BUKER/STAFF PHOTOGRAPHER

There are no corsets this season at Chautauqua Theater Company, but there are girdles.

Noises Off follows the cast of the fictional play Nothing On, itself set in the 1950s. Helping establish that time period is the outfit on CTC conservatory actor Kelsey Jenison. She steps onstage to play bombshell actress Brooke (herself playing bombshell Vicki) in a pink polka-dotted dress with a full skirt.

It isn’t long before she’s out of that costume, though, and onstage in her girdle and bullet bra.

“I’m the gal that runs around in her underwear the whole show,” Jenison said. (Meanwhile, Jenison’s pink dress is hanging backstage waiting for her next performance and a duplicate is floating around onstage as a prop.)

Since Jenison’s character is meant to comically stomp about the set with, well, nothing on, the costume shop had to find the right undergarments. A vintage girdle proved to be too restrictive, but U.K. company What Katie Did, which sells vintage-style lingerie, solved that problem.

To put her own mark on Noises Off while staying true to the script, Calin looked to the color palette. Bright pinks, vibrant blues and an electric green decorate the characters onstage. Calin said she learned from designing costumes for a production several years ago at South Coast Repertory in Costa Mesa, California, that costumes serve as a visual cue for audiences.

“The only way it works is if the audience is able to easily recognize and follow the actors onstage,” Calin said.

Calin made her costuming debut with CTC during 2013’s Comedy of Errors, which, like Noises Off, was directed by CTC Artistic Director Andrew Borba and featured scenic design from Tom Buderwitz. Beyond CTC, Calin has worked on more than 100 regional productions and costumed 16 films in the United States and Romania. She has won several Los Angeles Drama Critics Circle Awards and Drama-Logue Awards.

A play-within-a-play, Noises Off shows actors performing the same act of the fictional Nothing On during three stages of its run. This means most characters appear in the same costume throughout the performance, which runs 2 hours and 20 minutes.

“They’re essentially just in one costume for the whole show,” O’Neil said. “The irony of it all is because the costumes go through so much physical abuse, we had to buy doubles of everything.”

Costume shop employees had their first day of work on June 2 and started on Noises Off on June 6. After learning Calin’s vision for the show, the shop got to work on creating the costumes, as well as rigging them for comedic moments. Two male characters wear pants that fall down, and a third male character needs padding in his suit to protect him during a physical fall down the stairs.

Multiple versions also come in handy when the actors perform two shows in one day and only have about two hours to reset. The costume shop is charged with cleaning the costumes, often handwashing items, between shows. Given the physicality of the show, in which actors routinely run up and down a flight of stairs onstage and backstage, costumes are often drenched in sweat after curtain call.

When building the costumes, the costume shop had to ensure the costumes could withstand wear and tear, as well as make it through a wash. Seams are reinforced and heavy fabrics were chosen over light cottons. Flat weights are hidden inside the waistbands of the pants that fall down, and the pants are also lined with satin to make them slippery.

None of these alterations should be noticeable from the audience, Calin said. Her work should “blend into the bigger picture.”

“It’s an extremely creative and collaborative work,” Calin said. “It’s a very exciting process of getting to the point where the show is open, and you have to constantly be flexible and be creative and intuitive.”