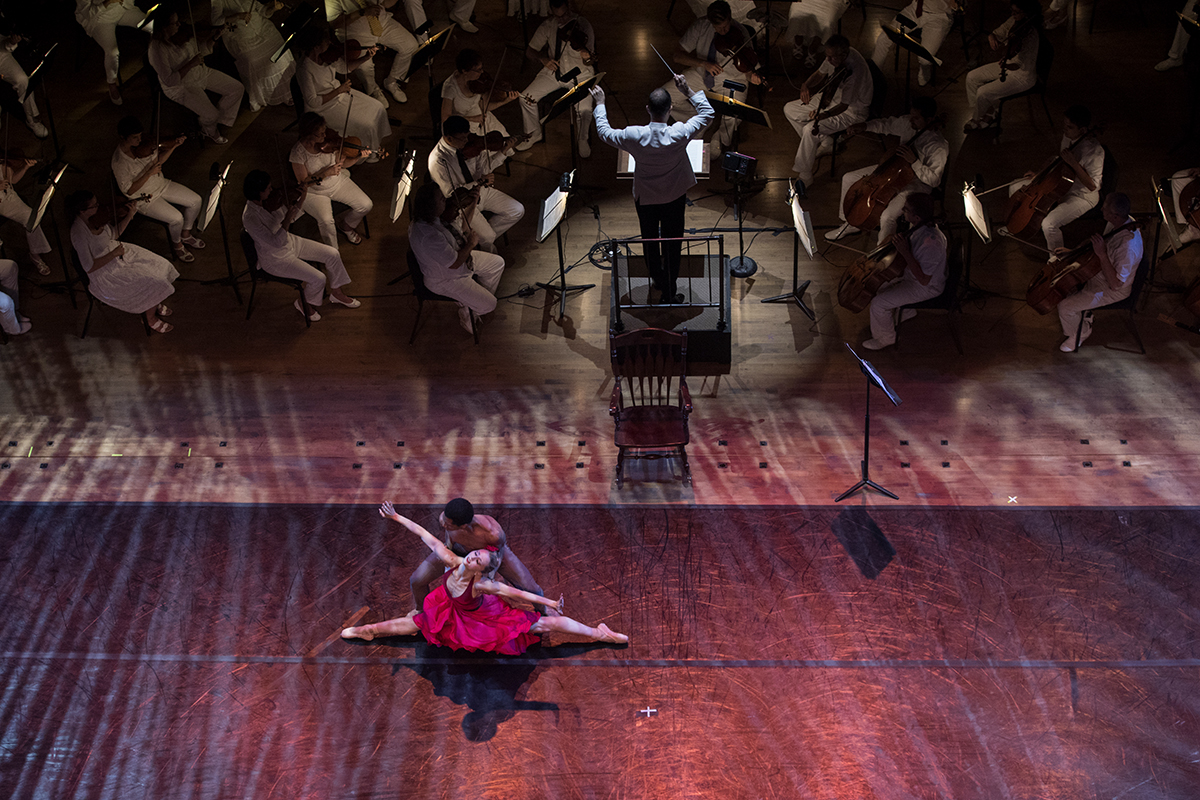 Collaboration always brings out the best of Chautauqua Institution’s diverse performing entities, and Saturday’s performance of “Mango Suite” demonstrated a resounding formula for the future.

Based on Sandra Cisneros’ 1984 best-seller The House On Mango Street, it wasn’t chosen immediately by composer Derek Bermel. But the book’s passion and spirit of hope, combined with the intention of producing a spiritually uplifting work, won out, leading to a two-year journey toward the extended Amphitheater stage. Both creators, who had worked closely on the adaptation, were in attendance.

The book’s main character Esperanza was expressed through several disciplines: a highly expressive, moving spoken role by Isabel Pask (whose entrance caused a roar from the claque of her theater colleagues), the lithe dancing of Chelsea Dumas and the singing of both Tiffany Townsend and Lindsey Reynolds. (Fortunately there were subtitles, since sung English is usually unintelligible.)

Musically, much of the scoring was necessarily supportive, since the action had to follow the score; there were many moments of subtly seething undercurrents, some sections with Latin beats and occasional tender, lovely moments. The writing for the singers was very skillful without standout arias, as both women expressed the stresses of Esperanza’s coming of age — gaining and losing friends, belonging, sprouting hips and discovering boys.

Sasha Janes’ choreography gave the dancers some acrobatic challenges, as well as some elegant moves as the story progressed; a central section even involved double dutch to emphasize youthful pastimes.

Choosing sections of the book to utilize all these disciplines must have been challenging, since it’s made up of many fragments, some only a few paragraphs long, with people and places popping in and out. Some of Esperanza’s experiences, especially the unwanted sexual ones (only slightly touched on in this show), are painful. Yet the book has been successful over 33 years because it speaks not only to young schoolgirls, who feel themselves in Esperanza’s combination of fragility and hope, but to adults who feel the power of Cisneros’ constant determination for a better life. The point came across through the chosen excerpts in this production: Esperanza is growing into a woman, dreaming of becoming her own person, with her own chosen existence and her own house someday … though knowing her roots will always be in that ramshackle house in Chicago’s Latino neighborhood.

At intermission, Cisneros was asked how thrilled she was to see her creations come to life.

“I’ve always wanted to be an actor, a dancer, a singer, a comedian … and tonight I’m all of them!” she admitted exuberantly.

Later, after the performance, the audience related wildly when Milanov brought her to center stage.

She also offered a whispered mantra relevant for many successful writers: “Divine Providence is a better novelist than I am.”

Milanov, always providing savvy programming, began the show with Leonard Bernstein’s 1944 ballet “Fancy Free.” Conceived by choreographer Jerome Robbins, it tells the familiar story of three sailors on a one-day liberty in New York, with each eventually showing off dancing chops to girls in a bar.

With its buoyant, confident style, insistent piano riffs by Claudia Hoca and accurate brass outbursts, it was the perfect opener. If it had also been danced by the Charlotte Ballet, my guess is that Milanov would have needed to give it stricter rhythm. But, played in concert, it’s one work that can take wide interpretive freedom, rhythmic juice and exuberance with which the orchestra played, complete with outstanding trumpet solos by Charles Berginc. In the three solos — galop, waltz, danzón — it was possible to picture the sailors’ showoff prowess. Just imagine the 26-year-old Bernstein, months after making his debut as a substitute with the New York Philharmonic on a radio broadcast, getting 24 curtain calls for his American Ballet Theatre score and racking up 160 performances at the Old Met. “Fancy Free” (soon transformed into the hit show On The Town), was a confident romp by a budding master and, under Milanov’s baton, the orchestra played as though they were having fun.

Regular Chautauquans will surely remember the huge productions of The Romeo and Juliet Project (2013), Go West! (2014) and Carmina Burana (two shows in 2015). The theatrical complexities of those shows meant weeks of rehearsal, without any possibility of their traveling as a Chautauqua-originated road show. But if theatrical or dance talent isn’t available in Milanov’s other posts at Princeton and in Columbus, for instance, the music could be performed separately, or it could be done either with singers alone and an Esperanza, and still be effective.

Though “Mango Suite” took plenty of intense coordination with planning over a much shorter period, the drain on the artistic departments involved was much less while achieving a similarly powerful, lasting impression. The work was funded by local philanthropists Francis and Cindy Letro, in honor of dedicated arts supporters Tom and Jane Becker, and commissioned by Chautauqua Institution and Milanov’s two other American orchestras.

You can bet plans are already spinning for future seasons, and one can only envision the infinite inter-arts possibilities involving the CSO, Chautauqua Theater Company, Chautauqua Voice Program and the Charlotte Ballet. We’ll just have to come next year and find out.