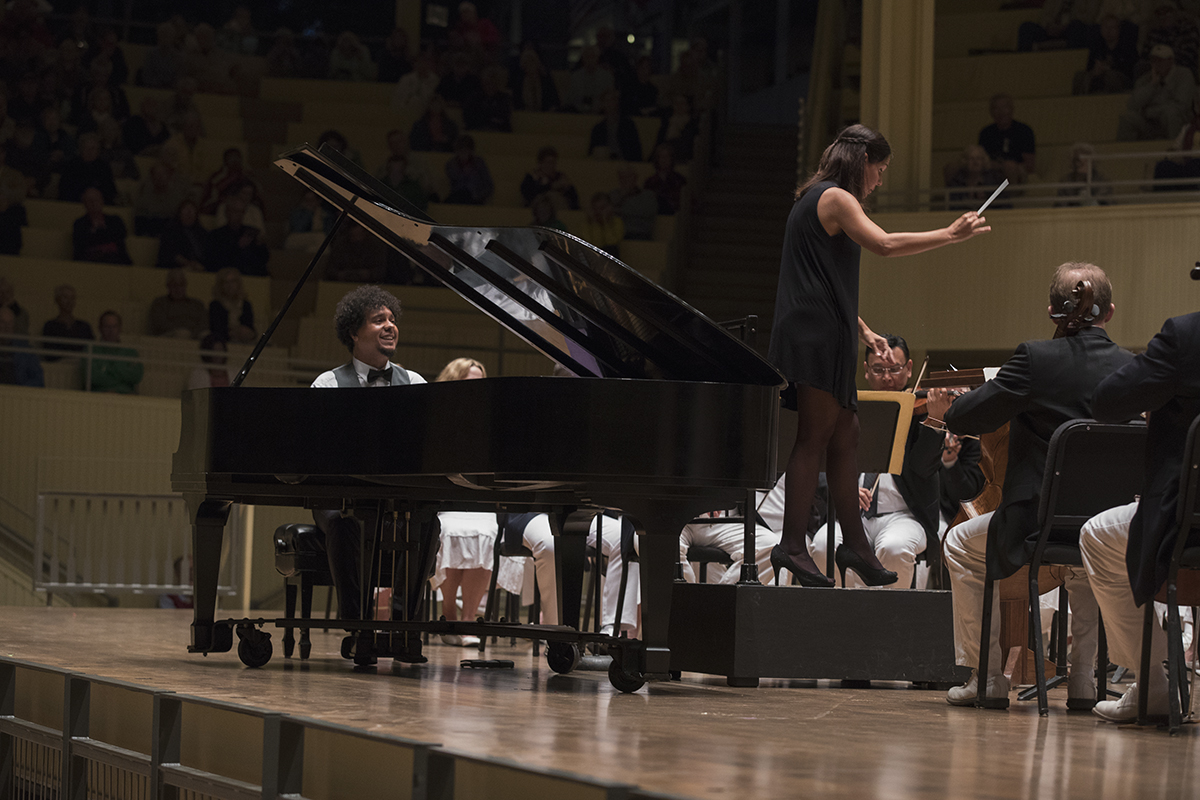 Daiana García conducts the Chautauqua Symphony Orchestra during "Viernes de Ciudad" composed by pianist Aldo Lpez-Gaviln on Tuesday, July 25, 2017 in the Amphitheater. Lpez-Gaviln was trying to describe each part of the day from morning to night throughout the piece. PAULA OSPINA / STAFF PHOTOGRAPHER

Tuesday’s “Cuban Night” at the Amphitheater offered an explosion of rhythm, astounding pianism and an evening of rollicking enjoyment. The second in the season’s “Into The Music” series, it reminded us of the rich traditions of music outside our borders.

It was also a family affair: Pianist/composer Aldo López-Gavilán, who appeared here briefly last year with his violinist brother, Ilmar, returned with his gifted wife, Daiana García, who led the Chautauqua Symphony Orchestra in her first U.S. appearance as conductor. They had both studied with his composer/conductor father and Havana legend Guido López-Gavilán, whose late wife, Teresita Junco, was an esteemed concert pianist as well.

López-Gavilán, in white shirt and gray vest, performed four of his compositions for piano and orchestra, all beginning with his solo piano’s rhythmic riff picked up mostly by the strings, followed by urgent and colorful meandering.

López-Gavilán began with his “Variaciones con Tema” (“Variations on a Theme”), written originally as a soundtrack for a film about Che Guevara — not his politics, but his photography — and later fully orchestrated. He explained that “the theme doesn’t exist, it’s always improvised,” and sang that evening’s unique motif to give us a head start.

The first variation was in perpetual motion, with woodwind snarls and flurrying pianism which, as happened often, wasn’t clearly heard over the orchestra. A descending scale figure made up the second, heard mostly in the strings. Variation three began and ended in duets, with piano high up in its range and Beth Robinson’s harp, featuring lurky bassoons in the center. The fourth, with sizzling violins and a big brass entrance, combined López-Gavilán’s jazz chops with a classical feel, with a finale dramatic in its simplicity. Nothing stuck in the memory, but it was a high-wire ride.

Throughout, García gave the orchestra very clear, specific beats, with sweeping gestures above her head and intimate knowledge of every cue; performances involving these two collaborators would have to be considered definitive.

“Luciernagas” (“Fireflies”) is dedicated to their three daughters, with his keyboard demonstrations of the family’s question-and-answer sessions, as the girls busily chatter while Papa and Mama give slower and more declarative retorts. Their story wasn’t that recognizable, but came replete with lots of repetitive piano ruminations, almost minimalist but played maximally.

López-Gavilán offered an unscheduled solo, based on a chant he heard associated with one of the many Cuban religions, with the intention of mixing it with a more modern Cuban style. He sang the theme, then launched into an amazing technical display, parts of which could have been by Liszt, rampaging all over the keyboard miles away from the original chant. I hope he asked to be paid by the note.

“Viernes de Ciudad” (“Friday in the City”) was written at age 16, in hopes of writing an optimistic piece about uniting cultures, represented by a day in Havana — or any city. After his opening declamation, a bassoon entered high in its register, perhaps symbolizing morning, followed by clarinet, flute and oboe entrances. It ended with winds and lower strings acting as echoes to the piano writing.

Before his last piece, López-Gavilán congratulated the orchestra, which responded ebulliently to the Cuban’s buoyant writing, and those who made his appearance at Chautauqua Institution possible. He also mentioned his DVDs and CDs brought specially from Havana, available afterward at the Athenaeum Hotel, which had offered a Cuban buffet feast, plus late-night tapas.

Demonstrating a few dance moves, López-Gavilán explained the last piece “Pan con Timba” (bread or toast with melted guava paste and cream cheese, sold at every street corner in Havana). He mentioned using the classic rhythm son, from which he said salsa is derived, as well as danzón, the 2/4 official dance form of Cuba, though their use wasn’t clearly apparent. He also asked orchestra percussionists to demonstrate the beat with timbales, conga and claves. After his intro came orchestral outbursts, encapsulating the evening’s most effective intersection of jazz and classical writing, and a final lovely sensual theme for strings and timbales. After his final rambunctious pounce at the keyboard, with full battery in support and brass entrances, the piece suddenly ended.

He received a well-deserved standing ovation, and a joyful smooch from his wife. When previously mentioning his daughters, he said he’d like to bring them if there’s another Chautauqua appearance, which there surely will be.

López-Gavilán is overflowing with talent, apparent in YouTube videos of his Prokofiev First Piano Concerto with the late master conductor Claudio Abbado, and the mighty Rachmaninoff Third Concerto led by his father, Guido. At the keyboard, there isn’t anything he can’t do, at a level somewhat above his still-evolving compositional imagination, and well above creating lasting melody from a culture where rhythm dominates.

My favorite work of his is the lovely “Epilogo,” which seems most focused and developed (check it out on YouTube); consider it a suggestion for his next visit.

The evening began on a festive note, as Chautauqua’s Vice President and Director of Programming Deborah Sunya Moore’s introduction was interrupted by a surprise “Happy Birthday” tribute from the orchestra. 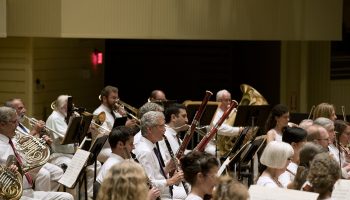