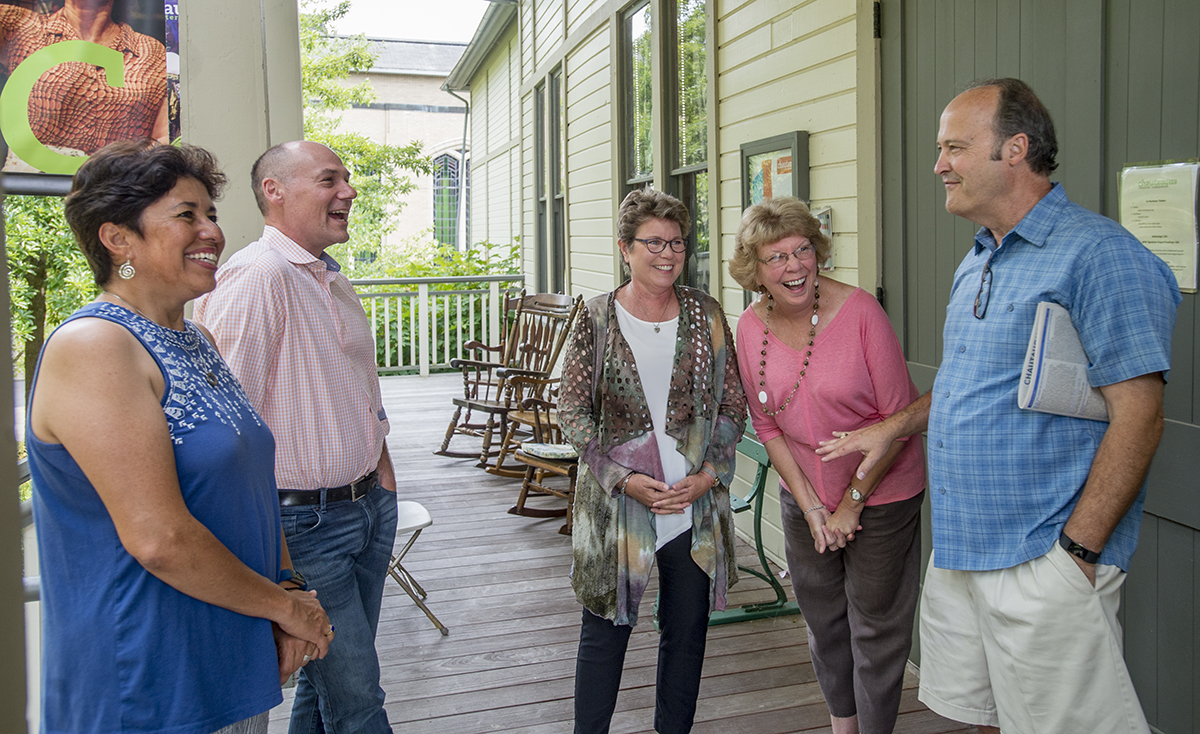 Chautauqua Theater Company Artistic Director Andrew Borba, second left, meets with the family of the late Hal and Aggie Fausnaugh, from left, Connie Villa, sisters Nan Johnson and Janine Obee, and Bob Obee last Sunday on the porch of Bratton Theater. Johnson and Obee distributed a gift from the Fausnaughs to CTC that doubled the company’s endowment.

Chautauqua Theater Company’s endowment allows it to produce high quality work at a high-quantity year after year. Now, thanks to a generous gift from the late Hal and Aggie Fausnaugh — distributed through their daughters Nan Johnson and Janine Obee — CTC’s current endowment support will be nearly doubled.

“(This gift) allows us to continue to produce, and produce at the level we’re producing at in perpetuity because it goes into the endowment — we’ll be able to draw off of that every year,” said CTC Artistic Director Andrew Borba. “It’s a real gift for the future.”

Everything CTC does is in some way supported through the endowment — from the three full main-stage plays they produced this year to the three New Play Workshops they have put on, among other special programs. Next year, CTC leadership plans to put on a Shakespeare play that will travel to surrounding communities such as Jamestown, Mayville and Bemus Point.

“There are so many aspects of what we do that require this kind of funding,” Borba said. “In the best way, (this gift is) a way to support the entirety of the theater.”

Among other things, CTC’s endowment supports the yearly costs of the paint and lumber, as well as other physical production costs required to build sets. It also provides the funds necessary to support the various artists that come to Chautauqua.

The Fausnaugh family has been coming to Chautauqua since 1977; although Hal and Aggie sold their house in 2007 and last visited in 2009, Johnson believes that their hearts were always here.

“This became their home away from home,” Johnson said. “When they started coming here, they just dove into everything. They loved it all: the programs, the lectures, the religious programs and all the arts.”

Hal and Aggie both passed away in 2016; however, their memory will live on, not just through their endowment to CTC, but in their hydrangea garden on Bestor Plaza, through their daughters and grandchildren who have grown up visiting Chautauqua, and on a plaque in Bratton Theater.

This plaque recognizes the Fausnaughs’ instrumental efforts in establishing — along with three other couples — the Friends of the Theater group that was integral in raising the money that funded the renovation of Normal Hall into Bratton Theater.

“They would host parties and fundraisers; they just felt passionate about supporting that art here,” Johnson said. “I don’t think in their wildest dreams they ever thought they could raise that much money, and see that happen, and have been such an integral part of it.”

Obee described her father, Hal, as a jack of all trades who never met a stranger.

“He loved that whole sense of community here at Chautauqua,” she said.

Obee described her mother, Aggie, as “more of a joiner” who was heavily involved with the Chautauqua Literary and Scientific Circle and the Chautauqua Women’s Club alongside the work she did for CTC.

For Johnson, one of her favorite memories of her parents was seeing them riding their bikes around the grounds.

“Especially my dad,” Johnson said. “My mom would say, ‘Don’t go fast, don’t go down the hills.’ One time he wiped out on his bike … and so my sister happened to be walking back. My dad’s like, ‘Could you go ahead and distract Mom because that would really help me out, so she doesn’t know I wiped out.’ They loved to ride their bikes here.”

Obee said her parents would be delighted at the impact their gift will have for CTC.

“They had no idea of the kind of difference that was going to make,” Obee said. “That would make them very happy.”

Obee, whose two children have grown up going to Children’s School and went through Boys’ and Girls’ Club, said Chautauqua has been a place of consistency for their family over the years. She and her husband are in the process of purchasing a condo on the grounds so the family will stay connected to Chautauqua for years to come.

“This gift … it can’t be separated from the passion and the love that that family has for each other, but also for the things that matter to them,” Borba said. “It just was so exciting to feel that support from them and from the Fausnaugh family as both a vote of confidence and a connection of passions — because we have a passion for the theater, as do they and this enables all of us to keep doing it.”

For more information about establishing an endowment at Chautauqua, contact Dusty Nelson, director of gift planning, at 716-357-6409 or foundation@chq.org.