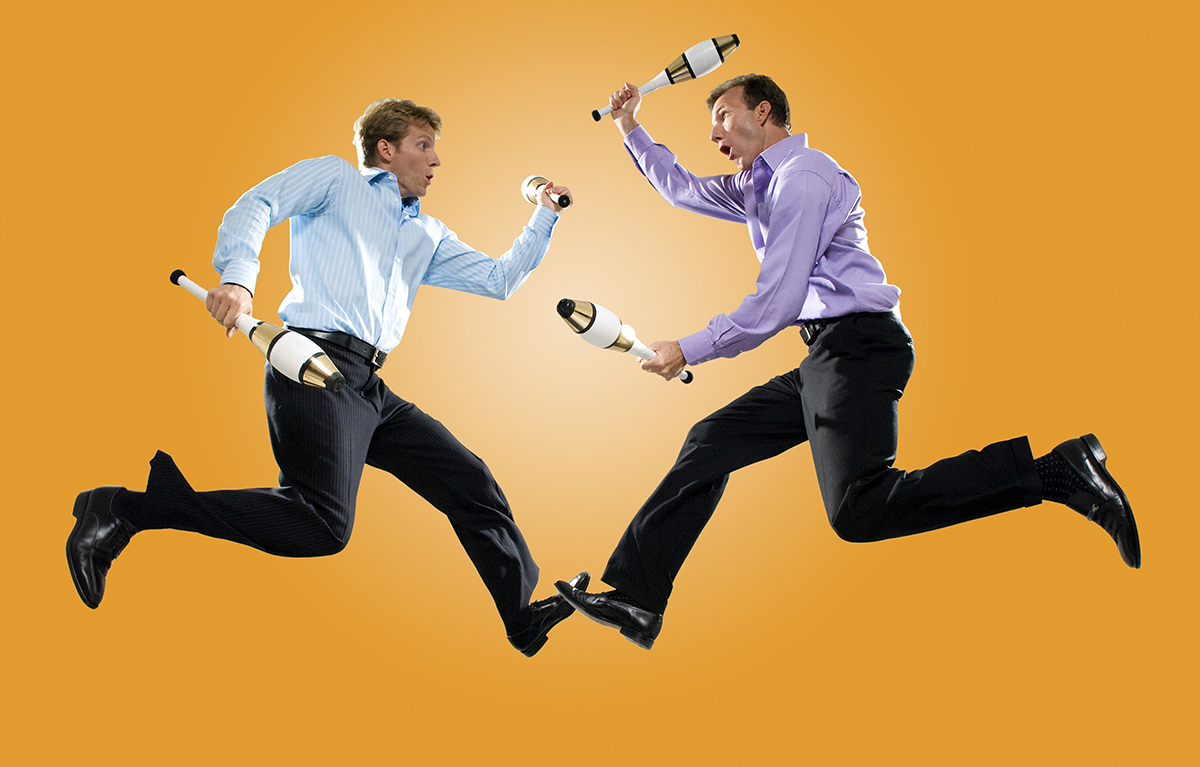 Not too many acts can do what The Passing Zone promises to do: save the world in 90 minutes.

Owen Morse and Jon Wee, the duo behind the comedy and juggling act, said they are up to the task. Having put on their show “Gravity Attacks” at Chautauqua Institution in 2014, Wee and Morse will return to present “The Passing Zone Saves the World!” at 7:30 p.m. Wednesday in the Amphitheater.

“We discover at the beginning of the show that there’s a serious situation in which the earth is in danger,” Wee said. “And some people with superhuman powers are going to be needed to save the world, and we start to wonder if maybe that could be us. And then the plot unfolds from there — and I use the word ‘plot’ very loosely.”

There will be stun guns, chainsaws, superhero capes and pingpong balls, but, most importantly, Morse and Wee said, there would be humor for all ages.

Audience members often tell the duo they were expecting a straight juggling show, like something out of a children’s birthday party, and instead got a comedy show with juggling stunts. It’s part of their schtick to try to change what people think of when they think of “the ‘J’ word,” Wee said, referring to juggling.

“The main point of the whole show is to entertain everybody and get everybody laughing,” Wee said, with Morse adding their act is similar to Penn & Teller or the Smothers Brothers.

The two learned juggling separately as children, and then met in 1986 at a juggling convention. After graduating college, they pursued a career in entertainment together, making their first television appearance on “The Tonight Show Starring Johnny Carson” in 1990. Other career highlights include providing their juggling skills for “The Addams Family” movie, performing for Prince Charles and in the White House, and competing on two seasons of NBC’s “America’s Got Talent.”

Now based in California, the two do something daily to stay sharp, either working out at the gym or rehearsing the routine. Even so, no matter how many times they rehearse tossing running chainsaws, it’s always a little nerve-wracking.

“Chainsaws are probably the scariest,” Morse said. “There’s no good way to mis-catch a chainsaw.”

The Passing Zone has been awarded five Guinness World Records and 18 gold medals from the International Jugglers’ Association, but the duo said there’s less of an emphasis on breaking records today.

“The level of juggling in the show is still very high, but the show is more focused now on entertaining people,” Wee said.

To that point, Wee and Morse, bantering the same way they do during a performance, promised Chautauquans would be in for a treat if they come to the Amphitheater show.

“They will have the greatest night of their entire lives,” Wee said. “This could be the highlight of your life.”

“Yes,” Morse added, “especially if we save the world.”

Video: How to walk the Chautauqua Labyrinth