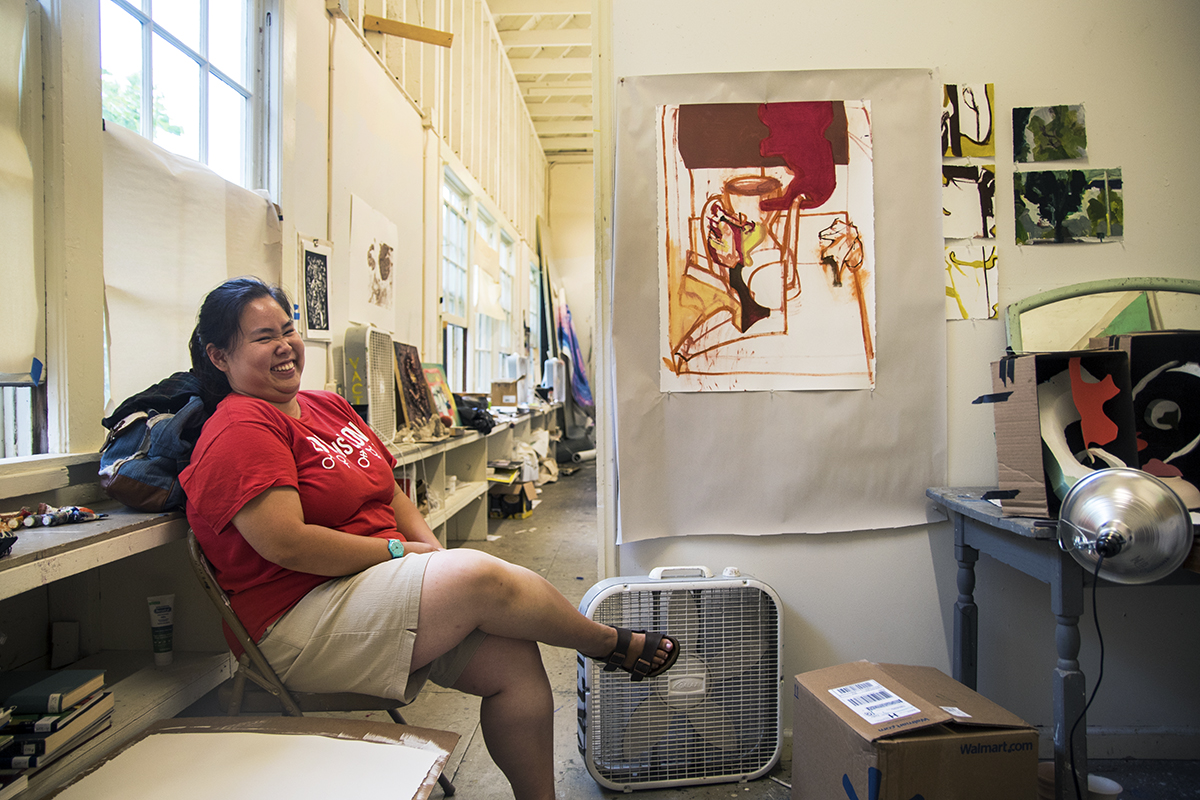 Painting student Phuong Nguyen sits in her studio at the School of Art on Friday, August 4. Nguyen primarily works with oil paint, and earned her B.F.A. from the University of Virginia. OLIVIA SUN/STAFF PHOTOGRAPHER

Inviting visitors is an unusual occurrence at the School of Art.

From 6:30 to 8:30 p.m. Monday in the School of Art studios, Chautauquans will have the chance to visit student studios, talk to the artists and purchase artwork.

“We look forward to it,” said Don Kimes, artistic director of Visual Arts at Chautauqua Institution.

Kimes noted that while many Chautauquans are curious about what the art students do on a day-to-day basis, having an audience is not generally conducive to the artistic process.

“There are people at Chautauqua who feel like they should be able to walk through the studios at any time, and that really creeps students out,” Kimes said. “It would creep me out!”

But nonetheless, solitude will be set aside on Open Studio Night.

“It’s so wonderful because the artists have got pretty much all of their work out from the summer, and you can talk to them and really find out how the summer’s gone for them,” said Betsy Vance, president of VACI Partners.

VACI Partners is sponsoring the event.

“To be able to go up and wander and see what everybody’s doing and talk to them — it gives you such a different perspective on the art,” Vance said. “It’s one thing to see it hanging in Fowler-Kellogg (Art Center), but it’s another thing to actually go into their studios and see what else they’re working on and where they’re headed.”

For Phuong Nguyen, a painter who earned her bachelor’s from the University of Virginia in 2015, her summer at the School of Art has offered a chance to take risks.

“I’m trying to step out of my comfort zone,” she said. “And it’s really nice to have no consequences … to not be graded. The point is to explore and just do new things and just be out there. It’s good to have the chance to do that.”

Nguyen developed an interest in art as a teenager, after her family moved to the United States from Vietnam. Nguyen was 13 and hadn’t yet learned English.

“In art class, you didn’t need to know English at all,” she said.

Art class was one place she could fully participate. Her interest in art grew and carried her through high school and into UVA’s art program, where she started painting.

Now Nguyen paints still lifes. For her models, she looks to odd shapes of paper, styrofoam scraps and other small objects that she places in dark boxes.

“They become these little structures that I can play around with, with light and shadow,” she said.

Nguyen thinks Open Studio Night will be a good way to celebrate before the art students depart at the end of Week Seven.

“It will be fun to have that many people come in,” she said. “You can never predict what the viewers will say about your work. Even though you think that something is really obvious, somebody could see something different.”

Brandon Lowery, another student at the School of Art, is primarily a sculptor, but has also been painting during his summer here. He listens to music while he works, songs like “Animals” by Baths, or Future’s “Mask Off,” over and over. Even on repeat, he doesn’t tire of the tunes.

As an undergrad, Lowery was a business major, then switched to graphic design before he finally found his way into the fine arts. For graphic design he was required to take some fine art classes. He took a ceramics class.

“Something clicked,” he said.

He said the experience at Chautauqua has been “surreal” at times.

“I feel like I’m in a TV show because everything’s manicured and perfect, and everyone’s friendly,” he said. “With the gates and everything, it’s a little … I don’t know what the correct word is for it — intimidating, maybe? It’s just — it’s different than anywhere I’ve been before.”

At the School of Art, having a community of artists made up of both students and faculty provides an opportunity to get feedback, he said.

“That’s not something you always get once you get out of school,” he said.

Casey Callahan, a rising senior at Nebraska Wesleyan University, has been working on  painting, printmaking and digital work while at the School of Art. She likes to do quick drawings to warm up and relax.

“I like the immediacy of doing something and not knowing what’s going to happen,” she said.

She’s looking forward to having visitors for Open Studio Night.

“People will see where we work and how we work,” she said. “I think all of us work in our own little ways, and it’s kind of cool to see how other people do.”

Thinking about the end of the art program, she said she’ll take new friendships with her.

“We’re all going to go to our other places, but we’ll still know each other,” she said. “We’ll have all these connections in different places now.”

Morning Worship: Sermons on the mound can lead to change, Hill says