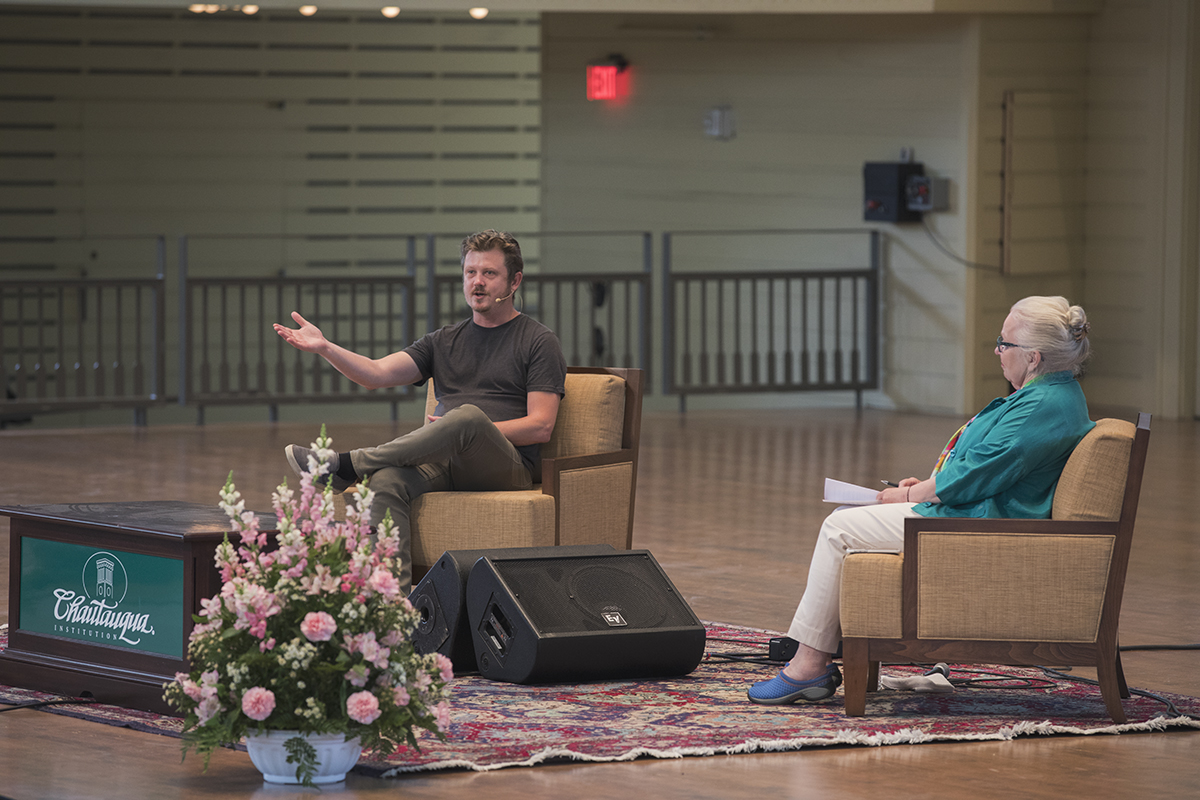 “We don’t submit to terror,” President Frank Underwood intones, directly addressing the viewer as he breaks the fourth wall. “We make the terror.”

It is the final line of season four of “House of Cards,” thus concluding show creator and screenwriter Beau Willimon’s involvement with the series.

And in terms both literal and implicit, it speaks to the subject of Week Seven: “The Nature of Fear.”

Friday morning in the Amphitheater, Willimon — who also co-wrote the award-winning film “The Ides of March” and has worked on the campaigns of several big-name Democrats — discussed that very theme with Chautauqua Institution Vice President and Emily and Richard Smucker Chair for Education Sherra Babcock.

First, though, Babcock wanted to explore the roots of Willimon’s artistry and ideology.

“There’s a theme in those people that you (have) worked for politically: They’re all Democrats,” Babcock said. “And yet both in ‘The Ides of March’ and in ‘House of Cards,’ your villains are Democrats.”

In addition to wanting to write what he knows, Willimon noted that he finds the idea of Southern Democrats particularly interesting, character-wise.

“The Southern Democrats that exist in places like South Carolina’s 5th District are people who have built their career more on relationships than ideology,” Willimon said.

This sort of politicking lends itself to writing Machiavellian characters like Frank Underwood.

Additionally, as a Democrat himself, having Democrats serve as his villains allows Willimon to avoid critiques of his work as overtly partisan, and instead gets people to focus on the narrative.

Transitioning to the week’s theme, Babcock asked Willimon’s thoughts on each of three types of fear: artistic, existential and political.

“I’ve been talking over the past few years to a lot of aspiring writers, a lot of students, and what I always sort of start off with … is the necessity of becoming comfortably uncomfortable with failure,” Willimon said, addressing artistic fear.

The fear inherent in staring daily at a blank piece of paper, and the risk of “rejection and humiliation” hanging over one’s head, makes writing a constant endeavor in courage.

“It’s that fear, in a way, that … brings the honesty to what you’re doing, to things you are confronting that you are afraid to confront,” Willimon said. “What are those demons that you have? What are those aspects of the world that are ugly or difficult that you want to confront and explore?”

But there is also a deeper, more universal fear, felt even by non-creatives: existential fear.

For instance, Willimon’s first thought as he wakes up every morning is that he will die. But to him it is a liberating, rather than morbid, mantra.

“When you start off your day with that, it places everything in perspective,” Willimon said.

And of course, as works like “House of Cards” have explored, politics are rife with fear, too.

This is evident on both the left — about health care, school access and civil liberties — and the right — about terrorism, gun ownership and government overreach.

“It’s really terrifying in some ways, the ways which the exploitation of those fears have diminished the impact of truth, of objectivity, and (of) the ability for large swaths of the population to actually connect and communicate with one another,” Willimon said.

Where artistic fear expands truth, he added, political fear can limit and even suppress it.

Noting Willimon’s active engagement on social media and the role it plays in contemporary political dialogue, Babcock asked: “Why Twitter?”

Given that Twitter allows politicians like President Donald Trump to speak directly to the populace, as well as for citizens to communicate with one another, Willimon said that it’s “extraordinary” how “you are able to reach so many people so quickly.”

But it has a dark side, too.

“People aren’t journalists — I mean, some people are — (but) the vast majority of people on Twitter aren’t, and when it becomes a source of news and a source of citizen punditry, it can amplify a distortion, or eschewing, of the facts,” Willimon said.

As an active tweeter himself, often in a partisan vein, he frequently wonders where the line is between propagandizing and pushing America toward a better future.

“Far more important to me is the political work I’ve been doing on the ground,” Willimon said.

Organizing face to face may require more of an actual commitment than posting online — in terms of time and energy and persistent focus — but “there still is no substitute for actual bodies meeting in the same political space.”

In fact, Willimon attributes some of liberals’ current electoral struggles with their lack of an on-the-ground organizational apparatus equivalent to conservative churches.

“The left historically had the union hall,” Willimon said. “(But as we’ve seen,) the dissolution of organized labor over the last several decades, for a whole host of reasons, the left sort of lost the union hall, and yet churches remain.”

Although gerrymandering, voter suppression and campaign finance also hurt Democrats’ chances at the polls, he thinks tackling those issues is a moot point unless more in-person coalitions are built.

Social media is a useful tool for organizing such gatherings, but cannot replace them.

“The anonymity of social media allows you to communicate without courage, often. … But when people gather in the same physical space, they have a collective courage,” Willimon said. “They see the power of themselves.”

Switching from the communal to the individual, Babcock asked Willimon about his own phobias.

“I write for myself,” Willimon said. “It’s a selfish act; I’m trying to please myself, first and foremost, and I hold myself to a really high bar.”

Then again, even if Willimon writes for himself, he still has to make that writing marketable for others. Therein lies the tension.

“I’m hearing you say there’s a fear that you won’t like your own work … but it also seems to me that there’s a market for the arts that could also threaten your success at being able to get the message out,” Babcock said.

In response, Willimon discussed the controversy surrounding The Public Theater’s recent production of Shakespeare’s Julius Caesar, which portrayed the titular tyrant as Trump up to, and including, his assassination at the hands of the Roman Senate.

The production prompted backlash, including some centuries-late calls for a boycott of the playwright, and corporate patrons Delta and Bank of America cut off their funding.

“The decision to pull the money … sent the message that legitimized punishing the arts for taking risks and being political,” Willimon said.

The ordeal prompted a public debate between those who believe art should stick to nonpartisan entertainment and those who, like Willimon, believe that “all art is political.”

“It’s crucial, in fact, to support art that may disagree with your political worldview,” he said. “And the reason for that is, if art’s job is to create dialogue, to create a space where we can discuss things in an open and honest way, then you have to be willing to engage with viewpoints, with worldviews, that are different than your own, that indict your own.”

But should that argument be used to promote funding art that glorifies, for example, the Ku Klux Klan?

Willimon doesn’t know; the idea makes him “squirmy.” Even having such a conversation is important, though.

“This was a moment where we had to ask ourselves: Are we moving into a phase of our nation’s history where we may see more artistic suppression?” Willimon said.

Their dialogue near its conclusion, Babcock asked Willimon whether any of his upcoming projects deal with fear.

The answer is that, like many of his past works, they will.

One, a television show about a manned mission to Mars, addresses existential fears like the terror of being so far from Earth. Another, a Broadway adaptation of Henry Becque’s La Parisienne that trades 1800s Paris for Trump-era D.C., explores “House of Cards”-esque political fear.

The third — a film about the conflict between Elizabeth I and Mary, Queen of Scots — deals not only with all three types of fear but also with more positive emotions that can exist alongside fear.

“While these two women were pitted against one another, they also were the only two people who could understand one another,” Willimon said.

“To me, that facing of one’s fear and going straight into it despite being afraid is what real courage is; whether that’s artistic courage, whether that’s political courage or whether that’s just the courage of getting up every day no matter what obstacles you’re facing, and saying, ‘I choose to walk forward as opposed to (hiding),’ ” Willimon said. “Courage is about not being afraid. It’s about acknowledging and embracing your fear.”