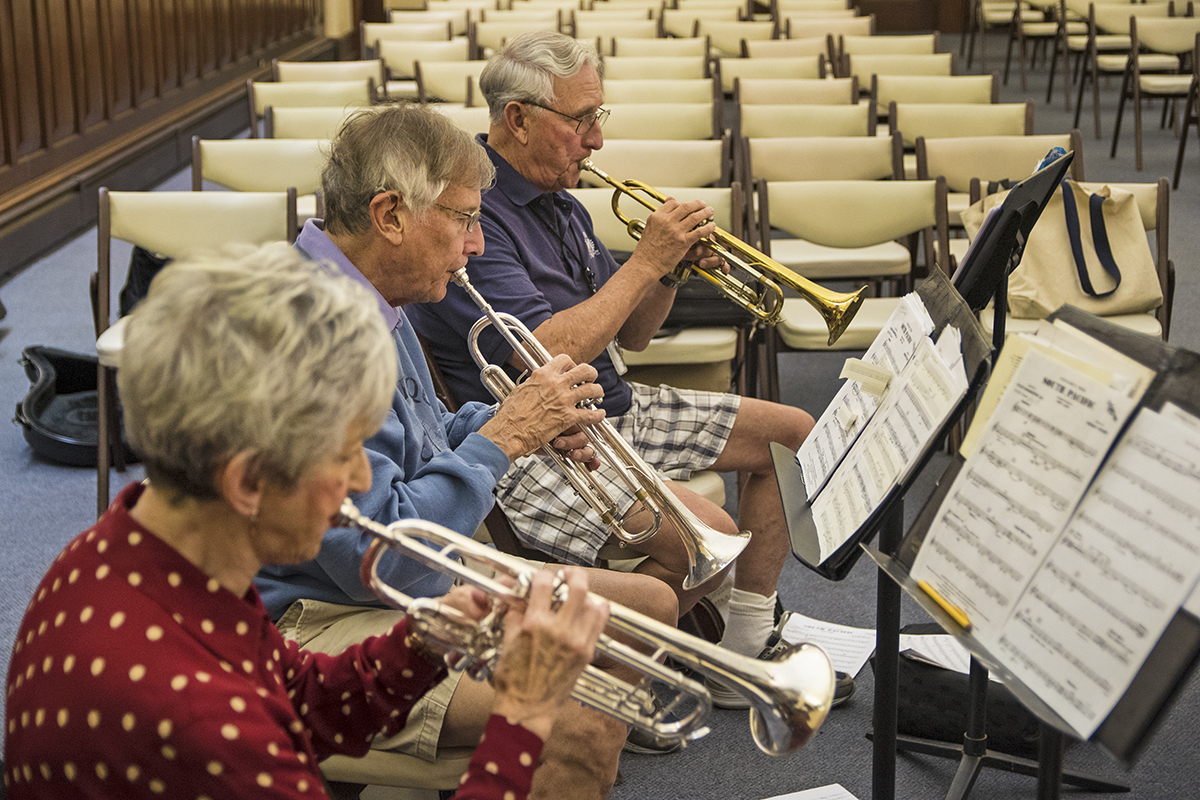 Retired high school counselor Charlie Tea can’t play one-on-one pickup basketball anymore. He can, however, pick up his trumpet and play a tune. In fact, Tea currently plays trumpet for three different music groups around the grounds, all under the umbrella of the Chautauqua Amateur Musicians Program.

“It gives some of us who aren’t professionals a nice chance to play,” Tea said.

A brainchild of Joe Prezio, former C.A.M.P. coordinator, the C.A.M.P. initiative offers a place for Chautauquans — many of whom are amateurs — to play and, in some cases, perform throughout the season.

“(Prezio) played tuba, banjo and piano and he (saw) a need early on for some playing outlets for amateur musicians — there just weren’t any for small groups around here and there seemed to be a need to have some music at some function somewhere,” Tea said.

Thursday Morning Brass is the most active of all the groups. They rehearse every Thursday morning in the Hall of Christ and play approximately eight or nine gigs throughout the season.

“Our major mission with all the groups … is to ask for donations,” Tea said. “All donation money goes toward scholarship funds … for the young people in the music school here.”

If you’ve ever attended the Craft Shows at Chautauqua, Children’s School Carnival or Fourth of July celebrations on the grounds, then you may have heard Thursday Morning Brass performing. You may also have seen the hat they put out to collect donations in.

All money earned by the C.A.M.P. groups is given to the Chautauqua Fund and goes toward a scholarship for a student in the Music School Festival Orchestra. This year’s recipient of the annual C.A.M.P. scholarship is Paul Radke, a trombone player from Overland Park, Kansas.

“None of us are paid; we all volunteer our time and our talents,” Tea said. “Last year we donated roughly $2,500 to the scholarship fund.”

Tea, who is the current C.A.M.P. coordinator, has been playing trumpet since he was 8 years old, although he only started playing at Chautauqua 10 years ago.

“I was strictly a classical musician, never played jazz, never played pop, and when I got here I had to learn it (all),” Tea said. “It really, for me, has been a real epiphany — for lack of a better word. My playing has improved, my reading has improved. … It’s just really amazing.”

A music major in college and retired high school band director, Tea said one thing that strikes him about C.A.M.P. is how his fellow musicians share his need to play.

“It’s something we can do in our elder age,” Tea said. “It’s very gratifying.”

Fred Gregory, who plays tuba for Thursday Morning Brass, the Chautauqua Brass Ensemble and Dixie Lakesiders, hadn’t played in 40 years before he joined C.A.M.P. Gregory, who’s 73, appreciates the positive aspects playing music has for the mind.

Many of the C.A.M.P. members — totaling between 30 and 35 musicians spread across the various groups — are retired, although they will occasionally have students join them for concerts.

Retired music teacher Nancy Waasdorp plays French horn for Thursday Morning Brass and Chautauqua’s Brass Ensemble and said she enjoys the opportunity to play with a group of people.

“I love the people,” Waasdorp said. “It’s my band family. It’s a lot more fun to play with others and make some music rather than just practicing alone at home.”

Dixie Lakesiders will be playing for the last time this year from noon to 1 p.m. Aug. 20 at the Chautauqua Fire Hall.

Thursday Morning Brass will be performing — with the hat out in front of them — from 12:15 p.m. to 1:15 p.m. Sunday on the Colonnade steps. They also have their Annual Final Concert from 4 to 5 p.m. Thursday in Elizabeth S. Lenna Hall.

“We enjoy being here at Chautauqua and we enjoy playing music here,” said Larry Katz, music director of Thursday Morning Brass. “We feel that we are making a contribution to Chautauqua as a society and as a culture.” 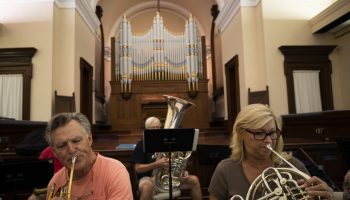