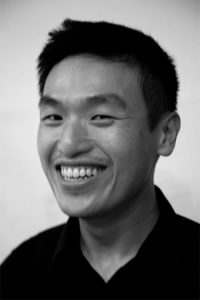 Lam’s three pieces, which will be performed by some of Chautauqua Opera’s Young Artists this season, use works from poets who will be on the grounds this summer as part of the Chautauqua Writers’ Center and Chautauqua Literary and Scientific Circle.

Over the course of the off-season, Lam contacted authors participating in Chautauqua’s 2018 programming, and he found poems that he believed would pair well with music.

“I just took the words and made it into a song,” Lam said. “The idea is that the artists would be working with me and would get the chance to meet with the poets and the writers who are behind these words. It’s to have more synergy between the two.”

The first piece will be performed at Thursday’s first Afternoon of Song Recital by soprano Kayla White. The song, titled “Sissieretta Jones, Carnegie Hall, 1902” from O patria mia, is a poem from Tyehimba Jess’ Olio. The book won the Pulitzer Prize in Poetry last year, and Jess spoke at Chautauqua on Tuesday, June 26.

The second piece, “Underwater Acoustics,” will be performed on Saturday July 14, at the Opera Highlights Concert. Lam based it on the poem of the same name by Rajiv Mohabir, who will join the Writers’ Center during Week Three.

Lam is still working on the third piece, titled “Such a Sweet Sorrow,” based on work from poet Allison Joseph, who will be in residence during Week Six.

Lam said poetry has a natural rhythm to it when spoken, so he found recordings of Mohabir to overlay in the piece. Lam even had White record herself reading the poem out loud to get a feel for how her voice worked naturally with the piece.

Lam also listened to the recordings of the performers to better understand their vocal ranges.

“I filter that into what I do. On top of that, that gives a lot of guidelines and restrictions, so I can push against that,” Lam said. “I could say, ‘Yes, let’s try to figure this out,’ or, ‘No, let’s try to push against it and see what happens.’ ”

Lam likes the collaborative effort of working on the three pieces.

“Composing is still very largely a solitary activity, though in this case I’ve been in touch with a lot of different people,” Lam said. “It feels more like a collaborative effort, which helps.”

The summer is the perfect time for Lam to compose because he is teaching or working for Rhymes with Opera during the rest of the year. Lam co-founded the opera company in 2007, and it has since commissioned 17 operas ranging from one-minute pieces to full-length productions.

Lam is an assistant professor of music and coordinator of music at York College, The City University of New York, where he mostly teaches general music courses and music theory. He also teaches an individualized study in composition.

Lam is still trying to juggle teaching and composing, so he uses the summer and winter seasons to write the bulk of his music.

Lam was born in Hong Kong and moved to Winthrop, Massachusetts, when he was 12. He learned to play violin and piano, but the middle school he attended didn’t have an orchestra. He took a band class, where he played percussion and started to learn more about other instruments. That’s when he first realized he wanted to be a teacher.

He earned a bachelor’s in music from Boston University and continued his education in the master’s program at the Peabody Conservatory in Baltimore, finally earning a doctorate from Duke University.

People often ask Lam what his hobbies are, and he draws a blank almost every time because music is the first thing that comes to mind.