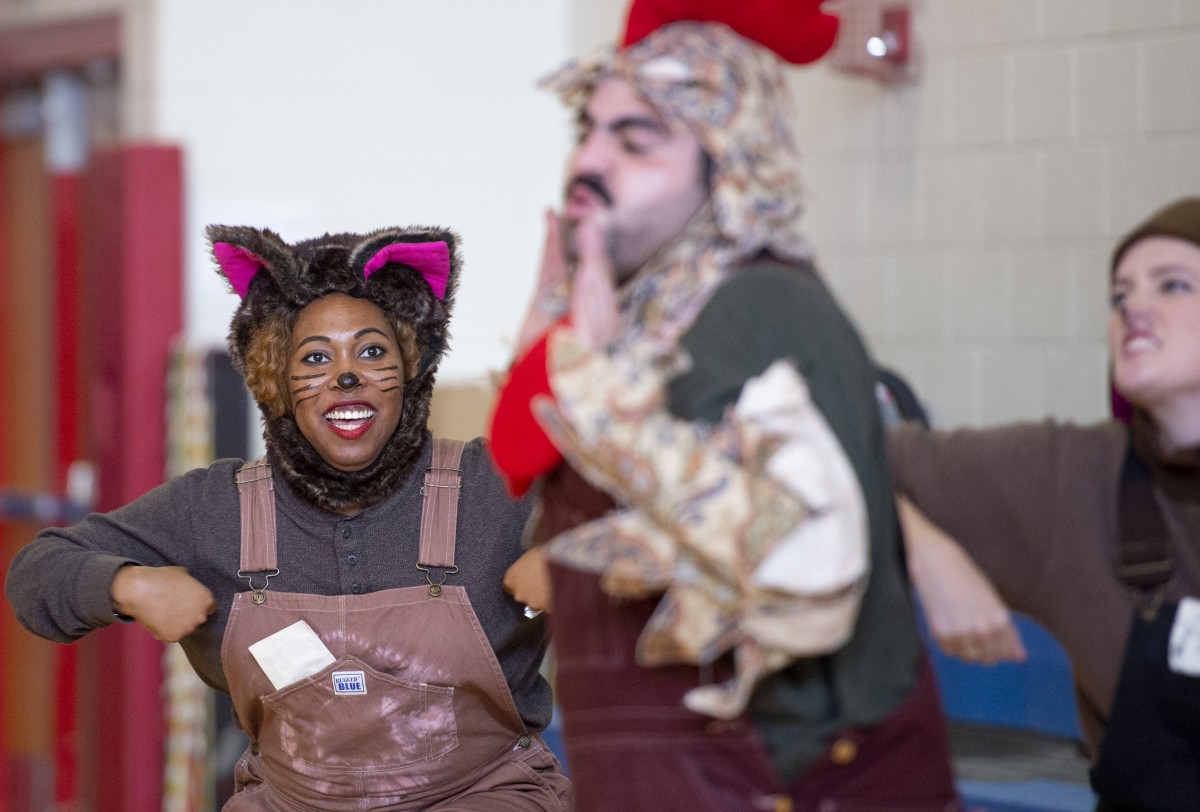 When four of Chautauqua Opera Company’s Young Artists had the opportunity to teach elementary students, they had no idea it would help them fall in love again with opera.

“To step away for a couple weeks, to get back to why we do it, helped me reconnect with opera,” said Young Artist Kimberly Hann.

The artists traveled to 16 schools in Chautauqua County in eight days during the pre-season to teach elementary students and per- form a 45-minute opera. The Young Artists taught the basics — from dynamics to timbre — and how to connect the libretto to emotions.

And in the process, the artists were able to “bring the walls down and bring the community in,” said Young Artist Patrick Dean Shelton.

The program was a collaborative effort between the Department of Performing and Visual Arts and Chautauqua Opera. Support for Chautauqua Institution’s Arts Education Initiatives, including Chautauqua Opera Invasion, has been provided by Paul and Marnette Perry, the Western New York Foundation, the Greater Washington Community Foundation and The Goldin Foundation for Excellence in Education.

The main goal of the program was to reach the students where they live and to provide an engaging experience, said Suzanne Fassett, director of arts education.

“The whole goal is to encourage these students to realize opera is for them,” Fassett said. “Opera is not some long, far off, distant thing only special people do.”

The four artists performed John Davies’ The Bremen Town Musicians, a fairy tale about four animals who unite to help the town of Bremen. The cast and crew comprised Hann as Barcarolle the dog, Shelton as Eddie Pensier the rooster, Brandon Bell as General Boom the donkey, Kayla White as Dorabella the cat and Kaley Karis Smith as stage director. A lot of thought went into choosing which opera to per- form. Fassett and Steven Osgood, general and artistic director of Chautauqua Opera, evaluated New York State and English Language Arts Common Core standards to find a piece that would appeal to the pre-kindergarten to sixth-grade audience. They found that every grade focused on narrative and characters.

“We would be going into an elementary school and we wouldn’t know if we would be in the classroom with fourth-graders or fifth-graders or sixth-graders, but that almost didn’t matter because, in each of those years, they’re dealing with character and narrative,” Osgood said.

Before the performances, the Young Artists would go into the classrooms and teach. The students played “So You Think You Can Sing Louder Than An Opera Singer?” and four of them were chosen to perform with the artists on stage.

“This one little girl, I told her, ‘You know, you really sing well,’ ” Fassett said. “She just had this amazed look on her face like, ‘Nobody has ever told me that.’ You could tell it meant so much that someone validated her.”

The program received positive responses. Teachers were happy to see the ideas they taught in the classroom reflected in the opera, Os- good said. “That was incredibly rewarding to see how it was connecting with the kids in the schools and the teachers,” Osgood said. “The thing that was the icing on the cake was the performers were getting something out of it.”

Bell loved encouraging other students and giving back. He thinks fondly of all the people who encouraged his love for music, and he hopes he did the same for those children.

Shelton was unsure how this experience would affect him, but now he wants to take what he has learned and teach other students in Chicago, where he lives.

“I just love the way (the children) react,” Shelton said. “In an impoverished school, I think it could make a student want to come to school.”

Because the program was so successful, Osgood and Fassett are looking to improve and reach more people next year.

“We didn’t know what the demand would be,” Osgood said. “The value of it has been proven and exceeded, so now we can come out of this season and say, ‘OK, we’ve proven the value of this. Now how can we keep this going? What can we do now?’ ”