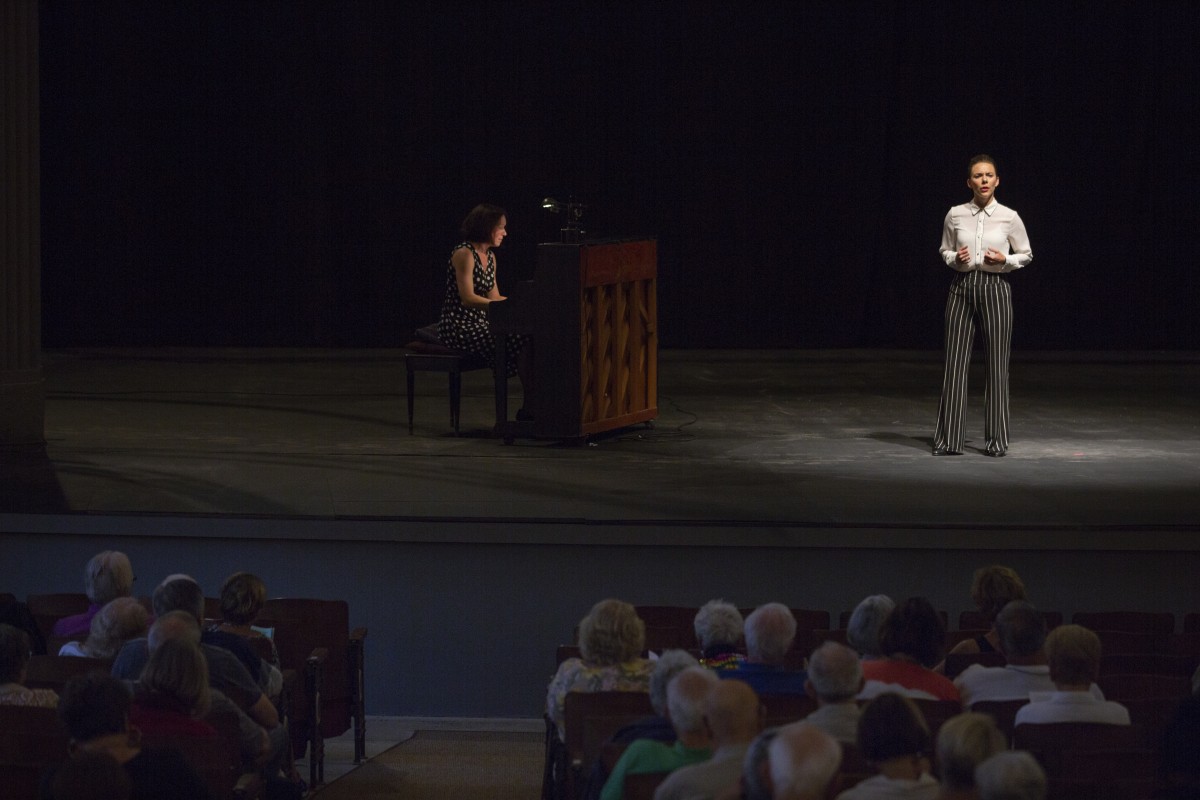 The orchestra pit had been covered up, which Osgood said would enhance the viewing experience for Chautauqua Opera’s performance of Candide on July 27 and 30.

Though Chautauquans will not be able to see the performers in Candide until late July, they had a chance to familiarize themselves with the show’s performers.

John Reisen, a tenor who will assume the role of the title character in Candide, gave a commanding performance of “Maria” from West Side Story at the Sing-In. All 24 Young Artists per- formed pieces in their repertoire and gave the audience of about 100 people a taste of what it can expect in Chautauqua Opera’s season, which includes performances of Don Giovanni, Candide and As One. The company’s opening work, Mozart’s Don Giovanni, will take place July 7. Returning Young Artist Helen Hassinger will portray Donna Anna, one of Don Giovanni’s conquests. At the Sing-In, soprano Hassinger performed “Chi il bel sogno di Doretta” from Puccini’s La rondine.

Soprano Rebekah Howell, who was a Studio Artist in 2014 and 2017, performed “Par le rang et par l’opulence… Salut à la France” from Donizetti’s La fille du régiment.The soprano will appear in Don Giovanni as the peasant Zerlina and as Cunegonde in Candide.

Davis winked and pointed at the audience, which induced laughter from patrons. Davis will take on the role of Maximilian in Candide.

Tenor Dennis Shuman also garnered laughs from the audience during his performance of “The Contest” from Stephen Sondheim’s Sweeney Todd. Shuman will appear in Don Giovanni as Don Ottavio.

Though the Young Studio Artists will not appear as lead roles throughout the season, Chautauquans will get to know them during Afternoons of Song every Thursday until Aug. 2, as well as Opera Invasions and the Studio Artists Opera Scenes.

One Young Artist people will have the opportunity to watch is soprano Kayla White, who performed Mascagni’s “Voi lo sapete” from Cavalleria rusticana. White will also perform in the Family Friendly Opera, which is part of the Family Entertainment Series, on July 17.

Osgood directed the Young Artists as they sang the two-word libretto: “Chautauqua Opera.” Along with Sunday’s Opera Invasion, Chautauquans will have another opportunity to see the Young Artists in action when they workshop three libretti, The Summer Place, by Jerre Dye based on interviews and observations in Chautauqua. Dye visited Chautauqua in 2016 and created “A.E. Reverie,” “The Century Upon Us” and “The Hearts and Minds of Self-Made Men.” The workshops are open to the public and will take place from 1 p.m. to 6:30 p.m. Saturday in McKnight Hall.