The building was “closed for installation” according to signs on the doors, but the fourth-graders were there for a sneak peek into two exhibits that will open to the public next week.

Before the tour, Judy Barie, Susan and Jack Turben Director of Galleries, laid out the most important rule for the nine- and 10-year-olds:

White shepherded a group upstairs to the exhibit “ROY G BIV,” which features the titular colors of the rainbow in various sculptures and paintings.

The fourth-graders were each drawn to different pieces. They picked favorites because they were “cool,” “different shapes” and “squiggly.” They each saw different things in the paintings.

When White asked if they saw a bird in one piece, she was met with a chorus of “no’s.” “See?” she pointed. “The beak is here, his head is here.”

The students still disagreed. White announced it was time for the second part of the tour. “Help me up,” said Gavin, 10, seated on the floor. Chase, 10, extended an arm. They bounded down the stairs with their classmates.

While the students seated themselves at tables offering blank color wheels and pink plastic cups filled with crayons, Barie instructed them to fill in the wheels.

“I think you need some more orange there, buddy,” Barie told Kentrell, aged nine. After contemplating for a moment, he nodded and reached for a new crayon.

“I messed up,” panicked his neighbor, Jenilisse, also 9. She displayed her color wheel for Barie, who assured her it was fine if her coloring had bled outside the lines.

Next, they headed to the Melvin Johnson Sculpture Garden outside Strohl. The students were equally fascinated by the sculptures as they were by a snaking coil of a windchime on the porch behind them.

The fourth-graders saw a spider, a sea urchin and an explosion in the sculpture.

On the way to the last part of the tour, Chase and Gavin tossed the latter’s Yankees cap back and forth. Chase said he liked art-oriented field trips. Gavin didn’t — he liked sports better.

“The only reason I don’t like art is ’cause I can’t draw,” Gavin said.

By the time they reached the “Ties That Bind” exhibit in Fowler-Kellogg, the students were antsy, but no less intrigued by the pieces —comprised of lace and intricate lines — on display.

Assistant Director of Galleries Erika Diamond, who curated the exhibit, brought the kids to a collection of small sculptures made of fishing lines and asked what they saw. The students’ answers: shells, doughnuts, bean bag chairs, lemons and croissants.

Before they left, they saw one more piece in “Ties That Bind.” One of the students stood with his nose nearly pressed up against the painting.

Support for Visual Arts Gallery Field Trips has been provided by James and Mimi Gallo, The Kindness Foundation, and Gloria Plevin.

CTC season tackles the issues of the day through contemporary voices 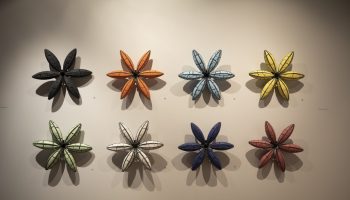 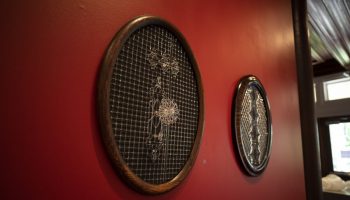 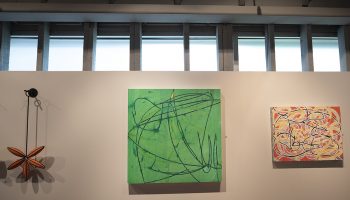 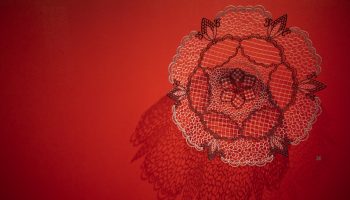