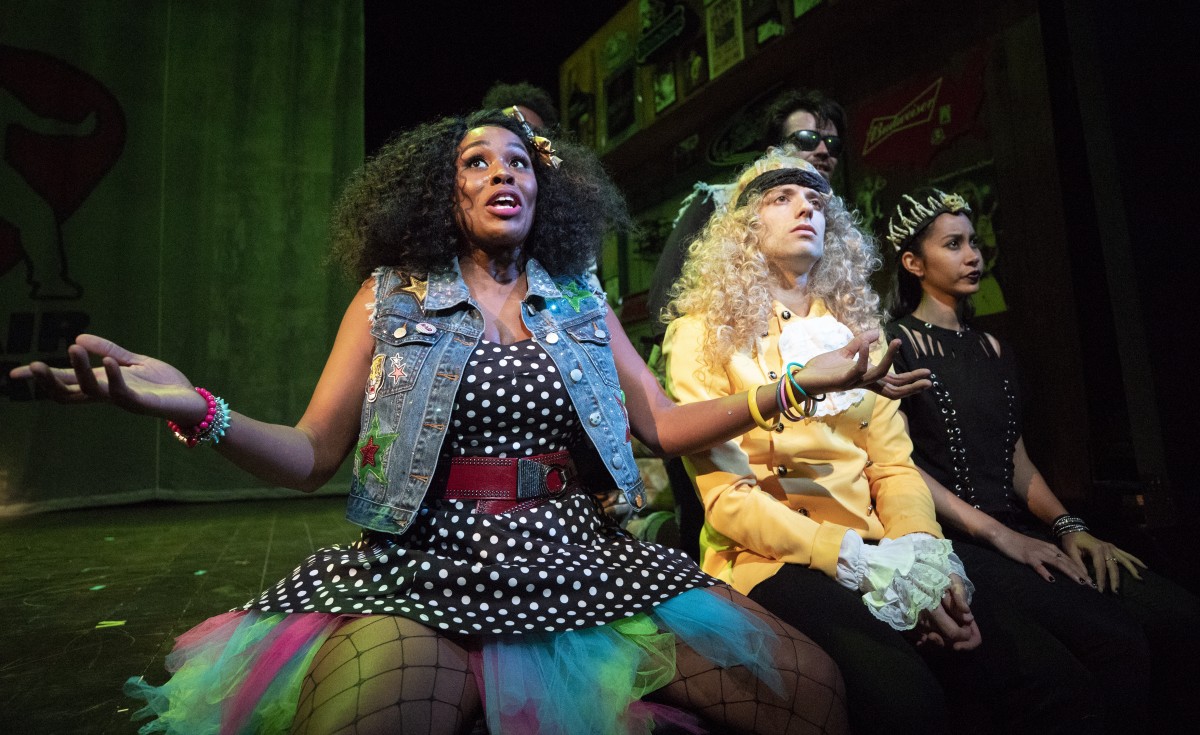 Every year, air guitarists from around the world gather in Oulu, Finland, to compete to be the best at playing an invisible instrument. Costume designer Mary Eggers said she used performers like Nicole “Mom Jeans Jeanie” Sevcik, Alexander “The Jinja Assassin” Roberts and Justin “Nordic Thunder” Howard as her inspiration for Chautauqua Theater Company’s production of Airness, a play that pays tribute to the international air guitar community.

“You sort of have to approach it like a period show because these people exist,” Eggers said. “You have to do the actual people research and learn as much as you can without being in the world before you feel comfortable putting clothes on (actors) and feeling authentic.”

The current international air guitar champion, Matt “Airistotle” Burns, not only appeared on Egger’s Pinterest board, but also came to Chautauqua this summer to coach the actors on their routines and educate them on air guitar culture. Airness continues its run with performances this weekend at 2:15 p.m. on Saturday, July 21, and 2:15 and 8 p.m. on Sunday, July 22, in Bratton Theater.

The play follows Nina O’Neil, played by conservatory actor Jerrie Johnson, as she enters the world of air guitar and develops “The Nina,” her on-stage character that is referred to as a “persona” in the air guitar world. Johnson said Burns taught the actors that personas can develop in one of two ways.

Some characters in the play, like Astrid “Cannibal Queen” Anderson, take on the role of villains. Much like heel fighters in professional wrestling, these air guitarists make the audience love to hate them.

Conservatory actor Octavia Chavez-Richmond said she believes that her character, unlike most women, found the air community on her own rather than through a boyfriend or husband. Since then, Cannibal Queen developed a reputation for being the most technically proficient guitarist on a male-dominated circuit.

“She’s kind of the woman to beat in the air guitar community,” Chavez-Richmond said, “which is a big accomplishment.”

Eggers said that much of Cannibal Queen’s costume was dictated by the script, which mentions hair extensions and leather pants. Other elements, like her blood capsules and crown of bones, were added to increase the persona’s villainy.

Eggers also used the script to guide the costume for Ed “Shreddy Eddy” Learie, a diehard fan of The Ramones from Chicago played by conservatory actor James Smart. Since Sheddy Eddy is described by another character as “an angry record store dude,” Eggers said she channeled Jack Black and Tenacious D when designing the character’s denim vest.

“The first rabbit hole I felt down with that was Sgt. Pepper’s Lonely Hearts Club, but that was too extreme,” she said. “I liked the military jacket costume idea because (Rosenberg) had a British twang in his performing, but we had to scale that back.”

After talking with the director, Joshua Kahan Brody, Eggers found a suitable coat on Amazon. To complete the costume, Eggers gave Rosenberg a blond wig inspired by The Who’s Roger Daltrey.

“He has the best hair chronology in the world, so we settled on this curly rocker look which I think is working really well,” she said. “He’s got a great classic look and he’s so different from everyone else and I love his yellow pop of color.”

Each character in Chelsea Marcantel’s script embodies one of the six pillars of air guitar, which include feeling, charisma and the titular “airness.” For Gabe “Golden Thunder” Partridge, played by conservatory actor Elijah Jones,

Eggers said she embraced the pillar of originality by making his costume look like it was made with a glue gun after a trip to Jo-Ann Fabrics.

Eggers said that while she stayed true to her source material, she also exaggerated some elements to better fit the theatrical stage.

Costume design fellow Jennifer Clark said that because the costumes in Airness were made to look like were crafted by the characters themselves, the costume shop’s only significant struggle was making the patches sewn on to a character’s jacket look like they were placed haphazardly rather than by design.

“It’s been great because we’re not building anything from scratch,” Clark said. “We had a lot of time to focus on the embellishments and details that we’re putting into the costumes which you don’t always get to do.”

Eggers said she found the most difficulty designing Nina, whose many costume changes mark the passage of time in the play. Unlike other characters, Nina does not show up to competition wearing her persona’s costume, meaning Eggers had to compile a contemporary wardrobe for the character.

A web designer from New York, Nina had to initially look like an outsider to the air guitar community, Eggers said. To find the right look, Eggers said that Johnson’s feedback in costume fittings was crucial.

“That’s the challenge with contemporary costuming, because it might look great on the actress and the actress might love it, but it might not be right for the character,” Eggers said. “I think we settled on some really fun things.”