“Ahimsa” means nonviolence or non-injury in Sanskrit. In the 1940s, “ahimsa” was being referred as a nonviolent resistance method in the freedom movement in India. In 2017, Supriya Kelkar published Ahimsa, a fictional book for middle school readers. 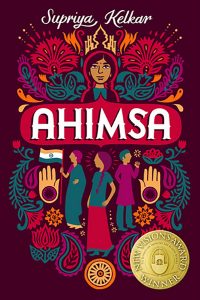 At 12:30 p.m. Wednesday, Aug. 1, in the Pier Building, CLSC Young Readers will explore Ahimsa in an activity led by Dave Griffith, vice president and Emily and Richard Smucker Chair for Education.

Ahimsa is fiction, but Kelkar said it is based on her great-grandmother‘s true experience. In the author’s notes, Kelkar wrote that the character of Shailaja, who quits her well-paid job working as a secretary for a British captain to join the freedom movement, is inspired by her great-grandmother.

In the book, Shailaja and many other freedom fighters believe that they not only need to free India from British colonization, they also need to free themselves from the unfair caste system.

Shailaja, mother of the 10-year-old protagonist, Anjali, tells her daughter that “people are people, regardless of their religion or caste.”

According to Shailaja, many beliefs are superstitions, which “are just tales passed down generation to generation for a societal purpose.”

“This irrational fear of people, calling them Untouchable, that is probably all there just to keep the status quo,” Shailaja says in the book. “To keep things as they are. To not challenge the system. But it’s wrong, Anjali. It’s just plain wrong.”

Kelkar said Shaila’s words come from the stories Kelkar had heard about her great-grandmother.

“India has a lot of shadism, where some people are prejudicial to people who are darker-skinned than others. I know that (my great-grandmother) used to tell her daughters and children that (skin color) is not a reason to discriminate,” Kelkar said. “Everyone is a person. And everyone is beautiful the way they are.”

Kelkar said a lot of the social justice issues in her book are “really relevant to what’s going today,” even though the book is set in India in 1942.

“I would want (the Young Readers) to think about who’s being marginalized, who’s being centered in the conversation we have and what can be done about it.”

Kelkar also wants the Young Readers to know “just how powerful their voice is, and how they can change the world and their world by using their voice and standing up for what is right.”

Kelkar said social justice issues on the news can feel “overwhelming” at times, but she thinks “we shouldn’t be quiet about them, and we shouldn’t just let it happen.”

To do something about these issues, Kelkar said there are many methods, including ahimsa, marching or writing a letter.

“I guess everyone can figure out what’s right for them in the situation,” Kelkar said, “what’s the right way to react to get the results they want.”

Kelkar said through the concept of ahimsa, people in India successfully gained independence. Ahimsa is not the only method for people to stand up for what is right, but it is indeed a method that “anyone can have access to.”

“With war, people have specific tools or weapons that they want to use,” Kelkar said, but not everyone has access to these.

“Like in the book, there are many forms of this passive resistance,” Kelkar said. “Gandhi led people to the sea to get salt from the sea because the British were taxing salt, which is a necessary nutrient that people would die without. There was making homespun cotton into clothing. There’s lots of ways people could use this idea to speak up or speak out against injustice.”