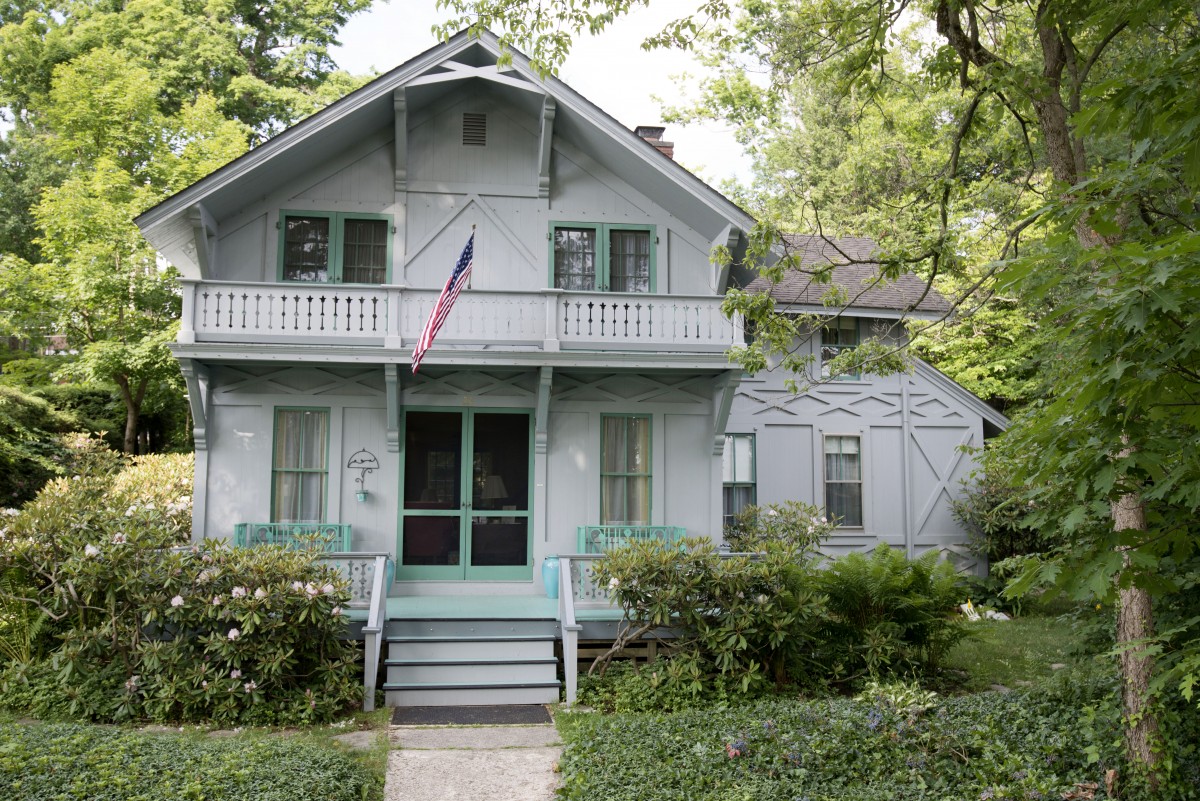 When Akron native, inventor and co-founder of Chautauqua Institution Lewis Miller set out to build a cottage for himself on the grounds in 1874, he wanted to construct a residence that was stylish and charming; one that would not only be a good fit for him and his family to spend their summers in, but also capable of entertaining prestigious guests who visited the Institution.

Over the next 140 years, the cottage remained in the Miller family, hosting prominent members of American society such as President Ulysses S. Grant, former President Rutherford B. Hayes, political diplomats, musicians, and artists. Miller’s daughter, Mina Miller Edison, and her husband, Thomas Edison, purchased the cottage in 1920 and hired “pioneer landscape architect” Ellen Biddle Shipman to design the gardens at the cottage.

Almost a century and a half later, the cottage was put up for sale on the private market in 2016. Longtime Chautauquan and philanthropist Tom Hagen saw the importance and value of this National Historic Landmark. Hagen decided to donate funds for the Chautauqua Foundation to purchase and ultimately transfer ownership of the cottage to Chautauqua Institution.

Now, foundation board vice chair Karen Goodell and Institution trustee Bob Jeffrey are co-chairing the Miller Edison Cottage and Garden Committee to ensure its preservation for the Chautauqua community.

The committee is hosting a benefit event on July 19 and invites Chautauquans to purchase tickets to attend a special evening in Miller Park, including a guided tour of the cottage and garden, impersonators of historic figures, live music, heavy hors d’oeuvres, an open bar and opportunities to learn more about the projects and efforts to restore the garden and cottage.

“(The cottage) is one of three houses that the Miller-Edison family occupied that are still in original condition,” Jeffrey said. “They look exactly the same as they did, down to the books on the wall, as the day that the Edisons left.”

Jeffrey and Goodell have experience in multiple efforts that aim to restore and preserve pieces of architecture at Chautauqua Institution. Jeffrey is chair of the Architectural Review Board, which reviews “architecture-related issues that affect structures and open spaces throughout the Chautauqua grounds.” Goodell was instrumental in the restoration and repurposing of buildings such as Bratton Theater during her time as chair of the Renewal Campaign.

“I think Miller Edison Cottage is different than (previous projects) because it was a home, and it’s going to remain a home,” Goodell said.

The Institution hopes to utilize the space for staff housing, rather than using the cottage for something different than originally intended in its construction.

In the spirit of maintaining the cottage’s original condition and restoring the garden, Jeffrey, Goodell and members of the committee are fundraising for three different objectives. First, there are necessary capital improvements of the cottage to stabilize it for future use. This is a fragile aspect of the project because the Institution is not seeking to alter its historical value, according to Jeffrey.

“This house, to me, embodies everyone’s presence at Chautauqua,” Jeffrey said. “Everyone should feel ownership of that house to make sure that it stays and is protected for the future.”

The cottage will be restored based on consultation from preservation architect and partner Jeff Kidder from Kidder Wachter Architecture & Design, with the goal of restoring it in a historically correct manner. Some of the needed improvements include refinishing floors, repairing ceilings, restoring windows and other features that will make the space safe and comfortable to stay in. For this aspect of the project, approximately $1,000 of the $97,000 goal has been raised. Thanks to a prior matching gift from Hagen and the generous community response, an endowment for future maintenance has already been raised for the cottage.

In addition, the committee is raising money to restore the garden in a form consistent with a Shipman-designed garden and endow it for future preservation and maintenance.

The majority of funds raised will go toward supporting and endowing the garden. For garden support to fund capital construction costs, $77,000 of the $215,000 goal has been raised.

These projects include reinvigorating a diversity of perennials, shrubs and trees, as well as restoring pathways, a stone terrace, small pool and fountain. Chautauqua’s Supervisor of Gardens and Landscaping Betsy Burgeson has detailed plans for reinvigorating the garden, based on site analysis and recommendations from Shipman expert Patricia O’Donnell.

Once the garden is restored, its endowment will ensure future maintenance and preservation for years to come. Currently, $110,000 of the $675,000 goal has been raised.

All the fundraising efforts are part of the same initiative to guarantee the cottage and gardens stand as “architectural testaments” to the Chautauqua community. Goodell sees this as a unique opportunity for all Chautauquans to come together and maintain the Institution’s National Historic Landmark.

Additionally, the committee is hosting a free, public event for Chautauquans of all ages at 4:30 p.m. on July 20 in Miller Park. This educational program will highlight the history of the Miller Cottage.

“It is now our community’s responsibility to fund the remaining dollars needed to make sure that it remains as it once was,” Goodell said.

Visit chq.org/miller-edison-cottage to learn more about these projects, to make a gift or pledge of support, or to purchase tickets to attend the July 19 benefit event in Miller Park. Must be 21 years of age or older to attend. Tickets are $150 per person, with 50 percent of the cost being a charitable contribution. Tickets will not be sold at the event; please purchase in advance no later than July 18. Contact foundation@chq.org or 716-357-6243 with questions.