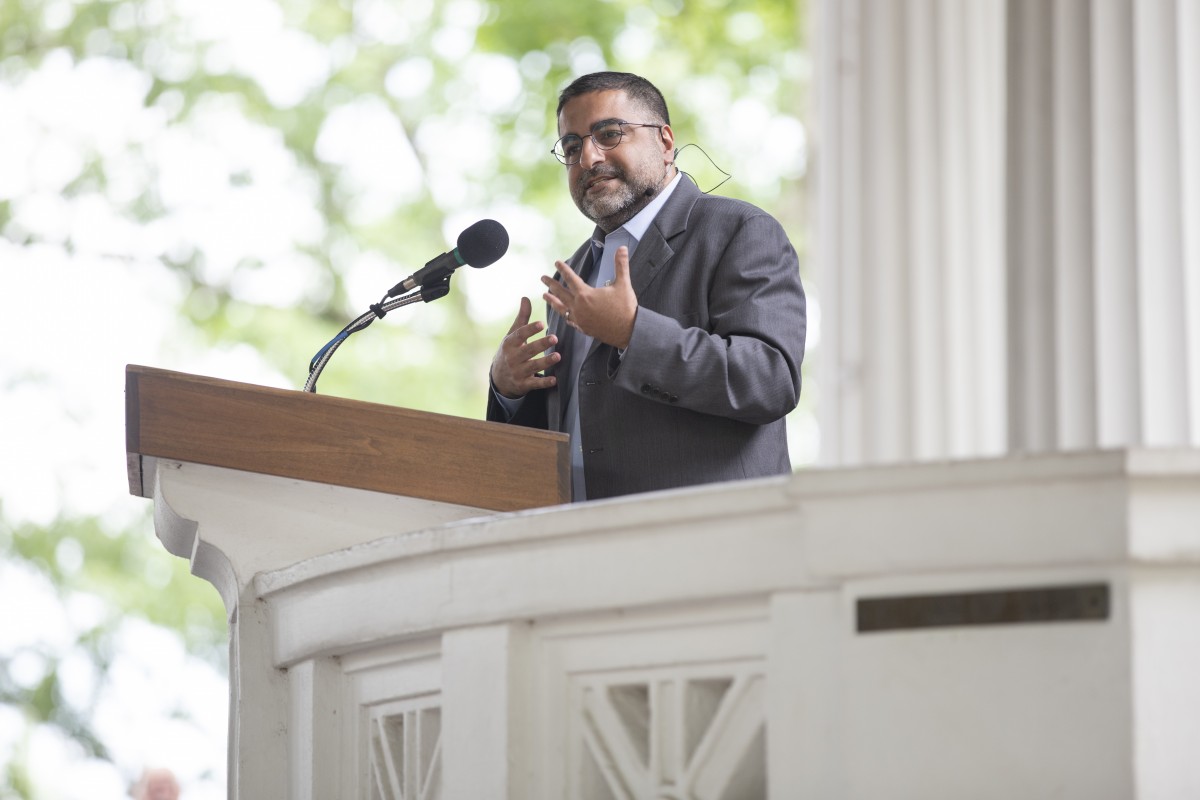 It did not require a Buddhist, a Christian and a Jew walking into a bar for Hussein Rashid to know the intersection of religion and humor is, in fact, a laughing matter.

At 2 p.m. Tuesday, July 10, in the Hall of Philosophy, Rashid, founder of islamicate, a consultancy focusing on religious literacy and cultural competency, delivered his lecture “Riding Backwards: Laughing and Learning with Muslims” as part of the Week Three interfaith theme, “The Spirituality of Play.”

“I have always found joy in my faith, whether it is in the rituals or in service to others,” Rashid said. “We don’t even have to think of these things as religion or spirituality. They aren’t expressions of faith, they are about human interaction. We know the Divine through each other.”

There is a long history of humor and play in Muslim traditions, and Rashid said the greatest repository of this humorous material is found in short stories. On top of the comedic aspect, there are deep underlying lessons in each narrative.

“Like all good stories, these tales cause empathy and bring the reader or listener to identify with at least one of the characters in the story,” Rashid said. “These stories are a way to involve people in their own learning. It will reveal significant truths that would otherwise be uncomfortable to address directly.”

The first of a series of stories Rashid told was about Abraham’s wife, Sarah.

In this story, Sarah is an old woman who is not expected to have children. However, one day, angels arrived to announce to Abraham that he will have a child. Sarah overhears the announcement and laughs.

“It reads very humorously because there is a gentle mocking here,” Rashid said. “But it is not a mocking out of meanness, it is a level of intimacy that we as readers or listeners are invited to through this humor. We are invited into that moment with them, to share that special moment and realize that the power of God is infinite.”

The next story was about Moses’ call to ministry.

Moses was out in the fields when he saw a light coming from a distance. As he started walking toward the light, he sees that it is a burning bush. The voice of God comes through the bush and asks what Moses was holding in his right hand. According to the Quran, Moses replies: “This is my staff. I can knock down leaves from a tree with it, I herd my sheep with it, and for me, there are many other uses.”

To Rashid, the humor in this story clearly lies in the strange circumstance of God approaching Moses through a burning bush, but the lesson lies in the nervous energy displayed by Moses as he tries to prove his power through the use of his staff.

“In the presence of a true power, his arrogance is challenged so that he can accept a role that he is ultimately destined for,” Rashid said. “To have us, as believers, see God directly chastise Moses would undermine Moses’ authority. To have Moses face his own ego in front of the Divine allows him to enter his own transformation and invites us then as believers to understand our own product for God.”

Next came a story about the Prophet Muhammad’s grandsons, Hasan and Husayn ibn Ali. The two brothers saw a man carrying out his ablutions, a ritual purification before prayer, incorrectly. Rather than correct him, they asked the man if he would judge which of the two did their ablutions better. The man agreed, and as he watched them he realized that he had been doing it wrong all along.

This story is not necessarily humorous, although it does serve as an important bridge between stories from the Quran to the tales that are used for teaching. They all share common themes of empathy, mercy and principles of correct behavior.

“Rather than feel trespassed by two small children, and therefore embarrassed to practice his faith, the man learned from his own failures and learned to better himself by watching those with more knowledge. And he did so without being belittled,” Rashid said.

Following this story was a tale of a character referred to as a mullah.

“A mullah is the smartest person in the room,” Rashid said. “He is both the figure of respect and of ridicule.”

“The moral for us is that there are different types of education and one is not necessarily better than the other,” Rashid said. “In this instance, what we see is a respected mullah, who is always shown learning but being arrogant of that knowledge.”

Rashid then tells a second story of the mullah.

The mullah had been invited to a grand dinner. On the day of the dinner, he had been traveling and it was raining, so he was late. Instead of arriving even later by neatening his appearance, he came as he was: soaking wet with his sleeves rolled up and his hair tousled.

“When he came to the dinner, people ignored him,” Rashid said. “They kept their distance, and no one offered him anything.”

So, the mullah left, changed clothes and put on his nest coat. As he walked into the hall for the second time, people rushed to greet him. They wanted to be his friend, and so they gave him the best of the food at the dinner. The humorous aspect to this story is that as he took the food, he smeared it all over his coat.

“People gasped and asked him what he was doing,” Rashid said. “He said he had come previously without a coat and no one cared about him, but he came with the coat and everyone loved him. So, the coat must be the true guest of honor.”

This story serves as an example of a society too quick to judge people based on appearance or perceived circumstances, Rashid said.

“We should not focus on the coat alone, but the person wearing the coat,” he said.

The last story Rashid told is one he said to be a story of everyone in the audience.

After he finished reading the details of the ride, Rashid asked the audience if they knew how old the bus driver was.

“The bus driver is as old as you are because you are the bus driver,” he said. “Many people do not realize this because they are so focused on the passengers getting off and on, assuming I would ask how many people are on the bus.”

According to Rashid, the audience forgetting that they are the bus driver is in fact the lesson of the story.

In the end, Rashid said he believes these stories challenge others to think about their place among other people, as well as the place of God in their lives.

“Let’s play with these stories, let them open our doors to perception and let them bring us joy,” he said. “Let us embrace that play and that joy and that humor and let us share our stories with others so that they, too, can be part of our web of love and worship.” 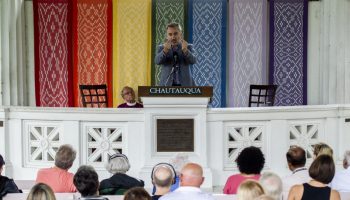