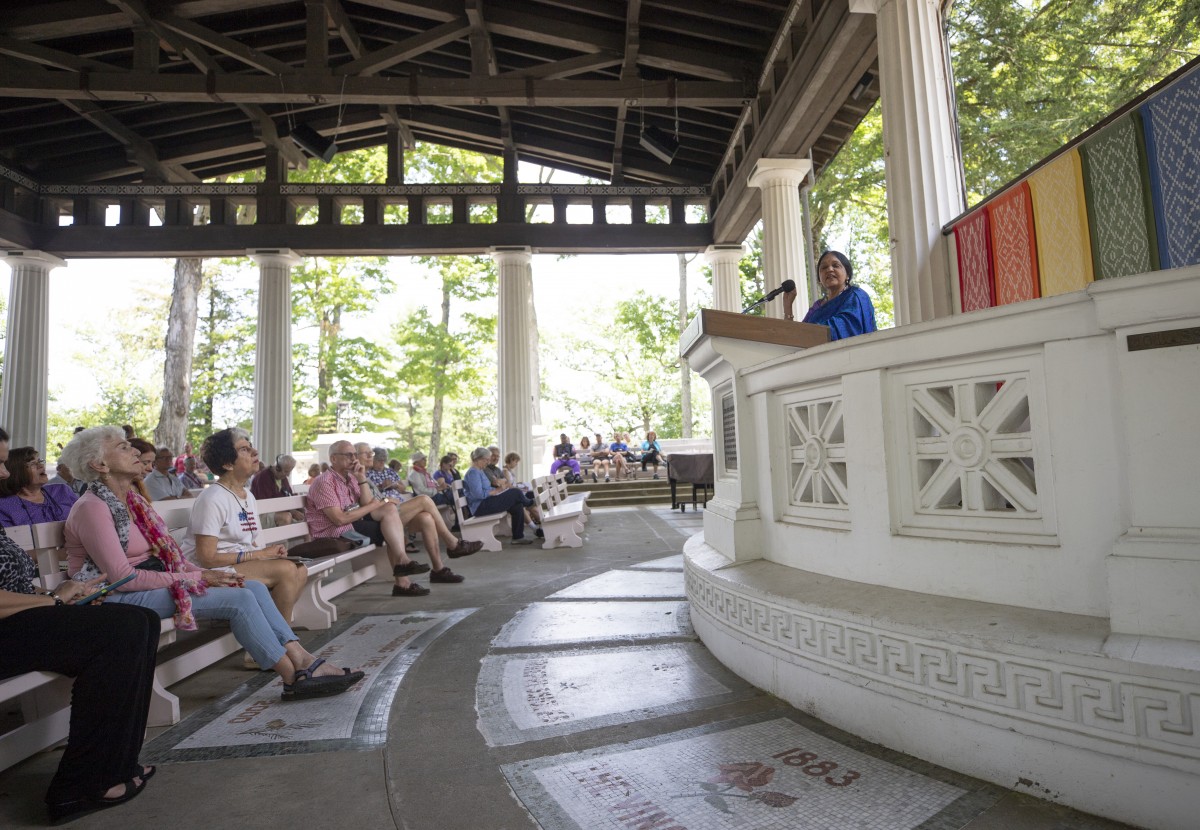 Unlike the vast majority of world religions, Hinduism has no one founder, no single scripture and no commonly agreed upon set of teachings. However, Vasudha Narayanan doesn’t mind the uncertainty. To her, it is all just part of the game.

At 2 p.m. Wednesday, July 11, in the Hall of Philosophy, Narayanan, a distinguished professor in the department of religion at the University of Florida, discussed the importance of play within Hinduism during her lecture, “Creation, Recreation and the Joy of Play,” as part of Week Three’s interfaith theme, “The Spirituality of Play.”

Just like the four sides of a board in a board game, Narayanan complied four sides, or perspectives, to explain the importance of playfulness in the Hindu faith.

For the first side, she began with a story that centered around Krishna, an incarnation of the Hindu god Vishnu. The story started with several kids playing outside with mud and sand. The kids playing with Krishna started to laugh because he was shoving the mud into his mouth. After hearing the commotion, Yasoda, Krishna’s mother, came outside to see what was going on. The kids told her what Krishna had done, but even with mud smeared across his face, Krishna denied eating any. Yasoda asked him to open his mouth wide so she could find out the truth.

“She saw within his mouth all moving and non-moving entities, outer space and all directions, along with mountains, islands, oceans, the surface of the earth, the blowing wind, fire, the moon and the stars,” Narayanan said. “She also saw the senses, the mind, sense perception and the three qualities: goodness, passion and ignorance. She saw the time allotted for the living entities, natural instinct and reactions of karma, and she saw desires and different varieties of bodies, including herself.”

As Yasoda looked into his mouth with astonishment, she realized Krishna was the Supreme Being and surrendered herself to him.

“This (story) evokes a sense of wonder, a sense of enchantment, enjoyment and engagement with life and creation itself,” Narayanan said. “All those who participate in the story are drawn to the wonder and playful nature of God.”

For the second side of the board, she examined the evolution of the game “Chutes and Ladders.”

The game originated in India, where it was called “the ladder to the Supreme.”

The design of the very first version of the game encompassed five ladders to move up and 12 snakes, as opposed to slides, to move down.

“This tells you how much easier it is to slip down than it is to go up,” Narayanan said.

When the game was brought to England in 1892, it was called “Snakes and Ladders.” By this time, the design had changed to increase to number of ladders to equal the number of snakes.

“It signified the culture and idea that for every sin a person commits, there is an equal chance of redemption,” Narayanan said.

Next, the game was brought to the United States, where the name was changed to “Chutes and Ladders” to make it more “playground friendly,” she said.

“In America, the moralistic tone was more subdued (and) very subtle,” she said. “The emphasis was on child-friendly good deeds: mowing the lawn or saving the little kitty from the tree branch.”

The messages in the American game differed from the Indian version in ethical and theological ways, but Narayanan said there was one message that always remained the same.

“The new games are actually aligned with the very life-affirming, happiness-invoking values of Hinduism,” she said. “The traditional board game actually focused on the passage to salvation (and) how to get there.”

The path to salvation is what brought Narayanan to the third side of her board.

The morals necessary for reaching salvation were learned through games like “Chutes and Ladders” that provided lessons about fate, devotion and generosity.

“Although these are only single words with a ladder close to them (in the game), most Hindus would know that these virtues exemplify characters of stories,” Narayanan said.

Due to low literacy rates in India when the game was first created, Hindus traditionally learned of  stories through the performing arts: drama, music and dance. According to Narayanan, this was a successful way to convey morality because the Hindu people believed the actors would become the characters they were playing.

“The love that the mother had for a child, or the lover had for a lover, is portrayed so realistically that they invoke these emotions enough, at least superficially, that people were really able to feel them,” she said.

The fourth and final side revolved around “Lila,” meaning “divine play” or the “play of creation.”

One of the foundational Hindu texts describes God’s creation of the universe as a form of play. The idea is that God is not motivated by any kind of desire because he is not lacking anything.

“There is nothing you stand to gain for the creation, maintenance and destruction of the world; these come by sheer play,” she said.

Because of the playfulness in God’s creation, Narayanan believes the destiny of people on earth is to reach their own playful and supreme state of bliss, the fine liberation called “Moksha,” or the separation from the cycle of life and death.

“This comes with surrender or being in alignment with the ultimate power of the universe,” she said. “When one has grace, one is no longer playing the music for will, for money, but to wind away the time, to play the music for the sheer enjoyment until that release comes.”

After discussing the four perspectives she does know, Narayanan said it is important to note that there is one element of play that is still a mystery: the reincarnation of the Supreme Being.

“The Supreme Being transcends the binaries created by our puny minds,” Narayanan said. “(Rabindranath) Tagore (a writer) speaks about this world as a playhouse; he says that in this earth, ‘In this playhouse of infinite forms I have had my play and here have I caught sight of Him that is formless.’ ”

Narayanan concluded by quoting a poem by Tagore, the first Indian Nobel Prize winner, to express her gratitude to both the Institution and the audience for providing a space she can share a “playpen of ideas.”

“Where the mind is without fear and the head is held high/ Where knowledge is free,” she quoted from the poem. “Where the world has not been broken up into fragments/ By narrow domestic walls/ Where words come out from the depth of truth/ Where tireless striving stretches its arms toward perfection/ Where the clear stream of reason has not lost its way into the dreary desert sand of dead habit/ Where the mind is led forward by thee/ Into ever-widening thought and action/ Into that heaven of freedom, my father, let my country awake.” 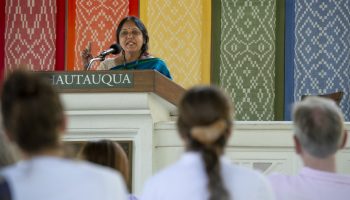 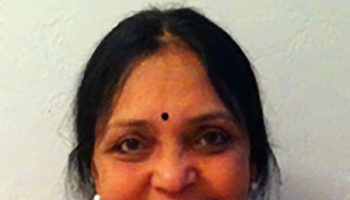