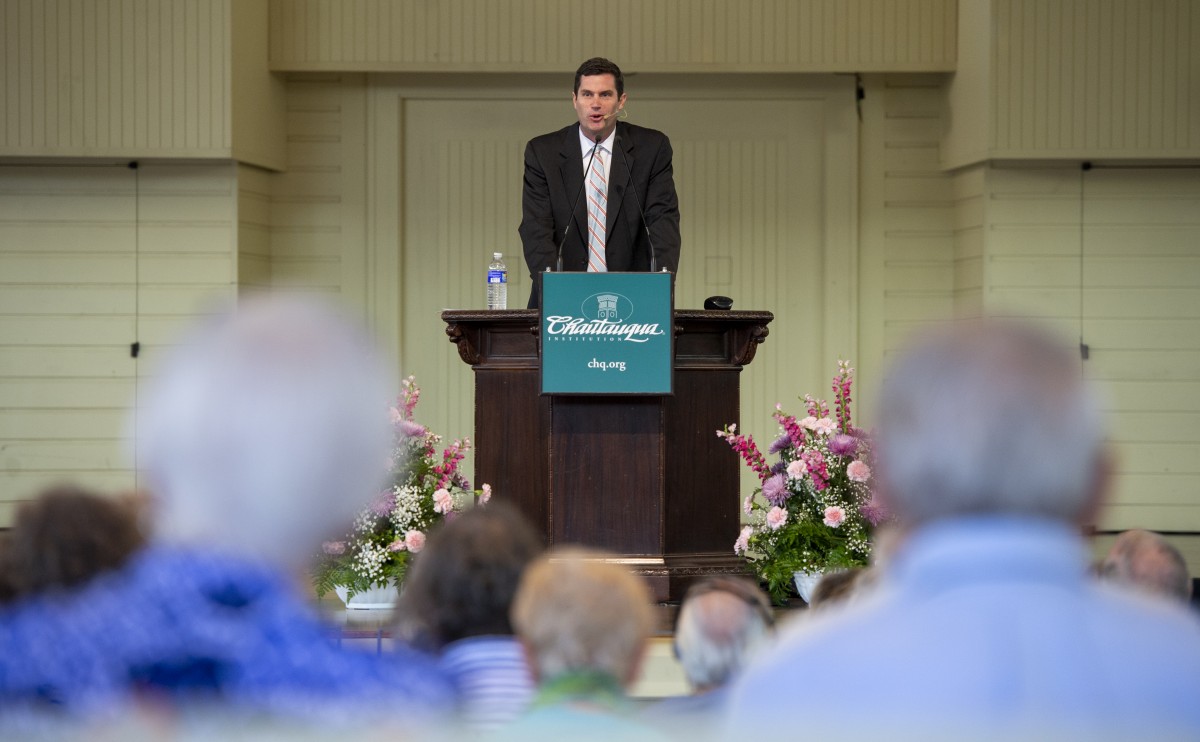 Malak and Romy were drastically divided — Romy is Israeli and Malak is Palestinian. Their backgrounds left them bitterly opposed to each other, but basketball and PeacePlayers International brought the girls together, bridging their differences and creating a long-lasting friendship on, and off, the court.

Brendan Tuohey, co-founder and executive director of PeacePlayers, spoke to sport’s unique ability to unite people, like Malak and Romy, at the 10:45 a.m. morning lecture Thursday, July 12, in the Amphitheater, putting a full- court press on Week Three’s theme, “The Art of Play.”

“There’s been a long-standing debate about the role of sport and its impact in society,” Tuohey said. “For some, sports is all about competition, with the main goal being one side vanquishing the other. And, yes, there are a lot of instances about sports serving as a divider, … But just as sport has the capacity to overinflate feelings of nationalism, prejudice and sometimes leads to violence, it also has the unique and powerful power to advance social cohesion.”

Tuohey and his brother, Sean Tuohey, founded PeacePlayers to “(unite) communities in conflict” and educate thousands of young people in the Middle East, Northern Ireland, South Africa, Cyprus and the United States through basketball and other sports.

The Tuohey brothers both played sports in high school and eventually college. After college, Sean Tuohey coached basketball in Northern Ireland, a region where Catholics and Protestants are sharply segregated. Catholic and Protestant youths are separated by neighborhoods, schools and sports — Sean Tuohey saw the power of basketball as a way to bring youth together.

A friend suggested the Tuoheys’ approach would be beneficial in South Africa. The brothers rallied $7,000 from friends and family and created PeacePlayers International.

During its time in South Africa, PeacePlayers used its platform as an educational resource to inform people about HIV and AIDS, which was a growing epidemic in the post-apartheid country. Eventually, the Tuoheys’ organization gained enough traction to bring a white school into a primarily black township for a basketball game — something that was unheard of at the time.

“(The white students were) greeted by a thunderous ovation of cheers and the two captains of the teams exchanged flags, the kids played on mixed teams,” Tuohey said. “The South African broadcast channel interviews kids and the coaches and the parents afterward to get their reaction. There was one common refrain from both, from everybody — ‘I was afraid, it was great, let’s do it again.’ ”

Throughout history, sports have always had the power the Tuohey brothers captured in PeacePlayers, like when the newly democratic South Africa hosted and won the 1995 World Cup, or when British, French and German troops ceased fire and conversed over a soccer game in the “Christmas Truce of 1914.”

Because of its overwhelming influence, sport has been adopted by organizations as a way to create change. The United Nations has listed sport as a “means to promote education, health, development and peace.”

“Why sport?” Tuohey said. “It’s universal, right. Go to a soccer game, and it’s the same thing you see in Brazil and South Africa. It’s a level playing field; it doesn’t matter how much money you have, what color you are, where you come from. (The) question is, ‘Can you play?’ Competition brings people together, to achieve a common goal. Sports draw people, often young people, to activities that open the doors to education, to job training and to avenues to improve their lives.”

However, competition, while it may dilute conflict, is not enough, Tuohey said. To find “positive peace,” where “opposing groups are able to constructively manage disputes and interact non-violently,” societies need to look across party lines and form relationships, which peace studies stress is the most important factor.

“What better way to get this done than sport?” Tuohey asked. “Sport provided the platform to develop positive relationships — to see people that might look different or come from different backgrounds as human beings and to be judged on who we are, not the color of our skin, our religion or how wealthy we are.”

Tuohey turned the audience’s attention to the screen behind him and a video of the Israeli girls’ under-18 national basketball championship. The team won thanks to a down-to- the-wire two-pointer. In a fit of excitement, the girls, five Palestinian and five Israeli, embraced one another as parents ran onto the court.

“What other vehicle could make that happen other than sport?” he said.

At first, one of the Israeli team members was hesitant about playing with Palestinians. Tuohey described how she would attend intermittently, often just watching from the sidelines and not telling her parents about the program, fearing they would disapprove. Eventually, she picked up the ball, with her parents’ support. At the end of the season, her father invited the team over and expressed his love for the team, despite their backgrounds.

This fall, she will be playing on the first mixed-Israeli-Palestinian women’s professional team in the Middle East.

PeacePlayers replicated the Middle East program in Cyprus. According to Tuohey, Cyprus has been divided since the 1970s after the invasion of Turkey into the island nation. In the first years of the PeacePlayers Cyprus branch, which was located in the buffer zone, attendance and interest was low. Eventually, interest was piqued, Tuohey said, and for the first time in two generations, people crossed the border between the Greek and Turkish occupied Cyprus.

“I think one of (the) real special things about sports, and what we’ve been able to do, is that we make things happen that weren’t happening before,” Tuohey said, “and people see it — whether it be a white school going to a black township (in South Africa), a Catholic kid playing rugby with a Protestant kid or a Palestinian kid playing in an Israeli national league.”

After the conclusion of Tuohey’s lecture, Vice President of Marketing and Communications and Chief Brand Officer Emily Morris opened the Q-and-A. She asked what PeacePlayers is measuring for in terms of success and how it’s doing.

Tuohey said that the organization is tracking how children are creating positive relationships through and outside of the program. They are measuring this through evaluations and questionnaires.

Morris then opened the floor to the audience. An attendee asked what the gender balance was across the programs. Tuohey said in Israel, the ratio was 70-to-30 girls, but in other countries, the mix is more balanced.

“You look at the need, particularly in Palestinians and the stigma around sports, we felt really strong that we (needed to) give girls opportunities to play, which has led to them advancing their own college educations and self-confidence,” he said. “For us, it’s important to work with both (boys and girls).”

To close the Q-and-A, Morris asked what the next five years look like for PeacePlayers. Tuohey said in the next two years, the organization will be working on developing more programs in the U.S.

“Unfortunately, there is no shortage of need for the type of work that we do, and I think it’s becoming increasingly clear that that work is needed back here in our country,” he said.