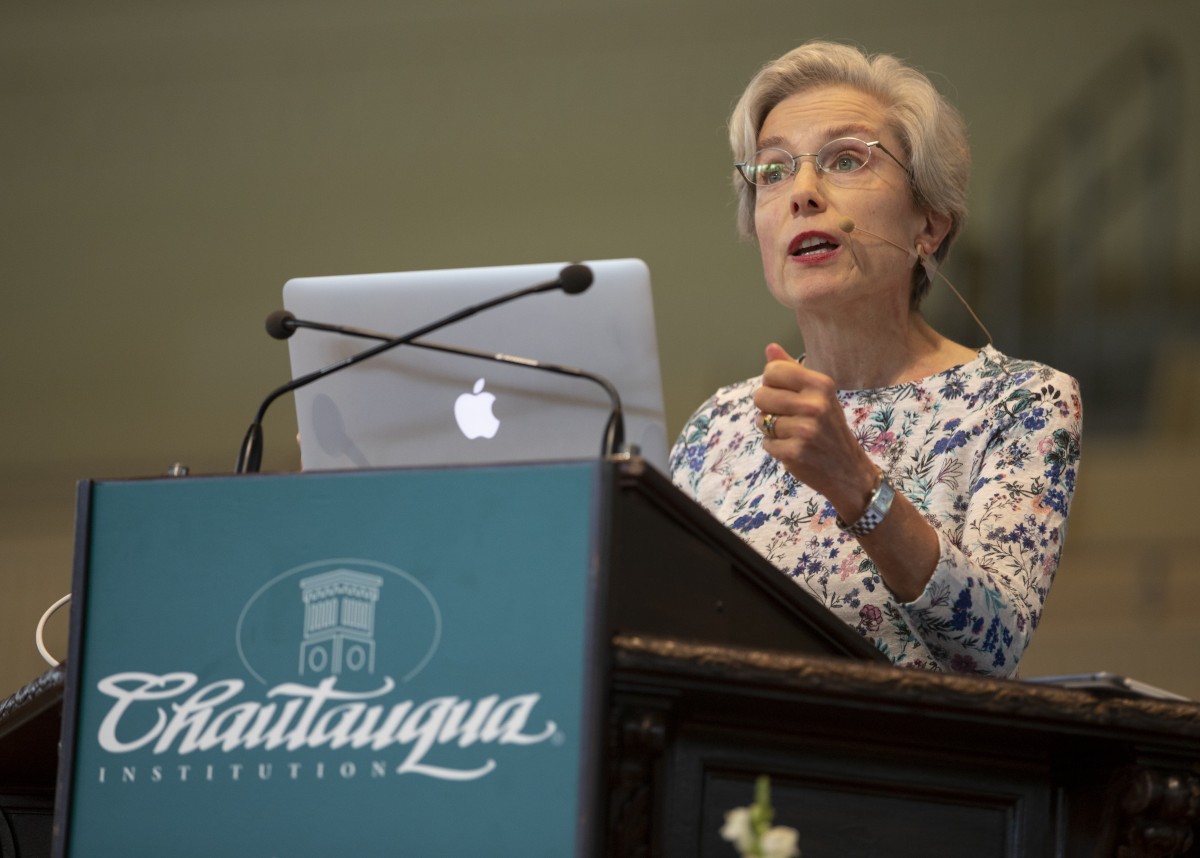 Abby Smith Rumsey, author of "When We Are No More: How Digital Memory Will Shape Our Future," lectures Thursday, August 16, 2018 in the Amphitheater. RILEY ROBINSON/STAFF PHOTOGRAPHER

Historian and author Abby Smith Rumsey discussed stewardship of the past, present and future at Thursday’s 10:45 a.m. morning lecture on Aug. 16, titled “Will Digital Memory Erase Our Past.” Her Amphitheater lecture, part of Week Eight’s theme, “The Forgotten: History and Memory in the 21st Century,” was accompanied by various alarms — car, carbon monoxide, truck and phone among the bunch.

“The questions we have been contemplating this week — how and what should we remember — are fundamentally moral questions about our obligations to other generations, as well as to ourselves,” Rumsey said. “And the real question that I have for us today is ‘What will people know about us in 100 years? How will they come to understand our actions, the things that we have done and the things that we failed to do that will stun them in historical perspective?’ ”

As a historian, Rumsey’s work focuses on the creation, preservation and cultural recording in the media, which are prominent topics in her book, When We are No More: How Digital Memory Will Shape Our Future. She served as director of the Scholarly Communication Institute at the University of Virginia, and she worked with the Library of Congress’ National Digital Information Infrastructure and Preservation Program (NDIIPP) for more than a decade.

Her work with the NDIIPP involved strategizing how to identify, collect and preserve digital content of value.

“There is a very real threat, people tell me, that digital memory will erase our past because it is so easy to erase digital memory,” she said.

Digital memory is fragile, Rumsey said. Despite hardware’s ability to store exabytes of data — one exabytes being 1 billion gigabytes — it is impossible to retrieve digital information without a computer; an MP3 can’t be “picked up” and listened to without a compatible device. Moreover, data has been privatized and commoditized by Amazon, Google and Apple, she said.

And while digital has its dilemmas, physical records can also be cumbersome. Rumsey referenced a picture of the Library of Congress in 1897, featuring overflowing piles of records. Eventually, the piles were catalogued, indexed and shelved, but within 10 years, the collection had once again outgrown its space.

As for humans, Rumsey said collecting and documenting memories is not considered important until it is too late.

“People don’t always agree with what memory is,” she said, “and they seem to neglect the fact that it is a natural endowment given to all living beings and has a fundamental biological function, no matter how culturally important it is.”

Humans have various types of memory, Rumsey said, including genetic memory and learning.

Genetic memory is uniform coding in DNA that informs aardvark cells to become a fertilized aardvark egg and eventually an aardvark, rather than an elephant or a human.

Learning is the modification of an individual by an experience or environment, she said. For example, When sea slugs feel pain or pleasure, there is a biological response; the same applies for humans, which advertisers have caught onto, she said, with the use of attracting — and distracting — colors.

Memory is a survival mechanism, Rumsey said; the brain’s perception of the world is based on previous observations, and the conscious mind is only alerted to unexpected occurrences, which saves memory space and keeps the most relevant information fresh.

Rumsey stressed that although the brain ages and information is lost, forgetting a name or date is part of the brain’s survival technique: pushing the less pressing information to the back of the mind.

Primitive archival efforts to extend the life of the human memory came from the Sumerians’ early cuneiform tablets used to track goods and services  — ”you’ll be glad to know that the people who invented civilization were actually accountants,” Rumsey said. Their tablets embraced propaganda, poetry and proficiency, she said, which are also embraced by modern technology.

“The Sumerians invented the single most durable form of cordon technology,” she said. “This tablet is 2,300 years old. It survives fires, among all other forms. It’s made of clay, so it gets stronger once fired. You do not want to drop it, and it is not very portable, and it does not have a lot information on it. All technology since then have become more fragile, have held more information and have been harder to actually preserve.”

But are these technologies advantageous, Rumsey asked, quoting technology-curmudgeon Plato, who questioned the morality of memory through the guise of Socrates:

“For this invention will produce forgetfulness in the minds of those who learn to use it, because they will not practice their memory. Their trust in writing, produced by external characters which are no part of themselves, will discourage the use of their own memory within them. You have invented an elixir not of memory, but of reminding; and you offer your pupils the appearance of wisdom, not true wisdom, for they will read many things without instruction and will therefore seem to know many things, when they are for the most part ignorant and hard to get along with, since they are not wise, but only appear wise.”

Rumsey said Socrates — the ironist who knew Plato was writing down everything he said — was wrong in his assumption, as societies that adopted writing flourished. However, she agrees technologies have no morality and that without humans, technology would have no power.

Modern technology’s power is gross, with too much information trapped in digital technology. But this “data deluge” did not amass from the onset of the computer, but rather with the ability to record sounds and images — technology that produced more fragile material to be preserved, she said.

But who decides what is worthy of preservation? Rumsey said it’s the collectors, avid collectors like Thomas Jefferson. Jefferson preserved literature and scientific works that reflected “who Americans are.” His books eventually joined the national collection after the burning of the Capitol Building by British soldiers, when he sold his books to the Library of Congress.

“What this library represents is a commitment across generations of citizens who every other year vote in representatives and senators to fund the Library of Congress and make this access publicly available,” she said. “… So stewardship is a multigenerational commitment. We have to do our part when we are alive and take faith that people coming after us will take care of our legacy.”

Stewardship is also a commitment to preserving an uncorrupted collective memory because it shapes the future.

Rumsey referenced her graduate experience researching 17th-century Russia in 1980s Soviet Union. While in Russia, she was unable to retrieve documents or records from the 1600s, as they “did not exist.” When she discussed this with her friends, they said: “The future is certain; it’s the past that is always changing.”

An example of the Soviet Union’s erasure and doctoring of the past comes in two photos Rumsey displayed on the screen. On the left, a photo of Joseph Stalin with Soviet secret policeman Nikolai Yezhov, who presided over the Great Purge. On the right, the same photo without Nikolai Yezhov, who was virtually erased from Russian history after he fell out of favor, succumbing to the Great Purge himself.

“When you are actually telling a story where you want everyone to know what the outcome is, you actually have to rearrange the past to get the outcomes that you want,” Rumsey said. “Some nations are very good at this, and we like to think in America that we are not this kind of people, but I will tell you we all know that it is in fact possible to … get into the historical record and manipulate it.”

She referenced the 2016 presidential election and the manipulation of facts, sensationalized “fake news” and the current climate surrounding Confederate monuments and symbols in the South. Rumsey called for resilience.

“First, we have to get over ourselves,” she said. “There is something about this country; we have this secular culture that believes time is always moving forward. … The current culture in the U.S. is that the future is coming at us so fast the past couldn’t possibly matter anymore, so who cares? Why does it matter to anybody? But the notion (that) the future, let alone the present, could ever supersede the past is biologically impossible. … The past is more important than ever. The faster we move forward, the more important it is that we have a strong, open access to the past.”

Resilience involves taking responsibility for data, “backing it up” — on the cloud or elsewhere — to pass onto the next generation. Rumsey quoted poet Czesław Miłosz:

“I imagine the earth when I am no more. Nothing happens, no loss, it’s still a strange pageant. Women’s dresses, dewy lilacs, a song in the valley. Yet the books will be there on the shelves, well born, derived from people, but also from radiance, heights.”

She closed with a charge for the audience.

“I hope you take away this idea that, in the digital realm, we can also do something to take away our own radiance and heights through this new technology if we apply ourselves and our moral sense to how to use this technology, which is much more powerful than we anticipated when it was first invented,” Rumsey said. “It is up to us all.”

After the conclusion of Rumsey’s lecture, Institution Chief of Staff Matt Ewalt opened the Q-and-A by asking if there are dangers to revisiting nostalgia and reliving the past digitally.

“I think nostalgia is an emotional problem,” Rumsey said. “… I think the questions of being trapped inside of nostalgia is not a technological question; it has to do with what a person wants.”

She did acknowledge that being “trapped” in a digital world is dangerous, as it can be addicting.

Ewalt then turned to the audience for the final question; one attendee asked if the distinction between past, present and future was an illusion.

“If we think about what people are going to know about us — what’s going to be important in a hundred years — we have to say with humility, ‘We have no idea,’ ” Rumsey said. “The only thing we can do is record what matters to us.”