On the screen and in the Amphitheater, Ken Burns — augmented with clips of his works — discussed storytelling, collaboration and process at Mon., Aug. 20’s 10:45 a.m. morning lecture.

An acclaimed producer, director and filmmaker, Burns’ array of work has garnered 15 Emmy Awards and two Oscar nominations. He was honored with a Lifetime Achievement Award by the Academy of Television Arts & Sciences at the 2008 News & Documentary Emmy Awards. Burns’ work includes “The Civil War,” “Baseball,” “Jazz” and “The Vietnam War,” a PBS documentary series co-directed by Burns and written by Ward.

Ward has collaborated with Burns since 1984; he has been the sole or principal scriptwriter for almost 20 films. He is an award-winning author whose books include Pulitzer Prize finalist A First-Class Temperament: The Emergence of Franklin Roosevelt. Ward also wrote and co-wrote companion volumes for eight of Burns’ documentary series. Prior to his work in documentary films, Ward served as editor of American Heritage.

Duncan has also written several companion books to Burns’ films, in addition to writing and producing the PBS television series “Lewis & Clark: The Journey of the Corps of Discovery,” “Mark Twain,” and “The National Parks: America’s Best Idea,” which won him two Emmy Awards; he has served as a consultant or consulting producer on all of Burns’ other documentaries, beginning with “The Civil War.”

Hill opened the conversation by touching on the “storytelling” portion of the week’s theme, asking why words are essential to documentaries, especially when people are consumed by visuals.

“As I don’t need to tell anyone at Chautauqua, in the beginning (was) the word,” Burns said.

Films begin as words, he said — as an exploration of the power of words and literature, which then become a layer of documentary storytelling, alongside imagery and music. Burns stressed the importance of storytelling, and paraphrased Richard Powers: “The best ideas in the world will not change a single mind. The only thing that can do that is a good story.”

The problem, Burns said, is people have forgotten how to tell stories; documentarians fill that gap by voicing authentic, complex stories, equipped with nuances and subtext — a feat which Ward and Duncan have executed in each of their films, Burns said.

“That honor of the written word and the spoken word is what keeps me going,” Duncan said.

But the editing process leaves prose on the cutting room floor, Ward said. Often the turn of phrase a writer spends a day artfully crafting — with a beautiful beginning and a perfect ending — doesn’t make the final cut, and the final cut ends up being better than anticipated.

With that, Hill turned to a subject the three men know intimately: Mark Twain. Hill paraphrased Ernest Hemingway, who said all of American literature began with Mark Twain’s Adventures of Huckleberry Finn. Hill proceeded to ask, “Why?”

Burns said Twain wrote as if he invented literature, paraphrasing Twain: “the difference between the right word and almost the right word is the difference between lightning and the lightning bug.” Twain’s masterful prose was captured in Burns, Ward and Duncan’s film, “Mark Twain”; they shared a clip with Amp attendees that Burns described as “one of the most important scenes we have ever put together.”

“Mark Twain” is a biographical film about the public and private persona of Samuel Clemens, featuring narration by Keith David and voice performances by Kevin Conway. The film was released in 2001 and aired on PBS in 2002. Ward and Duncan co-wrote the script.

The clip closed with the poignant line from the moral climax of Huckleberry Finn, with the shift of Finn’s perspective on slavery and society’s hypocritical, cruel principles. He rips up a letter to Jim’s slave owner, declaring he’d rather be damned than defy his gut instinct; “I’ll go to hell,” he said. With that, the clip ended.

“The great tease of our conversation,” Hill said. “You just want to keep (watching).”

Hill asked how the process of telling a historical narrative — like that of Mark Twain — begins.

“We cast our net as wide as we can,” Burns said. “We want as many stories, as many sources, as much an expertise to bear the story and triangulate it in so many ways. … This distillation process is the whittling down to what the story seems to need to want.”

In the context of “Mark Twain,” Duncan said they tried to let Twain’s voice seep into the documentary. For a literary giant that isn’t too difficult — “He did pretty good,” Duncan said.

“I think that we have this innate tension, which is how to communicate … the biographical details … but also feel that we have room to play with the appreciation of their work and to let the work just speak for itself,” Burns said.

That is not an easy balance, he said. Too often, stories tilt the scales toward an antiseptic appreciation or to a scandalous, dramatized peep-show, but Burns tries to marry the two sides: the complex personal life and the equally complex public life.

Hill then asked how texts translate into film. Burns’ work frequently features frames of newspapers or live images of documents, like in PBS’s “The Vietnam War.”

“Part of it is trying to understand the power — the graphic power of words. … Another element is the sheer force of words,” Burns said. “I need only say to you, ‘We the people’ or ‘John Hancock’ for you to know that there is a graphic intensity to just simple words, … yet every one of you in this room has an image and an emotion attached to those words. So our job … (is) trying to appreciate what cold type on a page means.”

He turned to a scene from an episode of “The Vietnam War” about “the document drop of stolen, classified material into the public sphere that is destabilizing the political conversation — so deep in the past,” he said facetiously, followed by laughter and murmurs from the audience. Burns then played a clip from the 18-hour, 10-part series.

Like the 1970s — which are routinely encapsulated by President Richard Nixon’s administration, as well as the Vietnam War — decades are boiled down to the presidents and wars, Hill said, but Burns’ and Duncan’s forthcoming documentary switches gears, focusing on pop culture, specifically the undercurrent of country music in America.

Burns offered the Amp an exclusive look at a rough cut of his upcoming documentary on the genre, scheduled to be released in 2019; the footage was etched with watermarks and time stamps.

Although the film is set to be a broad, overarching history of the “uniquely American art form,” the clip played for the Amp chronicled the work of Kris Kristofferson. Kristofferson is a singer-songwriter who wrote and recorded songs like “Help Me Make It Through the Night” and “Sunday Mornin’ Comin’ Down,” which became a No. 1 hit for Johnny Cash.

Kristofferson’s songs accompany photographs and 101 interviews recorded for the film. Music is a critical aspect of the collaboration between editors and writers, Duncan said. The music guides the story, provides emotional context clues, and flows clips together.

Coming full circle, Hill asked for the panelists to reflect on the “influence and civil discourse” portion of the week’s theme.

“We are subscribers to something bigger: the idea that the past may be the greatest teacher we have, that we … find ourselves between the two-letter, plural pronoun ‘us’ and its enlarged, capitalized ‘U.S.,’ ” Burns said. “That’s where we find ourselves. … We are always looking not to speak, as so many documentaries are, to the political congregation that has the most interest, but to everyone. That’s our audience — everyone.”

When inclusivity is achieved, he said, that is when civil discourse is possible.

After the conclusion of the conversation, Hill changed hats from conversation moderator to Q-and-A moderator. He asked what was next for the filmmakers.

Burns is booked until 2029. He listed his projects: films about country music, the Mayo Clinic, the East Lake Meadows housing project in Atlanta, the prison system called “college behind bars,” President Lyndon Johnson and the civil rights movement, Reconstruction, the United States and the Holocaust, and the American Revolution, as well as biographies on Ernest Hemingway, Benjamin Franklin and Muhammad Ali. Burns’ filmmaking collective has also embarked on its first non-American topic: Leonardo da Vinci. 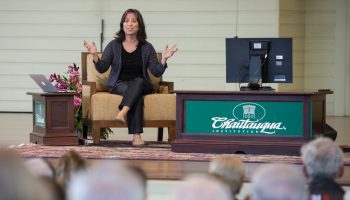 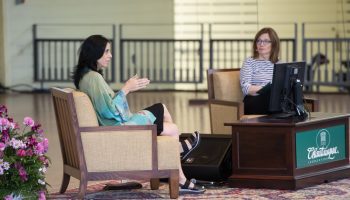 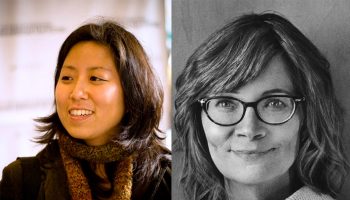 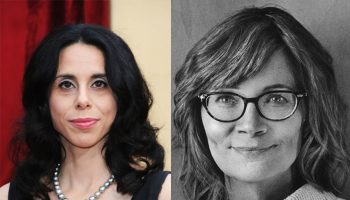 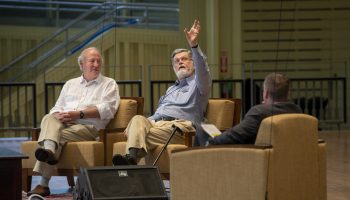