A quiet intensity hovered over Sharpe Field, and spectators could feel the importance of the women’s softball championship game.

Thursday’s, August 2, game was between the Hot Chauts and the Grilled Cheeselers. For the third year in a row, the two teams faced off in the championship game.

“After three years, it’s a rivalry, I guess,” said Julia Koron, Grilled Cheeselers team captain. “The games always come down to the end, and that’s what makes it so interesting and fun to play against them.”

This year’s game finished with a thrill, a winning run on third. The Hot Chauts got a walkoff single from second basewoman Brittany Johnson to bring in the winning run and win the game 13-12.

However, the game throughout was more like a roller coaster with ups and downs.

With the strictest umpire, Bill Bates, calling the game, the Grilled Cheeselers couldn’t blast music like usual; it may have impacted the game.

The Grilled Cheeselers were up to bat first and got the bases loaded for Koron to clean up. She did just that and scored all three runners, but ended up stranded on second base. The team went 3-0 going into the bottom of the first inning. The Hot Chauts answered back, loading their own bases, and got a triple to tie the score at 3-3 going into the top of the second inning.

For the next two innings, neither team could get a runner home. At the top of the fourth inning, the Grilled Cheeselers couldn’t get a single runner on base. The Hot Chauts ended the drought and finally got two runs to score going into the top of the fifth inning, leading with a score of 5-3.

Needing to answer back, the Grilled Cheeselers loaded the bases but only ended up scoring one and missed an opportunity to take the lead. The Hot Chauts got another big triple with bases loaded and ended up scoring four runs in the bottom of the fifth inning to stretch the lead to 9-4 going into the sixth inning.

Down by five and needing a rally, the Grilled Cheeselers loaded the bases once again and got a huge in-the-park homerun, which brought them back in the game. The crowd, and the Cheeselers’ dugout, went wild. The team scored five runs and tied the game at 9-9 heading into the bottom of the sixth inning. The Hot Chauts scored one run and took the lead 10-9.

At the top of the seventh inning, the Grilled Cheeselers needed one run to tie the score. With two quick outs and the bases loaded, they hit a single and tied the score 10-10. With the bases still loaded, the Cheeselers had two more singles to go and took the lead 12-10 going into the last inning of the championship game.

The Hot Chauts were down two runs, and the team started rattling off singles to runners on base. They tied the score 12-12 with one out and Jordan Spielman — the winning runner — on third. Brittany Johnson stepped to the plate with one out and hit a single down the middle to win the championship.

“It was great; we worked hard for this,” said Jen Tarr, Hot Chauts player. “I couldn’t be prouder. We just went out there and gave it our all. We did it. We came together.”

Tarr said the team is “absolutely” returning to defend its title.

The Grilled Cheeselers will be ready for next year’s match as well.

“I’m excited to keep playing them, and hopefully next year we beat them,” Koron said.

Carry Zachry, women’s league commissioner, called it “one of the best games I can remember.” 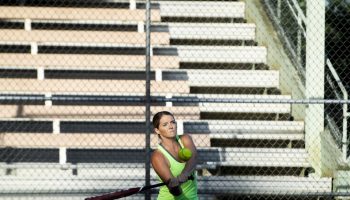 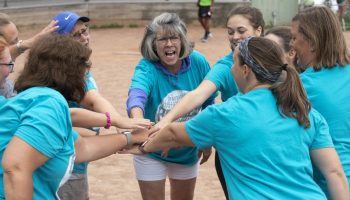 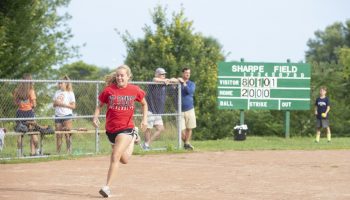 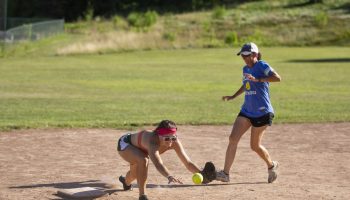