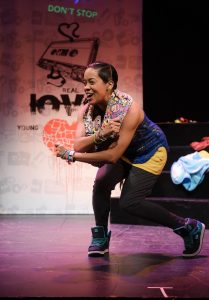 In a time of Snapchat filters and social media scrutiny, inspiring self-confidence in children isn’t always an easy task. But that’s exactly what artist and director Paige Hernandez has been doing since 2008, with her original show “Havana Hop: A Children’s Tale of Culture and Confidence.”

“Havana Hop” comes to the Chautauqua stage at 5 and 7 p.m. tonight, July 30, in Smith Wilkes Hall, as part of the Institution’s Family Entertainment Series.

Taking the stage solo, Hernandez takes on the personas of three generations of women. The story follows a young girl named Yelia as she musters up the courage to attend an audition for a chance to dance at the White House, only to be told she isn’t unique enough to make the cut.

Yelia turns to her mother for inspiration, and in turn, her mother decides to help Yelia connect with her cultural roots, via a trip to visit her grandmother in Cuba.

According to Hernandez, the show was inspired by her own experiences growing up. Her father is partially of Cuban descent, and Hernandez said that living in the United States and not being able to connect with her heritage in Cuba was something she struggled with.

The show was commissioned in 2008, as part of First Lady Michelle Obama’s “Let’s Move” initiative and inspired by President Barack Obama’s message of hope and change.

Now, Hernandez is using “Havana Hop” as a way to encourage young audiences to embrace their cultural heritage and to help them find more confidence in who they are. Hernandez said through art, children can discover how to be themselves.

“Arts are the best way for them to express themselves,” Hernandez said in a 2017 interview with The Huffington Post. “I can sing a song and do a dance and all they have to do is clap their hands and tap their feet. They feel so accomplished. It empowers them.”

Hernandez’s performance is highly interactive. The show features a number of call-and-response segments, and the children in the audience are encouraged to sing along and engage with the show as much as possible.

By connecting with her young audience, Hernandez said she hopes to leave them with an understanding that if they believe in themselves and embrace who they are, they’ll be rewarded many times over.

“I want all of the audience to walk away knowing that identifying who you are and what makes you unique, even if that means digging within your own family background and culture, can really help you feel grounded and find your ultimate confidence,” Hernandez said.

Hernandez said being able to provide that message of confidence and empowerment is something incredible. But she also said that her relationship with her young audience isn’t just a one-way street.

“Performing for children is really great,” Hernandez said. “What the children who are watching me might not know is that they inspire me as much as I hope I inspire them.”