Sporting flared pants and oversized glasses, the young woman in the photo stands in front of a sign that reads “Welcome to Chautauqua.” Her parents, aunt, uncle and two small cousins — one wears a red shirt featuring Miller Bell Tower — gather around her. The young woman in the center with the thick, clear frames is Jimin Han, and the 1983 snapshot captures “one of many” family visits to Chautauqua Institution.

A panelist at last year’s Writers’ Festival, Han lived her adolescent and teenage years in Jamestown, New York, and spent time on the Institution grounds from ages 8 to 18. In sixth grade, she sang in the Chautauqua County Music Teachers Association’s annual Spring All-County Concert; her high school graduation was in the Amphitheater. After 20 years away, she traveled back to Chautauqua and met up with her English and history teachers, staying at the Athenaeum Hotel with her partner and two children.

This year, Han is Week Five’s prose writer-in-residence at the Chautauqua Writers’ Center. She spent the week leading the workshop, “Story, Plot, Structure: Telling the Difference and Telling It Well,” wherein she explored perspective and form, a potentially abundant relationship manifest in Julian Barnes’ The Only Story, Marguerite Duras’ The War: A Memoir and her own work of segmented fiction, A Small Revolution. At 12:15 p.m. Friday, July 26 on the porch of the Literary Arts Center at Alumni Hall, she will give her Brown Bag lecture, “Going Home Again: Memory and the Fiction Writer.”

Given her long history with Chautauqua, Han admits that offering a craft talk on “Going Home” is “going to be really weird” — especially because she located the setting of her newest book in a fictional, Mayville-esque blue-collar town on the shores of Chautauqua Lake. But Han’s ties to the homes of her reality have long been entangled and made strange by forces beyond her control.

Raised by her grandmother until she was 4 years old, Han immigrated with her family from Seoul, South Korea, to the United States in 1970, leaving her grandmother behind. During her 10 years in Jamestown, she lived in five houses in various neighborhood, which taught her that “even within a town, you can have different experiences.”

As a young adult, she returned to the country of her birth and felt “uncomfortable” with her crowded living arrangements. A friend suggested that living for decades in the United States had “affected (her) sense of space.” Her inability to grasp her own unease, and seeing how her cousins living in the United States might not understand it either, inspired Han to write A Small Revolution.

“Part of writing was dealing with the places that haunt me,” Han said. “I think more about my childhood now than I have ever before. I’m interested in how places are frozen in time for me and how there are so many stories about characters going home — how we fight over a sense of place.”

In a July 14 tweet, President Donald Trump suggested that “ ‘Progressive’ Democratic Congresswomen … go back and help fix the totally broken and crime infested places from which they came.” Han cited this racist language, as well as the U.S.-Mexico border humanitarian crisis, as evidence of “an obsession with separating ourselves.” As an Asian American writer born in South Korea who now lives outside New York City, Han found herself feeling vulnerable to accusations that her home is “somewhere else.”

“It made the writing more urgent,” she said. “I’m constantly surprised by how much we are within our own points of view on (belonging). That’s why I believe place is so integral to character and story. I need to write to understand how I think about something.”

As a teacher at the Writing Institute at Sarah Lawrence College, Han has to schedule blocks of writing time “like a dentist’s appointment” or else she’s “really hard to be around.” Twitter scrolling is a prime enemy of productivity — Han emails herself articles from the app to read later in an attempt to avoid that particular pitfall — but she knows what “years of silence” sounds like, and she is motivated to be part of the literary conversation.

“Someone’s going to be part of that conversation,” she said. “I don’t like to say I am an Asian American writer, but there’s still so much shit in the world, so much racism. Not that I want to change people’s minds; I just want to fill them in with another story.”

Her current project — the book set near the Institution — investigates the modes in which patriarchy does or does not value women and draws from a lopsided mentor-mentee dynamic from Han’s own past. For her, there is power in writing fiction that mirrors a lived experience. At the same time, she gets nervous.

“The common refrain is that writers of color are often seen as writing from our lives even as we write fiction,” Han said. “It’s a gross assumption. What’s fun about fiction is (that) it’s playing and looking around and making up this world.”

Contemporary politics deflate her optimism, but Han remains a steadfast believer in the written word.

“I’ve been sort of conditioned to believe that if we can just say it in the right way, people will understand what they’re doing to each other, to these children in these cages,” she said. “It’s exciting when you can get through. There’s so much noise.” 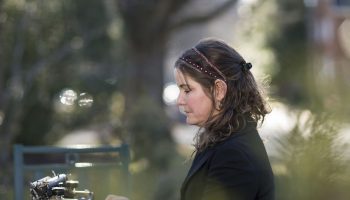 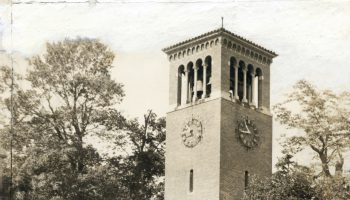