Ayers wears multiple hats this season for CTC. She appears onstage in The Christians as Elizabeth, wife of Pastor Paul and pillar in the community of his church. She is also directing CTC’s Bratton Late Night Cabaret toward the end of the season. Finally, she will be helping CTC Artistic Director Andrew Borba stage One Man, Two Guvnors and is excited to work on the show because of her love for farces.

For now, she’s working to bring Elizabeth to life in The Christians. She said her favorite part of the process was working to craft her character’s stage presence when she isn’t speaking.

“I’ve never been onstage for so long without lines,” Ayers said. “It’s given me a lot of time to get inside the mind of the character. It’s been a lot of fun to develop in that journey so that I can really think like Elizabeth and present myself wholly as my character.”

Where she’s from: Originally from Washington, D.C., she currently resides in Newark, New Jersey, because it’s cheaper than living in New York City, while still only being a 20-minute train ride away from the city.

“I feel like I struck gold living there,” Ayers said.

What she does outside of Chautauqua: She works as a year-round freelance artist. Ayers does theater, works in film and television, does voiceovers and directs plays.

“I spend my year going from gig to gig, city to city,” Ayers said. “I figured I might as well do it while I’m young.”

Until recently, she worked as executive assistant to playwright Dominique Morisseau. Ayers said the experience was valuable and enjoyable, but that she was ready to strike out on her own.

“While juggling my artistic career, I was also on her team, building hers,” Ayers said. “It got to the point where I just made the leap of faith and started to put all my energy into me. It was scary, but exciting.”

Instead of a single moment she remembers most fondly, Ayers said that any time she’s able to connect with her peers when working on a performance is an immensely rewarding experience.

“It’s always about the people for me,” Ayers said. “I’m a big fan of the cast of any show getting together and doing things. Usually, in regional theater, no one really knows the new city, so you are each other’s family. Going out and exploring together is always super fun.”

Ayers said that although bacon isn’t exactly a health food, there’s no denying that it’s delicious.

“It’s so bad, but I love it,” Ayers said. “I’ve loved it my entire life. I love it on everything; my salad, my burgers, everything — bacon makes everything better.”

After arriving at Chautauqua, Ayers started watching the series for a second time. She said she never fails to feel moved by the depth and realness of the characters.

“The story is so heartwarming, but at the same time, it deals with real issues in real ways, not the after-school special kind of treatment that a lot of stories about high schools fall into,” Ayers said.

Favorite music: At the moment, anything by the artist Lizzo.

Ayers said that aside from the upbeat, fun music that Lizzo makes, the fact that she confidently flaunts her abilities as a flutist is cool to see.

“I was in marching band growing up,” Ayers said. “I played the clarinet, and she’s making kids like us feel cool.”

Ayers said that although she doesn’t know much about the country, the beautiful photos and videos she’s seen of the beaches there are more than enough to convince her it’s worth visiting.

“I love the beach, and the Maldives is so gorgeous,” Ayers said. “It seems like the perfect place to go, relax and enjoy the beauty.” 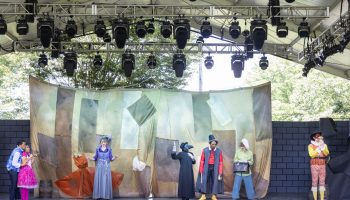