Chautauqua County is home to a wide variety of animals, some of which are incredibly rare.

Twan Leenders, president of the Roger Tory Peterson Institute of Natural History, will discuss some of these uncommon creatures that are hiding in plain sight at a Bird, Tree & Garden Club Lake Walk at 6:30 p.m. today at the lakeside porch of the Youth Activities Center near Heinz Beach.

“We’re so disconnected from understanding nature that we don’t even see what’s living in our backyards,” Leenders said.

But, if one knows what to look for, they might find spiny softshell turtles, birds like nighthawks and chimney swifts or one of the two surviving species of an ancient lineage of dragonflies called the gray petaltail.

Leenders, a conservation biologist, said he has found all of these and more in Chautauqua County. In his own Jamestown backyard, he has spotted 140 different species.

Some of the endangered species in the area can be found in places one might not expect.

For example, Leenders said downtown Jamestown has one of the highest populations of spiny softshell turtles in all of New York.

These creatures, one of the largest freshwater turtle species in North America, thrive making their homes in some buildings in Jamestown, where the average person might not expect to see them.

“People who don’t have that kind of background knowledge will see crumbling infrastructure,” Leenders said. “What they’re not seeing is the meaning of their presence, that the water is so clean they can survive here.”

Another animal that makes its home in the area is the Henslow’s sparrow, which has a breeding population at the Chautauqua County Jamestown Airport.

“If we still have such a rare species living here, it’s a matter of trying to figure out what we did right, so we can have a functional airport that is also a conservation area that protects some of the rarest birds in the state,” Leenders said. 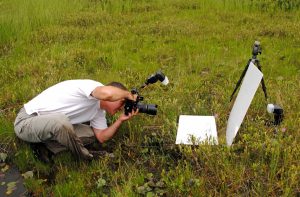 Nighthawks and chimney swifts also do well on manmade structures, Leenders said. They make their homes on the tops of buildings with gravel roofs — as these buildings crumble and are taken down, these birds lose habitat, which contributes to a decline in their numbers.

“In essence, he created the very first tool for anyone — people who weren’t scientists, who weren’t naturalists — to recognize bits of nature around them,” Leenders said.

Today, the Institute showcases Peterson’s artwork, and organizes conservation, education and research efforts in New York, Connecticut and Pennsylvania. It monitors many of the endangered species that Leenders will discuss at the Lake Walk.