Sarah Jacobs grew up surrounded by decoration. Her grandfather worked as a wallpaper hanger, and she remembers how he covered each of the four walls in his kitchen with a different patterned paper.

“It was really clashy and interesting,” she said. “Kind of like my paintings.”

Jacobs, a Pittsburgh-based artist and a professor at Carlow University, is one of eight contemporary artists featured in Chautauqua Visual Arts’ first exhibition of the season, “Wallpaper Diaries.”

Chautauquans on the grounds can visit the exhibition in person at the Strohl Art Center’s Main Gallery from 1 p.m. to 5 p.m., Tuesday through Saturday, until Aug. 25.

“Wallpaper Diaries” pays homage to the Pattern and Decoration Movement of the 1970s. The movement — also known as P&D— formed in opposition to the Modernist idea that art which used decoration and ornamentation was frivolous and superficial. The movement was inspired by work that many white male artists dismissed as domestic, applied arts: textiles, embroidery, wallpaper, mosaics and glassware.

“Pattern and Decoration pushed against the flagrant bias of white male artists who defined the conceptions of ‘good’ art through masculinity, sexism, and a belief in the superiority of the West over developing countries, stratifying fine art above decorative art,” Barie wrote in her curator’s statement.

Jacobs said she appreciates the movement’s lasting legacy in the art world.

“Prior to (P&D), people didn’t think of patterns or fabric work as being worthy of a fine art status,” she said. “It opened up the possibility of people using patterns in their work and being taken seriously.”

The four paintings Jacobs has on display are a part of her series “The Cave,” a project that explores the contrast of pattern and realism. Her paintings depict realistic flowers and plants emerging from and mingling with brightly colored textile- and wallpaper-inspired patterns, and in one case, actual patterned fabric.

“Visually, what patterns do is they tend to flatten the surface … so, I like to use patterns in my work because I pair them with (images) that look like they have a lot of volume,” Jacobs said. “I like this idea that they look real compared to the patterns, but they aren’t real, because actually, everything is flat. It’s kind of a nerdy game for me.”

Brooklyn-based artist Annette Davidek has been inspired by P&D for as long as she can remember.

“My uncle was a painter and did decorative work, so there must be some connection from way back,” she said. “I remember ‘70s wallpaper (and) just being drawn to that decorative aspect.”

She used to wonder if decorative, pattern-heavy work could be accepted as fine art.

“Of course it is,” Davidek said, “but I struggled with that for a bit.”

She has four oil paintings in the exhibition, abstract pieces inspired by botanical images. Davidek uses thin layers of glaze to create ghostly, translucent images that contrast with the opaque shapes in her pieces, creating the appearance of a depth of field.

“Someone once described the work as ‘otherworldly,’” she said. “That sway between flatness and the illusion of depth is important to me.”

Raymond Saá, a New Jersey-based artist, has three pieces in the exhibition. Although he trained in sculpture, his current projects draw inspiration from quilt making and textiles.

“All artists are looking for inspiration all over the place,” Saá said. “In addition to looking at other artists, I’m highly inspired by designers.”

He creates large, abstract paper collages by sewing together 50 to 60 postcard-sized rectangles of paper, each containing their own smaller collages of brightly colored abstract shapes. The idea to sew into paper came out of necessity one summer when Saá was working on a collage in his hometown of Miami.

“Whatever glue I was working with at the time was just not working with the humidity,” he said. “The paper was peeling off, (so) I just started sewing the paper together and it really turned into something for me.”

Lynne Meade is a California-based sculptor who specializes in creating pierced ceramic pieces. Her vessels resemble pots or vases, but are covered in patterned, lace-like holes, rendering them, in her words, “purely impractical.”

Meade creates her pieced patterns through a meticulous process, slowly enlarging the holes in the ceramic by hand.

“Focusing on this repetitive thing relieves my anxiety and stress,” she said. “It’s almost like a mantra.”

While her vessels may look rather delicate, Meade said that they are in fact, deceptively strong.

“The first thing I did when I got my first (pierced) table out of the kiln was stand on it,” she said. “They’re tough.” 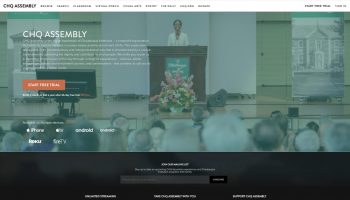