The Rev. Janet Broderick had only been in her new parish, All Saints’ Epicopal Church in Beverly Hill, for about eight months when she went to a conference in Kentucky in February. She and at least seven other clergy brought COVID-19 home with them.

“There was incredible trauma in the parish. Suddenly the parish lost its new rector,” she said. “I was in ICU for two weeks. Luckily, no one in the parish was infected by me.”

Broderick will be the chaplain for Week Five of the 2020 CHQ Assembly. She will preach at the 10:45 a.m. EDT Sunday, July 26, service of worship and sermon on the CHQ Assembly Video Platform. The title of Sunday’s sermon is “The Iconoclast.”

She will also give a homily at the 9:15 a.m. morning devotionals from Monday, July 27, to Friday, July 31. Her topics include: “Pottery,” “Story of the Boxes,” Masks,” “Purification before Action,” and “Staying Steady.”

For each homily, she has chosen a quote from a female comedian, including Lily Tomlin, Whoopi Goldberg, Lucille Ball, Arlene Feynman and Paula Poundstone.

“Each quote is a response to what I am doing in the sermon,” Broderick said. “These comedians provide brilliant reflections on the culture and what comes in the sermon. Besides, I love to laugh and Maureen (Rovegno, Chautauqua’s director of religion) told me to be entertaining.”

Broderick has never been to Chautauqua, but she has heard all about it from Joshua Stafford, Chautauqua’s interim organist. She was the rector of St. Peter’s Episcopal Church in Morristown, New Jersey, where Stafford is the organist and directs a choir school.

“I have heard all about Chautauqua and Jamestown — the home of Lucille Ball — and I am looking forward to being there in person someday,” she said.

The pandemic has given her church, All Saints’ in Beverly Hills, a chance to pause and reset a media ministry they had only been thinking about.

“We had a short film and a movie, but the virus pushed us to do some experimental worship films. Instead of filming a service with no one there, if we were talking about homelessness, we went to a tent community,” she said. “We also found that over Zoom, people felt more comfortable sharing prayers that they would not if they had stayed in the pews.”

However, it is hard to be so remote, she said: “Church is about people; you meet your sister or brother in worship.”

The pandemic has also given people a lot of time to reflect about society. “Families have participated in their children’s education,” Broderick said.  “I have noticed the incredible inequality in our society, especially for people who cannot care for themselves the way others can. The lack of access to medical care is blatantly clear.”

She continued, “It is a chance to be prophetic, to take a look at my own parish and see who we are in terms of racism and sexism. Grief leads to fear in the community.”

Broderick noted that the Biblical community in exile in Babylon longed for Jerusalem. Then they realized all they could accomplish as religious people without the Temple. “The gates of heaven are open to those who pray and the exile led to the synagogue movement,” she said.

How to support home churches is one of the ideas she has been thinking about. “We can have church in homes, on hikes. A lot of people have not had an area set up in their home where they pray and listen for God,” she said. “Then there is the possibility that we will have a vaccine by January and we will be back in church to hug and kiss each other.”

Broderick’s ministry spans more than three decades, and she has served as curate, vicar and rector in both rural and urban settings, rich and poor, large and small, progressive and traditional. Prior to All Saints’, Broderick served as rector of St. Peter’s in Morristown, New Jersey, leading outreach to Latino and immigrant populations, rigorous education initiatives and responsive work for justice.

Previously, Broderick was rector at Grace Van Vorst in Jersey City, a curate at The Church of the Epiphany in New York City, and a seminarian at St. James Church; her first rectorship was for a small parish in Westchester, New York. A graduate of the University of Michigan, she is an active community organizer and the founder of Refugee Assistance Morris Partners and Afterschool on South.

This program is made possible by the Gladys R. Brasted and Adair Brasted Gould Memorial Chaplaincy. 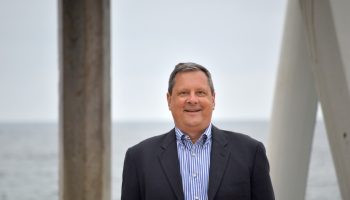