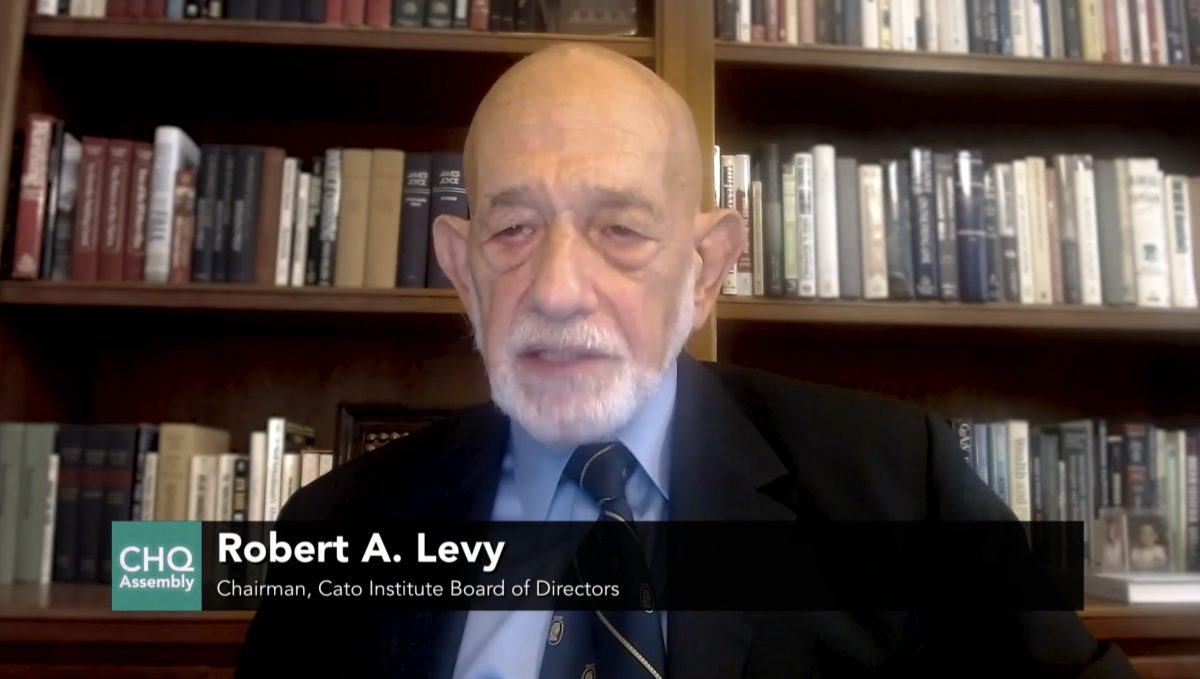 Libertarianism is a philosophy centered on protecting private property, free markets and individual liberties. Robert Levy, chairman of the board of directors at the Cato Institute, said that libertarians tend to agree with conservatives regarding fiscal issues, and agree with liberals on social issues.

Levy said that many conservatives, as opposed to libertarians, are willing to assign the federal government more responsibility, such as with hurricane relief, retirement systems and medical care.

“Take a look at the totally effective-less war on drugs. If you look through the Constitution, you will find very few crimes mentioned: counterfeiting, treason and piracy,” Levy said. “Criminal law is typically left up to state and local governments, and yet conservatives believe because of the drug war … we can ignore that there’s no Constitutional authorization.”

At 10:45 a.m. EDT Wednesday, Aug. 19, 2020, on the CHQ Assembly Video Platform, Levy discussed how libertarians agree and disagree with liberals and conservatives on the role of the federal government, and the powers the people and the Constitution gave the federal government, as part of the Chautauqua Lecture Series Week Eight theme of “Reframing the Constitution.” His lecture was titled “The Founding Fathers’ Vision.”

“When the same Congress delegates to the Environmental Protection Agency power to enact regulations, with no more guidance than to keep us safe from pollutants, the left applauds enthusiastically,” Levy said. “Now, could it be the pollutants are a greater threat than terrorists, or is it more likely that the left has this selective indignation about the role of government, reflecting an inconsistency in liberal mindset, just as there is inconsistency in the conservative mindset?”

Levy said that when Thomas Jefferson drafted the Declaration of Independence, and wrote that all men are created equal, with unalienable rights, he also wrote that governments are instituted “to secure these rights.”

“Notice he said secure, not grant,” Levy said. “He said secure. We already had the rights.”

The Constitution, Levy said, is not “a code of conduct. Its purpose is to limit the power of government, and secure individual liberties. It is not the people or the citizens that are required to obey the Constitution.”

The lecture then shifted to a Q-and-A session with Chautauqua Institution Vice President and Emily and Richard Smucker Chair for Education Matt Ewalt. He asked Levy if federal legislation, like the Americans with Disabilities Act, oversteps the government’s responsibilities.

Levy said federal legislation is doing more than it should, and the ADA specifically should not be regulating as much when it comes to private parties. He said that private parties should be able to negotiate “whatever employment agreements the employer and the employee agreed to.”

“While I think that it was a bad idea, remains a bad idea (and I believe) that employment relationships should be up to the private parties involved,” Levy said, “I nonetheless recognize this isn’t on the horizon, and there’s no proposal with the Cato Institute or by any of the experts at the Cato Institute to abolish the ADA, or for that matter any of the other anti-discrimination laws.”

Ewalt asked how limited government, such as one libertarians support, can deal with large issues that the Founding Fathers never thought of, like climate change.

Levy said libertarians mostly agree that climate change exists and is partly manmade, but there are some disagreements on how detrimental global warming will be, and a vast disagreement over what actions the federal government should take.

“The new green proposals by the Democratic Party … some of those cures may be worse than the disease,” Levy said. “Libertarians do not deny that the federal government has a major role to play in climate change because climate problems could consist of some people engaging in activities that have injurious effects on other people, and government has a meaningful role to step in and stop that from occurring.”

Ewalt then asked how Americans should go about educating themselves about the Constitution.

Levy said that it is understandable for the public not to be well-versed in the Constitution; only a few years ago, Congress passed a bill requiring all members of Congress read the Constitution.

“In fact, it was read on the floor of Congress,” Levy said. “(For) some, I’m sure, that’s the first time they were exposed to the Constitution.”

He said everyone should be required to read and study the Constitution in school, and that there should be a much greater school choice.

“If you’re going to learn about government, the last thing in the world you want is for the government to be running the school system,” Levy said. “So far, I think privatized education is a heck of a good deal, if not exclusively, at least as a supplement to public education.”