The Rev. Mitri Raheb looks to future with hope in spite of Israel and Palestine’s present

At 58 years old, the Rev. Mitri Raheb has lived through 11 wars and battles in Bethlehem, Palestine.

“On average, every five years we go through a war,” Raheb said. “And in such a context, it’s really not easy to keep hope alive.”

But as an Evangelical Lutheran pastor, he preaches hope all the same.

“The more I read the Bible, the more I was preaching, the more I discovered that actually the Bible itself was written in a context of lots of despair, war, exile, destruction,” Raheb said. “And you hear the prophets saying, ‘How long, oh Lord, how long?’ And yet, that same book, the Bible, is infused with hope.

In his lecture “Palestine: Hope at Times of Despair?!” Raheb described how just like in the Bible, Palestine is in despair, but he still has hope for future peace.

He pre-recorded his lecture from Bethlehem, Palestine. It was released at 2 p.m. EDT Tuesday, Aug. 25, on the CHQ Assembly Video Platform as part of the Week Nine Interfaith Lecture Series theme, “The Future We Want, the World We Need.”

He started with the present. After Palestinians have been pushed out of their homes by Jewish settlers for the last 50 years, Raheb said Israel President Benjamin Netanyahu aims to annex around 40% of the West Bank, including important resources like the Jordan Valley “vegetable basket” and access to water resources like the Dead Sea and a water aquifer. He compared the annexation plan to Swiss cheese.

“Israel gets the cheese, that is, the resources, and the Palestinians are pushed out and get the holes,” Raheb said.

The current U.S. administration is also partial to Israel’s goals.

“They give Israel everything without really leaving any options for the Palestinians,” Raheb said.

U.S. President Donald Trump’s plan, illustrated in a map, leaves parts of Gaza disconnected from one another, with limited roads to travel between them.

Raheb has been discouraged by the international state response in general. Raheb said the atrocities Jews suffered in the Holocaust often cause European states to hesitate to act on what the Israeli government has done to Palestinians in the name of a holy land.

Meanwhile, Arab states like the United Arab Emirates gain financially and politically through ties with Israel at the expense of Palestine. The Palestinian poet Mahmoud Darwish uses the Judeo-Christian allegory of the 11 brothers abusing Joseph and casting him out in the Old Testament to summarize the the waning lack of support over time from traditionally Muslim countries, though Palestine, too, is traditionally Muslim.

“We live in this limbo,” Raheb said.

Raheb also uses another word to describe this limbo — apartheid.

“There is no way to violate human rights in the name of divine rights,” Raheb said.

Since 2002, Israel has built a separation barrier deep into Palestinian territory that has been condemned by the international community. Qalqilya, Palestine, is a city with 50,000 people surrounded by a 25-foot wall. To travel from Bethlehem to Jerusalem, five miles away in Israel, Palestinians need a permit. Israel has also created separate road systems that Israelis are permitted to use, while Palestinians are restricted to smaller roads.

When looking at maps, Raheb said it’s hard to be hopeful. But people still inspire hope in him.

He is first comforted by the fact that 6.5 million Palestinians live between the Mediterranean Sea and the Jordan Valley. They are not going to just disappear. In 1948, outside forces tried to do this by kicking Palestinians out of their homes and displacing them.

He is also comforted by the 6 million-strong diaspora of Palestinians around the world. His conversations with Palestinians abroad who are young, educated and still passionate about Palestine  — even as second- or third-generation immigrants — are another source of hope.

Raheb said that young Jewish people also give him hope for Palestine’s future.

“J Street said we have to work for a two-state solution. We have to find a compromise,” Raheb said. “Not because they love the Palestinians so much, but because Israel cannot be a democratic country and a Jewish country at the same time.”

Raheb said that he also still sees hope in the international community. Like this summer, when Black Lives Matter protests spread globally following the death of George Floyd. And when Trump moved the U.S. Embassy to Jerusalem, Israel, the international community did not follow suit because Raheb said it recognized Jerusalem not as the capital of Israel, but as an occupied state. And churches in the United States and all over the world are calling for companies to divest from business with Israel in protest.

“It is a desperate situation, but there is still hope,” Raheb said.

The future of Palestine, Raheb said, needs the international community to take human rights violations in Palestine seriously, engaged citizens who pay attention, and to regain the diversity that Palestine had prior to British colonization. Until 1928, Christians, Jews and Muslims worked and lived in one municipality before the British divided it  into two separate societies. In 1947, British soldiers did the same with a leper hospital and divided them into Jews and Muslims.

Raheb said that without a state, Palestine doesn’t have access to the rest of the world (though being a state doesn’t cut a nation off from everything in a post-nation-state era). After Palestine has been treated as stateless for generations, Raheb said that a confederation of two states rather than a two-state solution could be an option for peace. And regional cooperation on transnational issues beyond Palestine and Israel — like the COVID-19 pandemic — are also priorities.

But to be able to prioritize these concerns, Raheb said the hundreds of billions of dollars of military funding need to be distributed back into investments for the people. He is concerned about growing religious nationalism worldwide; in Christian Zionist movements and links to general populism.

“When you blend religion with nationalism, this is a very explosive mix,” Raheb said.

To look toward the future of Palestine and the world with hope, Raheb said, reminded him of the prophet Jeremiah from the sixth century B.C.E., who watched Jerusalem fall while he was still imprisoned. He asked a family member to buy him a piece of land in Jerusalem after the tragedy.

“This is exactly what we do,” Raheb said. “We are investing in Palestine regardless of the weather, if it’s good or bad, if we have peaceful times, or even during wars; we were busy building the future.”

Raheb is the president of Dar al-Kalima University College of Arts and Culture in Bethlehem, Palestine, and co-founder of the U.S. nonprofit Bright Stars of Bethlehem, which funds the university educational and cultural initiatives. During the last five months of the COVID-19 pandemic while everything else shut down, the university finished building an outdoor plaza for students, and a new art gallery for the university art collection — and also started a new training center in Gaza, which suffers from polluted air, water and a lack opportunities for young people due to Israeli state violence.

“The only option we have, actually, is to get ready to work and invest even when no one wants to invest,” Raheb said. 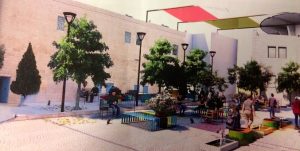