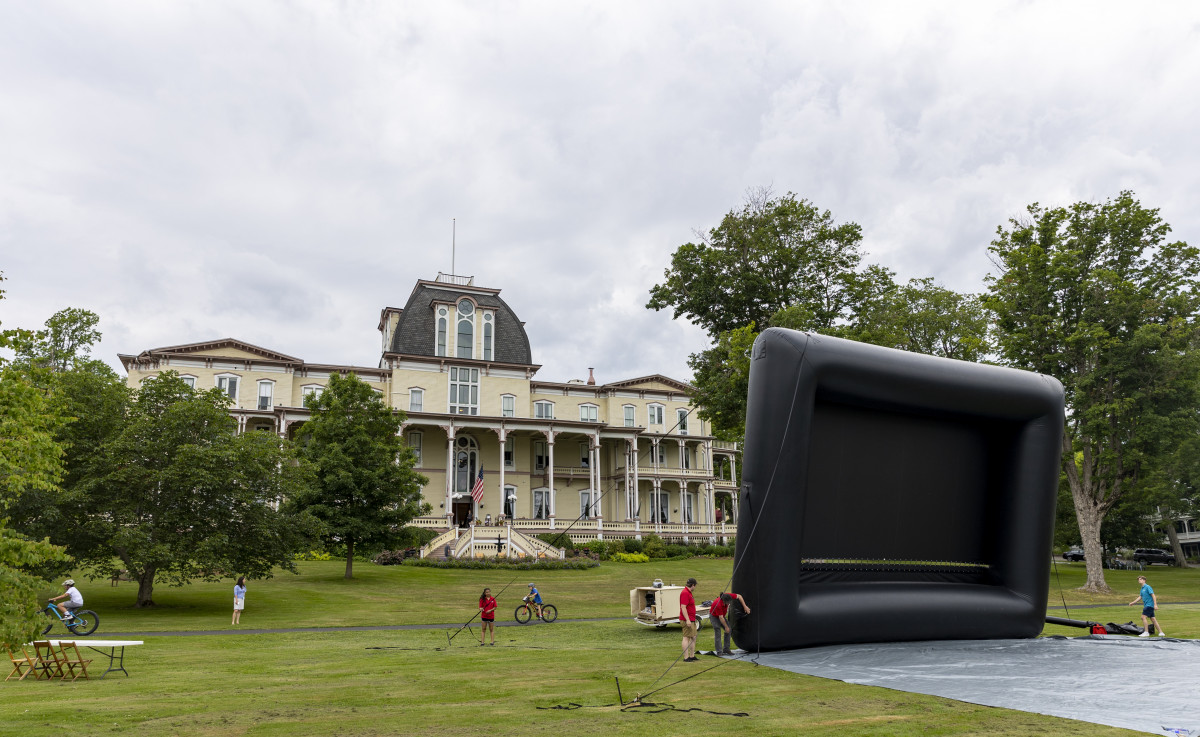 Movies at Chautauqua have long been a staple of the summer season, from the daily operations of the Chautauqua Cinema to more recent programs showcasing movies in the Amphitheater alongside the Chautauqua Symphony Orchestra. Even Bestor Plaza has transformed into a movie theater of sorts on occasion over the past few years, with movies like “Inside Out” and “Star Wars: The Force Awakens” drawing families and their picnic blankets to the fountain.

This summer, a new experimental initiative expands on the Institution’s movie offerings, with Cinema Under the Stars. The movie series premieres at approximately 9:45 p.m. (depending on the arrival of dusk) Saturday night on the Athenaeum Hotel lawn, weather permitting. The movies every week — except for the beginning of Weeks Four and Five — will rotate between Sharpe Field, Bestor Plaza and the Athenaeum lawn.

Chautauquans got a sneak peek of the giant movie screen late Friday night, with the screening of the 2008 movie musical “Mamma Mia!” When developing the lineup of movies for the new program, Chautauqua Institution Manager of Strategic Initiatives Sam Nelson had a clear vision in mind.

“We wanted to choose movies that engaged the community in civil dialogue throughout the experience,” Nelson said. “By expanding movies outside on our 30-foot screen, we hope to create a sense of community and normalcy, while also building upon Chautauqua’s themed weeks by developing a lineup of fan favorites such as ‘Mamma Mia!,’ ‘Monsters, Inc.,’ and of course, ‘Gravity.’ ”

Nelson said he aspires for this cinematic experience to create a sense of familiarity, as watching movies in a group setting has been highly anticipated following the COVID-19 pandemic. Chautauqua Cinema has also once again opened its doors and will this summer screen feature, independent and artistic films every day. The Cinema’s owner, Billy Schmidt, is serving as adviser to the Under the Stars presentations as part of the first phase of integrating the Institution’s and Cinema’s operations.

For Cinema Under the Stars, Chautauquans can reserve a porch table at the Heirloom Restaurant or bring personal blankets and lawn chairs. People are also encouraged to bring along earbuds and a personal FM radio, as sound will be transmitted via FM radio signal, although they will be available on-site for a nominal fee.