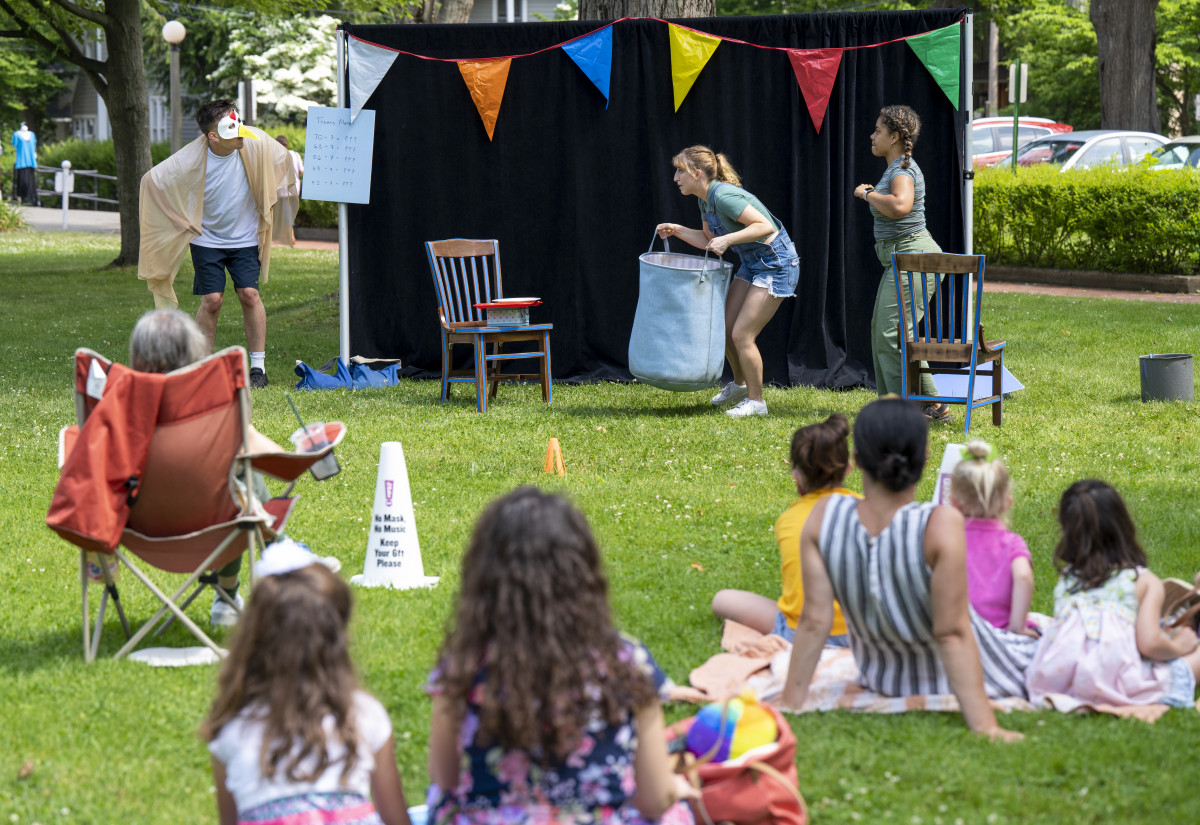 Chautauqua’s sixth annual Young Playwrights Project looked a little different this year. While another cohort of students still got the opportunity to have their scripts produced by the Chautauqua Theater Company, for the second year the actual performances of the plays were streamed online June 4 on the CHQ Assembly Platform because of COVID-19 risks. But with regulations loosening, many still were able to experience their work live and in-person.

The Institution’s Young Playwright Program was created in 2014 and is a three-phase playwriting program for third- and fourth-graders in the area.

The first phase of the program involves students watching videos teaching them to write a play and collaborating with the Institution’s Arts Education teaching artists. The sessions encourage the students to develop their imagination and their voice as a writer. In the second phase, a team of volunteers meet with third-grade classes to act out their plays. They also find out which scripts are selected to be produced by CTC. The third phase involves CTC productions, and for the past two years, the film festival.

To produce the plays remotely, CTC got creative in bringing the scripts to life, using green screens and Snapchat filters alongside traditional costumes.

Over 200 young playwrights submitted their plays to be produced by CTC for the 2020-21 academic year.

The program continued to evolve as the YPP partnered up with NYPopsUp and Syracuse Stage to bring six plays by third and fourth graders from the last seven years of the program to life June 12 on Bestor Plaza. The four performers featured were students from Syracuse University’s drama department: Zach Pear-son, Emily Edwards, Bran-don Richards and Summer Ainsworth, and the show was again this year directed by Katie McGerr.

The June 12 show opened with remarks from Institution President Michael E. Hill, welcoming Chautauquans back to Bestor Plaza and highlighting the importance of the Arts Education program at the Institution.

“It is really some of the most impactful work we do,” Hill said at the event. “It’s also the first expression of what Chautauqua is working on, which is to have our presence felt year-round.”

The six plays featured in the show were The Pollution Problem by Emma Johnson of Carlyle C. Ring Elementary School; The Boy Who Wanted a Hoop by Giovannie Jackson of M.J. Fletcher Elementary; It’s Snowing Cats and Dogs! by Surainati Rivera of Westfield Academy and Central School; Muscle-head Marty and Toughguy Tom Learn How To Be Nice by Austin Belin of Samuel G. Love Elementary; The Food That’s Alive by Annie Becker of Panama Central School; and Suki and His Friends by Madison Rosage of Chautauqua Lake Central School.

While some plays dealt with social issues like pollution, other plays were care-free and imaginative, like in The Food That’s Alive which chronicles a gross school lunch coming to life.

Madison Rosage and Annie Becker got to see their plays Suki and His Friends and The Food That’s Alive, respectively, performed live on Bestor Plaza, sitting front and center.

In her interview portion of the Young Playwrights Project 2021 Film Festival, Rosage explained that the characters were based on her stuffed animals and chose Batty to be the scared character for a reason.

“I wanted to make a character that was scared,” Rosage said. “And since (Batty) was the smallest animal out of the four (characters), I wanted young people to think that even if they are scared all the time, they could still be the hero.”