Toni Morrison said in her lecture “Unspeakable Things Unspoken” that “we have always been imagining ourselves.”

“Personal Geographies,” the theme for the 2021 Chautauqua Writers’ Festival, directed by Lillian-Yvonne Bertram, echoed that idea of how we imagine ourselves and how that can alter the world around us. The festival, which ran virtually from last Wednesday through Saturday, included workshops, panels readings from faculty members Jess Row, Martha Collins, Porochista Khakpour and Marcelo Hernandez-Castillo, and a keynote on Thursday from DaMaris B. Hill.

Hill is the author of A Bound Woman Is a Dangerous Thing, an Amazon No. 1 best seller in African-American poetry and a Publishers Weekly top 10 history title. Her other books include The Fluid Boundaries of Suffrage and Jim Crow: Staking Claims in the American Heartland. Her work has appeared in African American Review, ESPNW, Sou’wester, Sleet Magazine, American Studies Journal, Meridians, Shadowbox, Tidal Basin Review, Reverie, Tongues of the Ocean, and numerous anthologies.

Evoking Morrison’s style, Hill gave a presentation that was one-part essay and one-part memoir, interspersed with readings from her book A Bound Woman Is a Dangerous Thing. She opened her presentation by talking about her current personal geography goals.

“In my personal geography, I am trying to be a better steward over the wholeness of who I am,” Hill said. “So rather than divide myself into a scholar sometimes and a writer at other times, I’m trying to bring those things together as much as possible.”

Before moving into her first reading, Hill took a moment to comment on the role of all the writers that were in attendance, tying it directly into the theme of “Personal Geographies.”

“When considering the past, present and futures of creative writing, we are tracing where we have been and charting where we are going as writers,” said Hill, who got her doctoral degree in writing from the University of Kentucky. “We become a tribe of cartographers, making connections about how we see ourselves in the context of the spaces around us.”

She opened by reading “Shut Up In My Bones,” a poem about the life she shared with her grandmother that she called an ethnography and testament to the fact that despite being generations apart, they still shared a love of literature.

Hill took the time to punctuate the line “I am the savory morsel in America’s teeth,” by rattling a fork against a plate.

She allowed the poem to percolate in the minds of her audience for a moment before she started to talk about what the book is, not according to publishing categories, but according to her.

“This book is classified as a memoir in verse, but what it is, is a remix of who I am, who I was and who I wish to be,” she said. “What the book does is it takes on the responsibility of persona poems and life writing. It deceptively tells you what I want you to know about others and the subjects in the book while, simultaneously and ironically in the same words, it illustrates and details who I am and what I value.”

Hill chose to include in her book some historically accurate nonfiction vignettes and sought to chart Black women or the subjects’ lives in the currency of Black women’s language, mother tone and gossip. She read one of these poems, called “The Concession of Annie Cutler,” that told the story of a middle-class Black woman who ran away from home with her sweetheart to work at a hotel in Philadelphia until they could marry. However, by the time she had moved, her “sweetheart” had married and impregnated another woman.

As she mapped these women out across the poems in her book, Hill said it was important that the renderings of each woman were representative of them — not only in content but in the form the poem would take on the page.

The care that Hill took to tell these stories was highlighted in her poems “Ida B. Wells” and “Harriet is Holy.”

“Ida B. Wells” is a poem about lynching written in linguistic narrative and mathematical composition. In the poem, Hill lists the number of lynchings reported in each state while Wells was alive, painting a powerful picture of the violence committed against Black men and women.

She brought the mood to a lighter topic by reading her second-to-last poem of the day, “Harriet is Holy.” As she held her book up to the screen, she said that she had tried for a long time to write about Harriet Tubman liberating people in a geographic space, and that that was where the issue was.

“The whole gag with Harriet Tubman is that you could never find her,” Hill said. “For me to try and locate her in any space was not doing Harriet Tubman justice.”

She read “Harriet is Holy” not once, but twice. The poem plays with form and construction in a way that allows it to be read in any direction and still make sense.

The last poem Hill read for her presentation was titled “A Recipe for a Son,” written for her son 26 years ago, which led her to reflect on the path her life had taken.

“When I think about my personal geographies and cartographies about who I am, my mapping is never quite complete and ink spills off the page and onto the table,” Hill said. “My fingerprints are everywhere over this map that is my life and it’s smudged and not perfect.”

Thursday closed with a reading from faculty members Hernandez-Castillo and Khakpour. Both authors were introduced and enthusiastically welcomed by Bertram.

Castillo chose to read a series of poems from his book Cenzontle broken up not by other works, but notes from his journal. Castillo received a silent round of applause from his Zoom audience, and according to Bertram, his reading was “beautiful and haunting.”

Khakpour closed out the evening by reading an essay from her book Brown Album. The essay “How to Write Iranian-America” or “The Last Essay” that chronicled her life as an Iranian-American writer from the time she was a little girl up until she was 17. 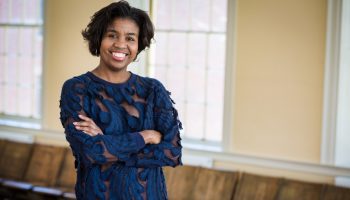