This week is all about traditions and celebration — Chautauqua Institution turns 147 years old today. To kick off the birthday festivities, the Chautauqua Community Band will perform their annual Old First Night concert at 12:15 p.m. Tuesday, Aug. 3 in Bestor Plaza. The familiar blue shirts, led by conductor Jason Weintraub, will once again fill the plaza with traditional pieces.

Weintraub began this long tradition of performing in the plaza for Old First Night after walking around during the day and realizing there wasn’t much going on.

“I thought for Old First Night, to celebrate Chautauqua’s birthday, we should have a band concert,” Weintraub said.

The CCB has now been performing at Old First Night for 25 years. The band is also a way for community members, both on and off the grounds (as well as families), to come together and celebrate these traditions.

The concert will start off with “The Star Spangled Banner” and will continue with familiar marches, overtures and the “Happy Birthday” song. This year’s program also features numbers from the musical Oklahoma. There will be no soloists for this year’s concert, but the community can enjoy the Thursday Morning Brass ensemble. The group will perform alongside the CCB and will also be spotlighted for “The Colonnade Fanfare” and several works by Henry Mancini. The fanfare was written by the group’s euphonium player.

“There’s a lot of traditional songs that we play. There’s various marches that people associate with Old First Night,” said Aiden Chamberlain, Tuesday Morning Brass lead. “There’s also that little bit of identity with themes from different states. So that’s kind of part of the tradition. I’ve been coming to Chautauqua for 20 years, and the band’s done this every year. It’s a real part of that tradition.”

People can come out and enjoy the live music while lounging in the sun on Bestor Plaza, said Weintraub.

“We’re one of the few things where the tradition just keeps going. This concert is more of a park band. Everybody can be having a picnic, singing, humming and whistling,” Weintraub said. “A lot of people tell me this is one of the things they look forward to the most.”

The concert, Chamberlain said, is also a great opportunity for the community to come together to celebrate Chautauqua and enjoy all the traditions that this special day offers.

“I like the atmosphere of being outside. You’ve got families enjoying the day and maybe having a little picnic or some lunch. There’s that nice community feel, and we’re right in the middle of the community,” Chamberlain said. “And with that, you really get that feeling of being right in the middle of Chautauqua with everyone joining in together for the old first night tradition. It’s really nice to be a part of that.” 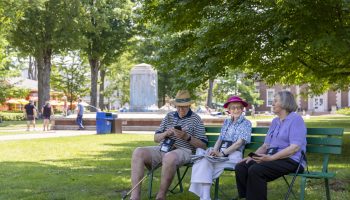