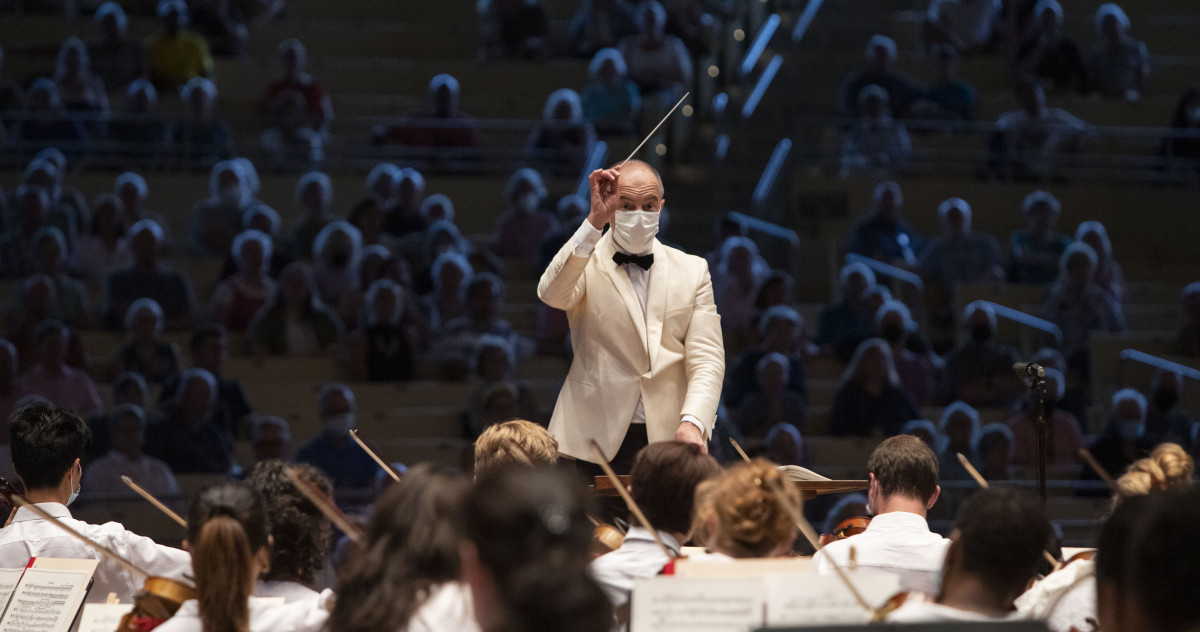 The term for all musicians to play together is fitting for this entire Chautauqua Symphony Orchestra season, and particularly last week.

After losing the 2020 season to COVID-19, followed last summer by a repertoire of smaller works as the pandemic continued, it has been a joy to hear the full ensemble this year. A concert Thursday night doubled that, as Music Director Rossen Milanov invited Chautauqua Institution’s Music School Festival Orchestra to the Amphitheater. It marked the largest return of the students performing in tandem with the professionals since 2019 — an important part of the training they receive here.

The program was fitting: Gustav Mahler’s mammoth Symphony No. 1. Not many orchestral pieces actually benefit from squaring the performing forces as you might think; Mahler’s works are not among them. Nearly 150 musicians felt just about right, and perhaps the best compliment is that it was easy to forget students were on the stage. But this group, trained by MSFO Artistic and Music Director Timothy Muffitt and prepared by 2022 David Effron Conducting Fellow Yeo Ryeong Ahn, are budding professionals, so that isn’t surprising. I’d argue that any slight issues with intonation or cohesiveness — and there hardly were any — were attributable to the realities of melding two orchestras.

If the cymbal crashes and sudden climaxes of this late 19th-century masterpiece can startle the audience, the soft and slowly building opening measures can trouble a conductor. With bird calls and distant military/hunting fanfares set against a delicate background, it is supposed to sound disjointed. That’s hard to do, but here, as throughout, Milanov kept his motions simple to not only hold it together but also to instill confidence. He wasn’t sweating this, so why should the students?

The symphony’s plot, as it were, is the struggle of a protagonist to find peace and redemption amid life’s hardships. But it abounds with lyrical themes, often given to the cello section, which was up to the task. Many of these melodies come from songs Mahler wrote earlier in his career. In fact, the best way to experience the work is by listening to them. The second of his “Songs of Wayfarer” is the basis of the first theme, which the musicians explored with tenderness. While the tempo was slow at times, when it bloomed, you could hear every section: the mark of a good performance.

Milanov’s interpretation of the second movement captured the rustic peasant dance with lusty cellos and basses, clear winds and colorful violins. The third movement’s spooky, minor key rendition of “Frère Jacques,” introduced with a mahogany timbre by the principal bassist, was the heart of this performance. The woodwinds performed the unexpected klezmer-like intrusions with apt buoyancy, and the violins proffered an elegant tone.

The violent opening to the finale was suitably strident, and its subsequent disintegration impressive. Here, Mahler supplies a false ending, throwing one last obstacle at the protagonist, aggressively begun by the violas, that was overcome as Milanov urged the musicians to the climatic victory with big, circular gestures. The horns — excellent from their mellow rendering of passages in the first movement to their iconic “yelps” — were on their feet in full force. I got chills to go with my delight at seeing the full orchestra.