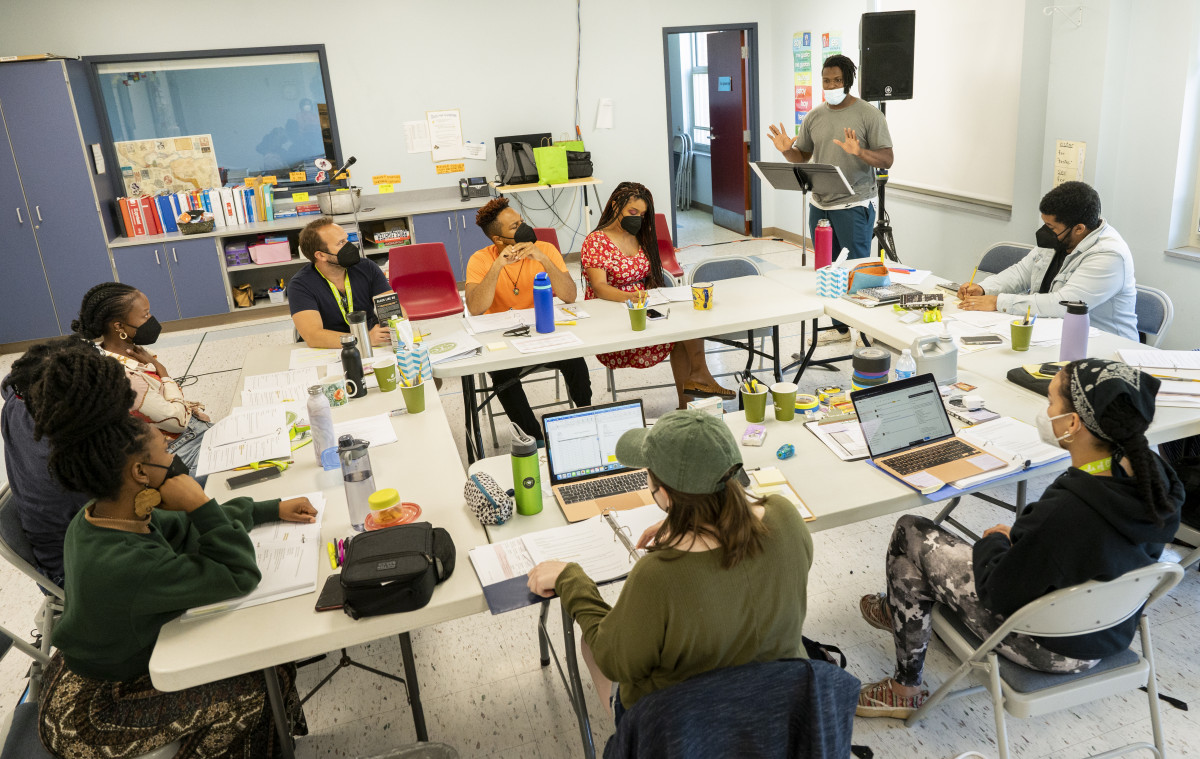 Challenging. Discomfiting. Fascinating. Healing. All of the above form the mosaic of reactions that the conservatory actors of Chautauqua Theater Company’s New Play Workshop Black Like Me have had to the material — and such reactions are the point in CTC’s iteration of the work.

The play is a response to the book of the same name, a memoir by white American journalist John Howard Griffin. In 1959, Griffin medically darkened his skin in order to pass as Black in the Jim Crow South and investigate the racial injustices of the time.

Most of the actors — Ciara Allen, Jamar Jones, Aizhaneya Carter, Malachi Beasley and Michael Crawford — had never heard of the book prior to being cast in the production.

Beasley said that he’s always interested in any perspective he can get his hands on, and values the collective rehearsal process.

“Getting into the work, there have been very, very hard, uncomfortable, healing, loving conversations in the room with this group of people,” said Beasley, who is in his second summer with the CTC conservatory. “The uncomfortable part comes from the book, the truth of the book that this actually happened. And the love and healing come from the ensemble, which is what I’m so thankful for.”

Black Like Me was still in the midst of revisions last week. Playwright and director Monty Cole, who initially conceived and workshopped the piece in 2019, was working in the rehearsal room to engage with his cast’s opinions and feelings. The play was still taking shape until recently, but is focused on a Black ensemble’s modern reaction to Griffin’s memoir, with CTC Guest Actor Adam Smith, the one white cast member, playing Griffin. The Black Like Me workshop will premiere at 7:30 p.m. Saturday in Bratton Theater. It’s the third NPW of the 2022 season — again supported by the Roe Green Foundation — coming off the tails of Y York’s Through the Eyes of Holly Germaine, which wraps its workshop run at 2:15 p.m. today in Bratton.

Jones was curious about Griffin’s goals and felt a sense of uneasiness with regard to Griffin’s reporting of his experience.

“Once you start to hear about his retelling of it, his phrasing of the words, of how he really felt he was one with the people — that’s hard to digest,” Jones said. “But then also, you hear about his journey and the aftermath, it’s something fascinating to process. And it makes you wonder, or at least for me, it makes you think, ‘Wow.’ With the state of the country, and you possibly could argue still to this day, sometimes the truth is something that people really want to run away from — meaning that sometimes people only want to accept the truth or process the truth from a certain messenger or from a certain perspective.”

Crawford also took umbrage at Griffin’s ostensible feelings of unity with Black people and was curious about the results of his approach.

Allen heard about the book Black Like Me in high school and thought it sounded bizarre, but had not thought about it again until she was cast in this production. Researching the material reignited her initial feelings and questions. Griffin’s claims of understanding the Black experience rankled her as well, and she questioned his strategy for attempting to reveal racial injustices.

“It seems almost counterproductive, as if he’s invalidating the real experiences of Black people in 1959 in America, because he felt it was so easy to take on Black skin as Blackness, when being Black culturally and being Black based on your skin are two completely different things, at least for me,” Allen said. “I felt as though he kind of missed the point by putting Blackness in the box of just skin color. I’m really interested to see how the audience of Chautauqua will feel about this script’s interpretation of his message.”

Carter’s mind goes to modern conversations around transracialism, particularly regarding the Rachel Dolezal debacle — wherein a white woman began identifying and falsely presenting as Black, even serving as a chapter president for the NAACP — and how Griffin’s actions might be viewed differently in 2022. She thinks Cole and the cast are trying to weave together a multitude of threads while confronting the discomfort provoked by Griffin’s choices.

“I find it to be a challenging space to operate in,” Carter said. “I think that it’s a lot of labor to try to sympathize and also transport yourself back into the mentality of people in 1959, right before 1965, when the Civil Rights Movement was really popping off. I feel like there was a lot of understanding for this person and for what he did, and in a 2022 context, being so far removed from that time period, I’m really struggling to sympathize with this man who would have been considered an ally at the time. I think he acted in such a way out of a belief that he was supporting and uplifting the stories of Black folks in the country. It’s just really different, what he did then and how it would be applicable today.”

The provocative subject matter and the actors’ thoughtful, knotty feelings about it form the basis for the development of the script. The ensemble said that Cole has wholeheartedly invited them into the process of figuring out what the play is going to be. The conversations they are having, rather than being separate from the final product, are part and parcel of the play itself.

“Monty is so generous as a director and playwright,” Beasley said. “He’s giving us a lot of room to give him things to think on or to chew on, but also he is giving us space to think and embrace each other. And I really, really appreciate that. That’s the one thing that I feel is different than some of the other collaborative processes that I’ve had, where we get done and we go home, and it feels like work. This feels like we’re a family trying to figure out what game we’re playing right now. Present process, not product, which I think should be at the top of American theater’s mind.”