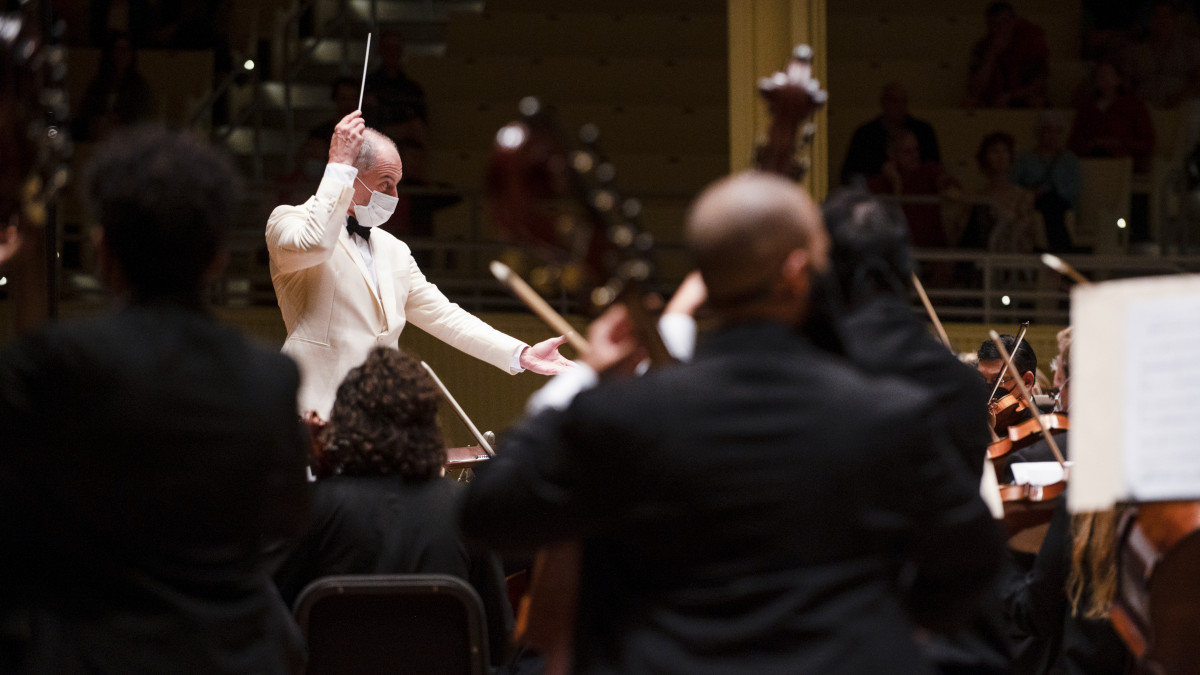 Peter Schickele is many things — a bassoonist, radio personality and a prolific composer of more than 100 works for everyone and everything, from classical music to television shows. But many likely know him by a different moniker: P.D.Q. Bach, and for his comedic compositions that range from satirical to charming, folksy to zany.

Roger Kaza, principal horn for the Chautauqua Symphony Orchestra, has been a fan of Schickele’s work “forever,” and has even worked with the composer — who he described as a “soft spoken but hilarious guy” — once during a performance in St. Louis, where Kaza also serves as principal horn of the St. Louis Symphony. Now, the horn player joins his colleagues in the CSO as a soloist on Schickele’s “Pentangle: Five Songs for Horn and Orchestra” at 8:15 p.m. tonight in the Amphitheater.

Under the baton of Music Director Rossen Milanov, the CSO’s concert is titled “Wit and Genius” — and with Mozart’s Symphony No. 40 in G minor, K. 550, serving as the back half of the evening, it might be tempting to argue that Schickele is the “wit” and Mozart the “genius,” but Kaza was quick to point out Schickele’s prowess.

“Schickele comes from a time when there was such widespread musical literacy, that when you talked about (the composer’s) ‘Iphigenia in Brooklyn,’ or ‘The Abduction of Figaro’, everyone would get the joke,” Kaza said (alas, despite fervent research, this writer still doesn’t get the joke). “It was a rarified, sophisticated humor, but incredibly funny to music lovers. He has very thorough composing chops. He could have gone ‘serious’ but that wasn’t his calling.”

Schickele used “pentangle” to refer to a group of five songs, Kaza said — the piece has five moments — but also as a reference to the 1960s folk rock group of the same name.

“The work indeed has sections that rock and jam, and the final song is reminiscent of an English ballad that a folk rock group might sing,” he said.

In the third movement, Kaza must play multiphonic chords on his horn — a tradition that goes way back.

“The German composer Carl Maria von Weber wrote them into his horn concertino; they are definitely challenging to pull off,” he said. “Another thing (Schickele) requires, in the last of the five songs, is that the performer actually sing the song. OK — I’m not a trained singer, but everyone can sing, right?”

Typically performed with a healthy dose of ham, “Pentangle” is a concerto for orchestra and horn, and while Kaza said Chautauquans can certainly expect some fun, not everything Schickele composes is “one constant joke.”

“‘Pentangle’ has contemplative moments, exuberant moments, wistful moments, but no tragedy or pathos. It’s music that doesn’t take itself too seriously,” Kaza said.

In comparison, pathos and poignancy abound in the Mozart, making the evening balanced in a way audiences may find restorative.

“It’s going to be a lot of fun,” Kaza said, “and I think it’s just what Chautauqua needs about now.”