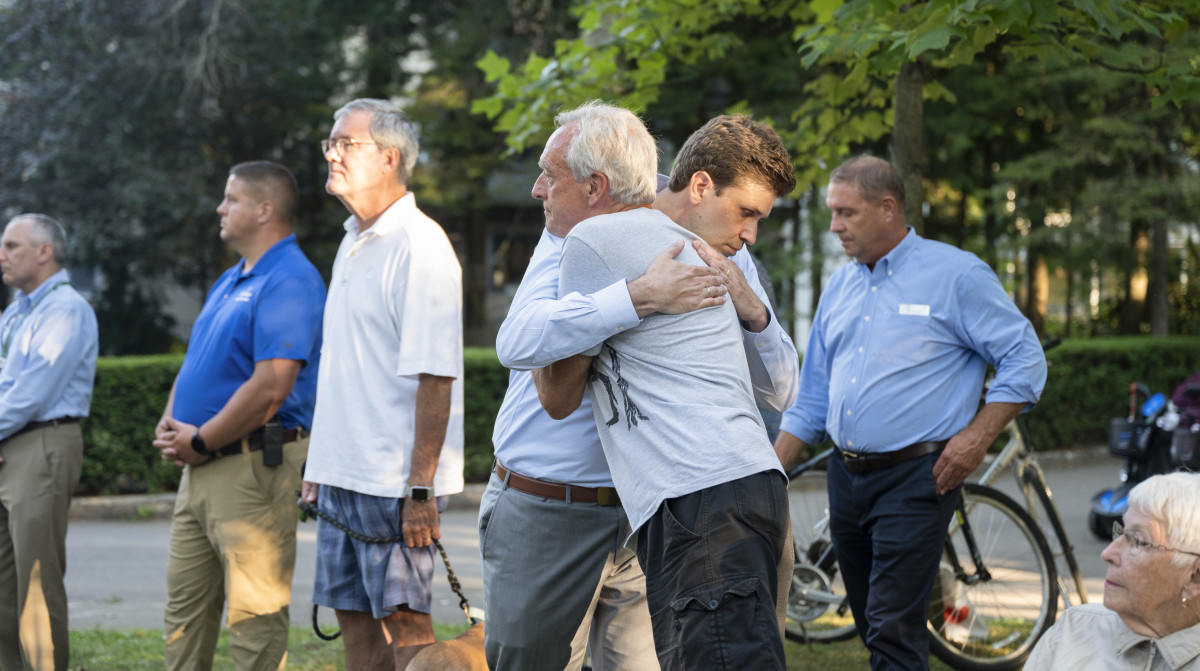 In the aftermath of Friday morning’s unprecedented act of violence in the Amphitheater, Chautauquans were left in a state of confusion and sadness, as hundreds witnessed the stabbing of Booker Prize-winning author Salman Rushdie on the Amp stage in the first moments of the morning lecture.

Rushdie and Henry Reese, director of Pittsburgh’s City of Asylum, were being introduced by Michael I. Rudell Director of Literary Arts Sony Ton-Aime for a conversation on housing and sheltering persecuted artists in the United States — a conversation Rushdie has been having for decades, after nine years in hiding following the publication of his 1988 book The Satanic Verses. Attacked by a 24-year-old New Jersey man who has since been charged with attempted second-degree murder and assault in the second degree, Rushdie was flown to UPMC Hamot; according to law enforcement, among his injuries were stab wounds to the neck and chest. He underwent surgery, was placed on a ventilator, and has since been removed from the ventilator and is on a long road to recovery.

Chautauquans, too, began the process of their own recovery in the minutes and hours following the evacuation of the Amp. As they poured out from the venue onto Odland Plaza and Bestor Plaza, many were shaken, crying and attempting to understand what they had just witnessed.

At a Chautauqua Dialogues event at the Everett Jewish Life Center at Chautauqua, facilitators tried to create a “normal” space to allow Chautauquans to process the morning’s events and “give everyone a chance to say what they’re feeling,” said Catie Miller, who anticipated numerous prayer circles throughout the coming days. EJLCC host Joe Lewis was calm, except for the constant ringing of his cell phone.

Walking around the grounds, many were waiting in line trying to leave the gates, or to get in; the Institution had been placed on a temporary lockdown, and national media had gathered in the parking lots.

At the center of the grounds, Bestor Plaza was already set up for the second Chautauqua Crafts Alliance of the summer, and the crowds surged following the evacuation. Chautauquans Cooper Gilbert and Laura Clark were walking through the artisans’ tents after the Amp was evacuated; Gilbert was in the venue at the time of the attack.

“I didn’t notice until it was happening,” he said. He saw a commotion and said it looked like, at first, Matar was just hitting Rushdie; news was confirmed quickly that the hitting was actually a stabbing. Gilbert said “tons of people rushed to the stage to help.”

Megan Kromer, who has been coming to Chautauqua for years, and was in her fourth week here this season, said she saw Matar “just run onto the stage, hunkered down a little bit, and then he just started beating on (Rushdie’s) arms.”

It all happened so quickly, she said, and in the instant confusion, it took a moment for Kromer to realize what was happening.

The Salzes, who have been coming to Chautauqua since 1969, said Matar accessing the stage “seemed like a blur.”

Betty Salz’s first reaction, she said, was to burst into tears as she yelled for security. Her husband, Arthur, shouted “What is that man doing?”

Everyone was “badly troubled and shaken,” Arthur Salz said. Both were impressed by the calm and orderly nature of the evacuation, and the reaction of audience members to rush the stage to try and help.

Gilbert described the scene, with the announcement to evacuate, as one of “chaos, but not panic. You’re shocked; it’s pretty surreal.”

Clay Smith, who is a Muslim interfaith activist and Chautauquan of 56 years, said he was shocked and saddened that such an act occurred on the grounds. It was a common reaction in the hours that followed.

“In one moment, everything changed,” Betty Salz said. “I felt the world changing right in front of my eyes. … It was quite shocking, almost numbing for this to happen at Chautauqua.”

Clark and Gilbert said they come to Chautauqua specifically because it feels so safe. Their kids, now in college, have always been allowed to walk around the grounds on their own. Ultimately, they wonder how Friday’s events will change Chautauqua.

“This is happening everywhere,” Kromer said. “… Everybody loves this place, but why shouldn’t it happen? This is what America is, and I think until more people have a personal experience like this, we aren’t going to change things.”

Across the grounds Friday afternoon, a similar phrase was repeated: “I don’t have the words.”

“I’m hoping for the best,” said Chautauquan Janet Archidait. “It shouldn’t happen anywhere. … It’s unimaginable. If it can happen in churches and schools and synagogues, then it can happen at our Amphitheater.”