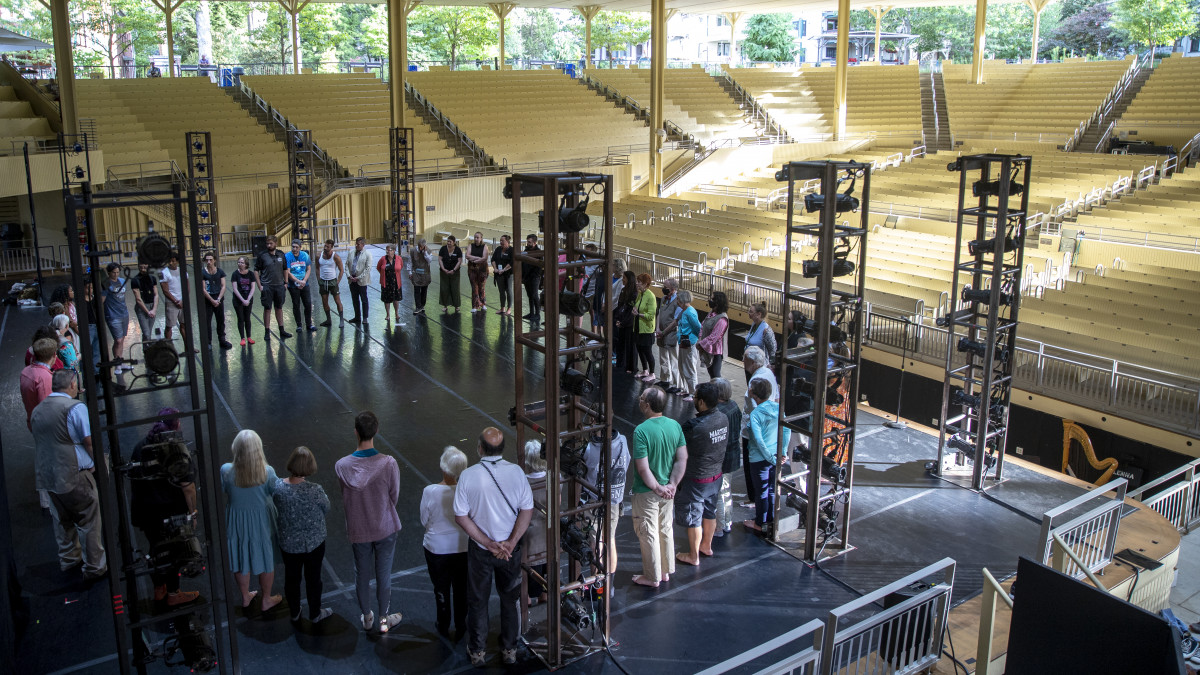 The stage, silent since Friday morning, was prepared for The Washington Ballet. The dance mats were rolled out; the pit was lowered in its sunken space awaiting its musicians. Stage lights were set.

But it wasn’t the dancers, or the musicians, who were the first on Chautauqua’s Amphitheater stage that evening. At 6:45 p.m. Saturday night, more than 50 people, in their stocking feet, stood in a circle and held hands as the Rev. Natalie Hanson, the Institution’s interim senior pastor, blessed the space that, just the previous morning, had borne the violence of the attack on celebrated author and freedom of speech champion Salman Rushdie, who was to be in conversation with Pittsburgh City of Asylum’s Henry Reese.

As instruments were tuned for the Chautauqua Symphony Orchestra, and as School of Music students busked in Odland Plaza, playing, among other pieces, Leonard Cohen’s “Hallelujah” and Bach’s Cello Suite No. 1, Hanson evoked President Abraham Lincoln on the stage at the heart of Chautauqua.

“In the Gettysburg Address, he tells us that we cannot hallow this ground. We cannot dedicate it. It’s already been done, by the lives of the people who lived and died here, who have already hallowed it,” Hanson said Sunday afternoon as she reflected on the gathering. “We don’t actually have to hallow this ground, because it’s already been hallowed by the actions and the presence of so many people.”

Hanson had everyone in the circle — dancers from The Washington Ballet, Institution staff, Amp ushers and crew — go one by one, sharing something that made them feel inspired, or loved, or gave them hope or courage.

“Some people brought laughter and some people brought tears,” Hanson said. “And everybody was listening very hard, and echoing each other. It was, for me, a very holy moment. We closed in the sense of reminding each other: ‘This is what makes this holy, don’t forget this moment.’ And everything that matters so much more than this one, painful person and this one, painful act.”

In looking at each others’ faces, in that small circle as the sun cast shadows across the Amp bowl, Hanson asked those gathered to “just remember how precious each of you are, to God, and to each other.”

It was many of those gathered who had seen first-hand the attack on Rushdie, had assisted in the Amp’s evacuation, and who, in all likelihood, prevented the tragedy from becoming more unspeakable. Hanson, stepping down from the stage covered in the protective mats, anointed with oil anyone who wanted it.

A little more than an hour later, the Amp was again filled with Chautauquans, looking forward to an evening of healing, restoration and a semblance of normality, as news was breaking that Rushdie had been removed from a ventilator and was speaking and laughing.

“I don’t take welcoming you back to the Chautauqua Amphitheater this evening lightly,” he said. “I know that, for some, being in this space may be difficult tonight.”

He thanked staff, and the Amp crew, the group of cleaners who had sterilized the stage earlier in the day, and the Department of Religion for the blessing. These were feats, big and small, of generosity that helped “reclaim what is ours and what is yours.”

“Mr. Rushdie is one of the world’s greatest proponents of freedom of speech and expression,” Hill said. “He said once, ‘How to defeat terrorism? Don’t be terrorized.’ Tonight, we pause to consider his courage. Tonight is about reclaiming our sacred space from violence and hate. Tonight, we return to the Amp as a sign and symbol that the work of Chautauqua is critical to combat the madness that can exist in our world. We return tonight to honor the lifelong work of Mr. Rushdie. We return tonight to prove that the mission of Chautauqua, a mission of enriching lives, a mission of convening critical conversation, a mission of elevating the best in humanity cannot and will not be silenced. Our voices will not be muted by those who want to scare us from carrying out this important work.”

“But sometimes we don’t know how to give voice to something as unspeakable as what happened yesterday,” he said. “… You may have heard me say, sometimes, that some things are too unspeakable. Sometimes words fail.”

And when we’re processing emotions so complex, so difficult, that they transcend words, we turn to our artists, Hill said.

“I was reminded, talking to Maestro Milanov, how many times our nation and our world have called on artists to serve as healers,” Hill said. “May the majesty of the dancers and the soaring music of the orchestra reclaim and bless this sacred gathering space. May their artistry serve as an expression of our continued prayers for Mr. Rushdie and Mr. Reese and for each and every one of you.”

The Amp after the performance was again filled with crew and tech scurrying about the stage, working into the night to turnover the space from an orchestra venue to a place of worship. And when Hanson took the stage Sunday morning for the worship of service and sermon, she again spoke healing to those gathered.

“There is a wide-spread sense that the attack on Mr. Rushdie was also an attack on us and that — along with trying to take Mr. Rushdie’s life — the attacker has taken our sense of safety and peace,” she said. “For the faith community, on Sunday mornings, the Amphitheater, this stage, is a holy place; and before we enter into worship, we want to reclaim this space and time as sacred, and declare that God is with us, and has never left us.”

As the congregation prayed, Vice President of Religion Melissa Spas and Director of Religion Maureen Rovegno anointed the stage and the Amp aisles with water — water, Hanson said, that was “the symbol of our tears, but also the symbol of birth, life, new hope.”

Oil and water. Arts and worship. Private blessings and the public contingent of a full congregation.

With these blessings, these calls, these invocations, Chautauqua began reclaiming, and the long work of healing.