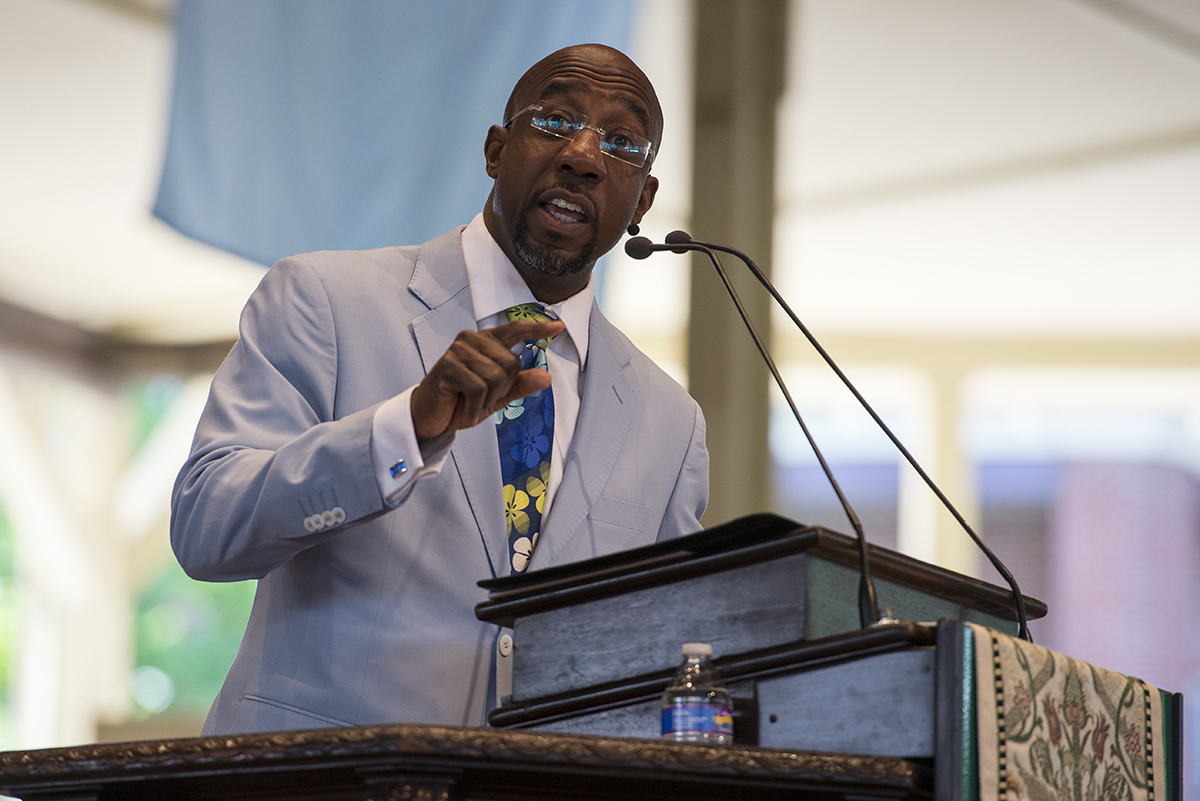 “I remember my grandmother’s hands, planting gardens, feeding hungry grandchildren and baking chocolate cakes. She taught me the meaning of Romans 8:28: ‘We know that all things work together for good for those who love God, who are called according to his purpose.’ I struggled with that text and thought about my grandmother,” he said. “Most of us would not eat flour all by itself, and we don’t really like raw eggs for breakfast, nor would we drink vanilla extract as a beverage, and those who are lactose intolerant would not drink milk. She could take what was bitter by itself and cause them to work together for good. Hands and feet have a story to tell.”

Warnock recalled his grandfather, who was the head deacon at his church, Friendship Baptist. He was a big, burly man who was brilliant, articulate and well read.

“He had lots of books and I remember his hands. He read with his hands because he was blind. He groped his way through 10,000 midnights, in the dark days of crucifixion, when ‘Southern trees bore strange fruit, blood on the leaves and blood at the roots,’ ” Warnock said, recalling the song made famous by Billie Holiday and Nina Simone.

Those tragic song lines are being reinscribed today, he continued, when people die with their hands up or on a steering wheel, when a 12-year-old with a toy gun is killed by police or when a man is pinned down with hands behind the back.

“My grandfather’s hands negotiated the darkness, overcoming the madness,” he said. “He would put his hands on our heads and identify each of his grandkids and on Sunday morning I would hear his size 14 feet go out, headed to church to hear the Gospel story.”

The Gospel story he heard was about feeding the hungry, healing the sick, touching lepers, opening the eyes of the blind and bending over to write in the dirt. When Jesus stood up again, there was no one left to accuse a woman caught in adultery.

“Jesus was faithful to love and justice, and as a death row inmate in the Roman prison-industrial complex, he put his feet upon Golgotha, but he got up from the grave,” Warnock said. “His disciples need a guidepost, a spiritual place and he showed them his hands and feet.”

The disciples, at that point, were on the other side of Calvary. It was a terrible week; from our distance we call it Good Friday, but it was a bad Friday, he said.

“Jesus was gone, the enemies were closing in, options were low and anxiety was high,” Warnock said. “His hands had been nailed to the cross and his feet tagged in the morgue and out of that experience came a message of faith.”

Evil is real but it does not have the last word. The light shines in the darkness and is not overcome by it. Jesus asked his disciples why they were afraid.

“That was a dumb question after a terrible week. He told them to keep working, building, struggling with their hearts and hands and feet. He told them, ‘Look at my hands and feet. I’m scarred, yet I have overcome,’ ” Warnock said. “ ‘I’m a scarred savior.’ That is the oxymoronic character of redemptive power. Scarred hands and scarred feet doesn’t mean it did not work. God is still operating, turning scars into stars.”

Scarred hands are open hands, Warnock said, and it is in openness to one another that we share stories so that we are healed. “Once I have seen your scars I know who you are” like Odysseus’ nurse who recognized him by his scar when she bathed him.

When Rabbi Abraham Joshua Heschel marched with Martin Luther King Jr., he said that his feet felt like they were praying.

“On this mountaintop experience of Chautauqua, we are tempted to stay — but we have to leave,” Warnock said. “We need praying feet when naked bigotry shows up unabashed and unashamed. We need hands and hearts that are working and praying together.”

“I am preaching with my eyes wide open and when I get discouraged and want to give up, I look up, and I want to see God across the deep but most of the time I see clouds and birds flying by. I like to see geese, they fly together and believe in victory,” Warnock said. “The one out front, who looks like it is getting all the glory, is actually working the hardest. And when it grows tired, it rotates back into the formation and another moves into its place without a fight or a filibuster or a church schism. You don’t have a geese government shutdown because the collective is more important than the individual.”

“It has been a bad week, but hands and feet have a story to tell of crucifixion and resurrection, of struggle in the hands, running in the feet and joy in the heart,” he said.