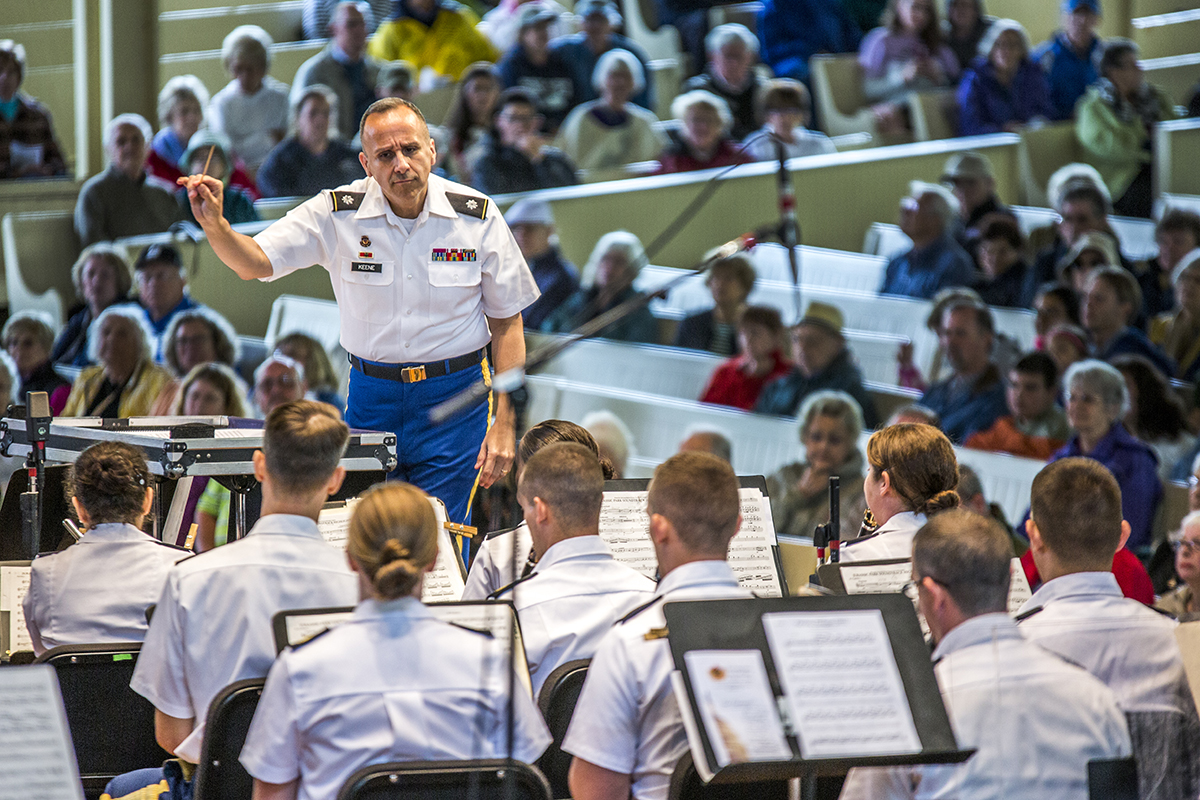 “I actually auditioned twice,” McCullough said. “The first year I auditioned, I didn’t get in.”

McCullough still brings his clarinet to the grounds each summer. But now, he also brings the U.S. Army Field Band and Soldiers’ Chorus. They will perform at 2:30 p.m. Sunday in the Amphitheater.

“Chautauqua is always a destination we look forward to going to,” McCullough said.

Col. Jim Keene serves as conductor of the band. He said the core function of the group is patriotic in nature.

“When people think about patriotism, the first thing in their mind is likely patriotic music,” Keene said.

However, the band doesn’t restrict itself to mainstays like Sousa marches and big band tunes.

“No single genre or type of music or even age group is overly represented,” Keene said. “That’s always by design.”

Sunday’s concert will include a set of Latin arrangements and music by living composers. Keene said the eclecticism of the band’s programming is a reflection of Americans themselves.

“Americans came from all sorts of different backgrounds, so we relate to a lot of different genres of music,” Keene said. “The mission of the group is to connect with many different parts of America, to tell the story of how complex and diverse our country is.”

Music can also be used to teach audiences about American history, according to Keene.

“We do programs where we focus on a historical period,” he said.

When it comes to commemorating milestones in American history, Keene said music helps people who lived through certain events stay connected to those memories.

“Music is like a time capsule, where people can remember and be transported to a particular time,” Keene said.

The band ultimately functions as a public face for the military. It’s a tradition that goes back as far as the 13th century, when military bands were used to direct troops on battlefields. These days, military bands around the world are used for both entertainment and ceremonial purposes.

As an artistic institution, however, military bands in the United States often find themselves having to make a case for their continued existence.

“There have always been debates in Congress and among military leaders,” Keene said. “How many bands do we need? That’s a continual discourse that’s happened in my career.”

Keene believes all art “has to serve some kind of practical purpose” to stay viable, whether that means performing for diplomatic functions or simply inspiring patriotism.

“When art becomes used for art’s sake and no longer has intrinsic value to taxpayers, that’s when we get in trouble,” Keene said. “As long as we’re serving the public and the military by giving them what they need and want, I think music will survive forever in the military.”