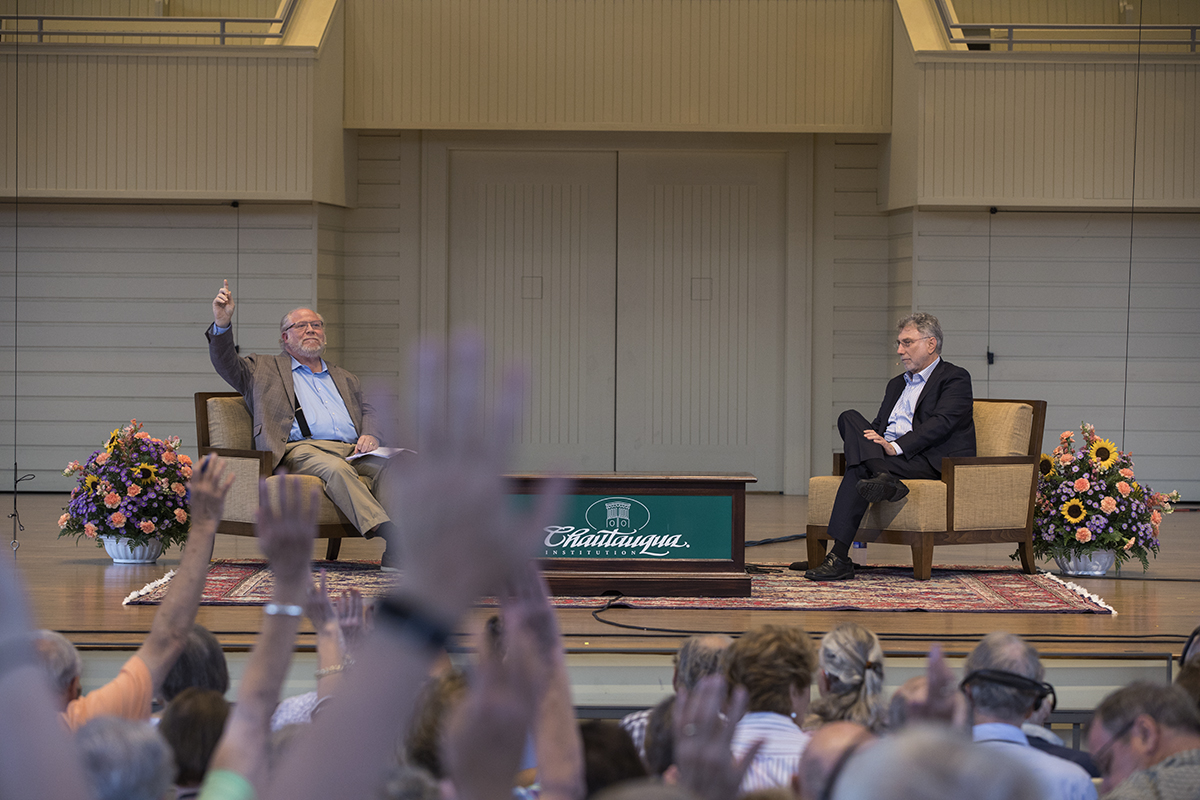 Throughout Week Eight, “Media and the News: Ethics in the Digital News,” a number of journalists and journalism scholars have discussed the many terrors the American free press faces.

“It’s a great time to be a journalist,” Baron said.

On Friday morning in the Amphitheater, he spoke with Eric Newton — the innovation chief at Arizona State University’s Walter Cronkite School of Journalism and Mass Communications — about why that is, and what obstacles still remain in the field.

There is historical precedent for that dynamic.

As Newton revealed with a clip from “All the President’s Men,” Bob Woodward and Carl Bernstein’s Watergate investigation was an inspiration for young Baron. But even though Woodward and Bernstein worked at the same newspaper Baron now runs, back then he had no plans to work in D.C.

“For much of my career I actually had no intention of going to Washington because every time I went to Washington for reporting, I found it largely disconnected from the rest of the country,” Baron said.

But when Newton then played a second film clip, it wasn’t from a story that inspired Baron; it was one he was in.

The film, 2015’s “Spotlight,” depicts the Globe’s 2001 investigation into the Catholic church’s cover-up of sexual assault and pedophilia in Boston parishes. In it, Liev Schreiber portrays Baron, then a newcomer to the paper.

At his very first morning meeting with the staff, Baron suggested they look more closely at the case of John Geoghan, a priest accused of child molestation.

The documents for the case were sealed, the staff pointed out, but Baron suggested they go to court and get them unsealed.

“The response was silence,” Baron recalled. “I think people were a little shocked to hear their new editor, on the first day, at the first meeting, talk about bringing a legal action against the Catholic church, which was then the most powerful institution in New England.”

But the team ultimately decided to go forward with the story, conducting the lawsuit and the investigation in parallel.

And as it turned out, Geoghan wasn’t the only pedophile priest that the Archdiocese was protecting. The investigation grew from there.

“Tell us what the elements of this kind of journalism are,” Newton prompted.

For Baron, it all comes down to accountability.

“The purpose is to find out what’s really going on,”  he said, “particularly when it involves wrongdoing.”

This is especially important when the potential wrongdoers are powerful institutions. Holding the weak accountable may be easier, but holding the strong accountable is more impactful.

“We have an absolute obligation to expose wrongdoing,” Baron said.

This obligation extends beyond the church; the Globe has exposed the controversial practices of medical institutions, high schools and various other powerful groups.

In fact, it is that drive to shed light on corruption and criminality that inspired the Post’s new motto — “Democracy Dies in Darkness” — adopted under Baron’s leadership.

And though the decision to adopt a new motto preceded President Donald Trump’s entry into the White House, Newton was still curious about whether the selection has new relevance now, under the Trump administration.

“To what degree is our democracy in danger?” Newton asked.

“I don’t know that I want to pronounce on that,” Baron said. “I think that there are some worrisome signs, for sure. Most personal to me and my profession is the constant threats against the press and the threats to a free press.”

Journalists are just doing their jobs, day in and day out, he added. And yet the president has “demonstrated a lot of disrespect for the role of independent press” in America, going so far as to call for some journalists to be jailed.

A big part of Trump’s motivation is the rise in leaks from within his administration, which the Post has used to break stories while at the same time working to protect the anonymity of its sources.

Impartiality, though, provides its own set of issues in the modern politically polarized environment.

“In some sense, yes, but he isn’t like any other president that I’m aware of,” Baron said.

The important thing, though, is that someone who has as much power as Trump be regularly scrutinized, be they Republican, Democrat or Independent.

In that context, Newton asked, “Do facts still matter?”

Truth, Baron answered, is the biggest challenge the media faces; more so than finances, or technology, or credibility or political attacks.

“Fundamentally, there has to be a baseline set of facts that people work from,” Baron said. “And right now we don’t have (that).”

Pivoting from the public to the private, the pair explored the implications of Amazon founder and CEO Jeff Bezos’ 2013 purchase of the Post.

Bezos, Baron said, was a financial boon to the paper; because of his push for a more sustainable long-term financial model, last year was the Post’s first profitable year in a long time.

“He’s very much committed to the mission of news organizations like The Washington Post,” Baron said. “(Bezos) very much believes in our mission of shedding light in dark corners, of upholding democracy and making sure that it functions the way that it ought to.”

This consistency of purpose is particularly important given that the Post is otherwise in the midst of fundamental changes in both focus (going from regional to national) and form (as it increasingly explores non-print avenues of telling the news).

That transition reminded Newton of a turn-of-phrase Baron had coined.

It is the industry’s moral and ethical guidelines that it needs to keep, Baron said. Even when writing for new platforms, “those principles and those values” have to remain.

Meanwhile, the media has “to dispose of the idea that … (it’s) all about print.” Journalism happens through phones and laptops more so than pulp and ink nowadays.

And in that vein, the thing that must be acquired is new skills for storytelling in a digital age.

“When you interact with a mobile device, a phone, and you’re reading your news, it’s very different from … in the morning opening up your newspaper over a cup of coffee,” Baron said.

This changes the relationship between reader and written word, and thus between storyteller and story, too.

Of course, the Post is not the only paper going through this tumultuous period. And while the The New York Times may be thriving (well enough to be in a neck-and-neck competition with the Post, many other smaller local papers are struggling.

“We’ve lost 20,000 local newspaper/newsroom jobs in the last 10 years,” Newton said. “We’ll never know what these journalists would have written. Do you think that the techniques and the tools that you’re developing at the Post can help?”

Baron noted that while his paper is indeed developing new ways of conducting journalism, not all of them will be applicable for regional dailies. Embracing new technology will be critical, but it’s also costly.

It is imperative that the problem be solved somehow, though, because right now, not every important story or issue is getting covered.

“A lot of people in state government and local government, and in other powerful institutions, are basically going uncovered,” Baron said. “Nobody is watching them, and they know that. And I think that that is really concerning.”

Economic issues aren’t the only ones the media faces. Declining public trust in the mainstream media, for instance, threatens the relationship between papers and their audiences.

“I think we need to be more transparent about who we are and what we do,” Baron said.

This means showcasing the diversity that currently exists in newsrooms, as well as providing access to evidence like legal documents and interview transcripts.

Ultimately, the conversation came back to the investigative journalism that had inspired Baron as a young man.

“If you look at the public’s opinion of the press during the Watergate investigation, it was pretty low, too; really low,” Baron said. “And there were many people who felt the press’ investigation of President Nixon was wholly unjustified, wholly politically motivated. … And ultimately they discovered that in fact there was a lot of merit to that investigation, and the approval ratings for the press subsequent to Richard Nixon’s resignation rose sharply.”

Will the same reversal happen regarding the modern press’ coverage of Trump?

“Talk to me in five years,” Baron said.

Wrapping up, Newton asked Baron what one thing he would ask his readers keep in mind if they wanted to act as “ambassadors for quality journalism.”

Elaborating, he noted that there are plenty of news sources that do nothing but validate their reader’s pre-existing beliefs or stick to a party line. It is important to support those that don’t, those that “take you out of your comfort zone.”

“If you’re reading information or you’re reading a news source — a so-called ‘news source’ — that all the time only gives you things that affirm your previous point of view, (it) is not … trying to give you an honest view of the world, (or is) doing an honorable job,” Baron said. “It’s one that’s trying to pander to you.”