Jack Gulvin learned about local plants and birds as a teenager at the Jamestown Audubon Society under Robert Sundel.

“If I ever had somebody I’d refer to as a mentor in my life, it would be Bob Sundel,” Gulvin said. “He led nature walks here at the Bird, Tree & Garden Club for a number of years.” 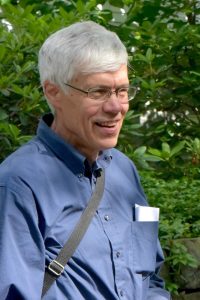 Gulvin earned his bachelor of science degree in forest management at Syracuse University before working as an employee for the U.S. Department of the Interior for 13 years. He has worked across the country in national parks such as Yellowstone and Grand Teton, mainly as a bureaucrat, Gulvin said.

“I was happy to give them my two weeks notice and depart,” Gulvin said.

Gulvin heard BTG was looking for a naturalist and decided to give it a go. That was 19 years ago, and he has been here ever since.

Gulvin leads the Purple Martin Chats at 4:15 p.m. the first four Fridays of the season — starting Friday, June 29  — at the purple martin houses between Miller Bell Tower and Sports Club. He opens with a brief introduction on the purple martins, then participants can observe Gulvin’s process in maintaining the houses.

The chats offer a chance to learn about migration and habitat characteristics of the birds in addition to check out a nest up close. Gulvin pulls the young birds out of the nest, placing them in a bucket. Contrary to popular belief, this does not alienate the babies from their parents.

“That’s probably the No. 1 myth in America today that if you handle a baby bird they’ll be abandoned by their parents,” Gulvin said. “Not a shred of truth.”

Gulvin said the birds are now heavily dependent on human housing. People enjoy having the martins in their community or backyard because of their reputation as superb flyers, as well as having social interactions closely analogous to humans, Gulvin said.

Gulvin checks the nests nine days, and again at 19 days, after the young have hatched, primarily to remove blow fly larvae from the weeds of the nest. With the purple martins beginning their migration back to Brazil in the middle of the Institution’s season, the chance to see the birds on the grounds are limited.

Typically, the young purple martins can fly as soon as 26 days after hatching, Gulvin said. Often, the young can be larger than their parents by the time they migrate.

“The parents, they have to stop feeding them and call to them from outside the nest to get them to come out and join the world,” Gulvin said. “Again, there’s analogies to human societies as well.”

Gulvin also leads weekly nature walks at 9 a.m. on Fridays starting at the lakeside of Smith Wilkes Hall. The participants are guided along Fletcher and the ravine ending near the Buttery Garden at the south end of the grounds. Gulvin takes the walk a day ahead and an hour before to note interesting features that participants might not normally notice.

“I don’t know much about the different stuff people plant,” Gulvin said. “I tend to focus on the stuff Mother Nature plants.”

The walks finish in time for participants to make their way to the Amphitheater for the 10:45 a.m. lec- ture. Gulvin said his favorite part of being able to lead both events is the enthusiasm of the participants and answering their questions.

“Chautauquans are an inquisitive, curious bunch of people,” Gulvin said. 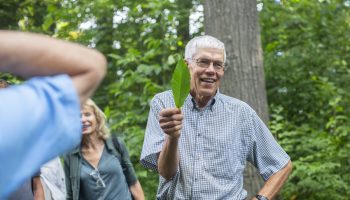 Gulvin to Share Delights of Nature in BTG Walk