Americans work longer, take less vacation and retire later than any other people in the industrial world. We spend an enormous part of our lives working, and we don’t consider the intersection of work and faith,” said the Rev. Skye Jethani.

Jethani was preaching at the 9:15 a.m. Tuesday morning worship service on July 31 in the Amphitheater. His sermon title was “Healing the Sacred — Secular Divide,” and his Scripture was 1 Corinthians 7:17-24, leading the life God assigned to you.

Several years ago, there was a commercial during the Super Bowl that featured a man standing on a well-manicured lawn beside a pool. Looking at the camera, he asked: “Why do we work so hard? We don’t take August off or stroll by the cafe after work. It’s because we are crazy, hard-working believers.” Then he drove off in a Cadillac.

“Some critics found the commercial too materialistic, but no one acknowledged how accurate it was,” Jethani said. “We have a gap between Sunday and Monday, as if God cared about Sunday but not Monday.”

There are some churchgoers, he said, who have never heard a sermon about their work.

“It’s as if God created the heavens and the earth and then retired to full-time ministry,” he said.

He told the congregation that the world had been divided into two categories: the things God cares about are sacred, and everything else is secular.

“We can blame one person for this divide,” Jethani said. “Eusebius, a fourth-century bishop of Caesarea Maritima, who said there were just two ways to live.”

The first was the “perfect” way, which only included the clergy who spent their lives on “heavenly things.” Since that was the only perfect life, only clergy had a calling, a vocation, from God.

“The rest of the schlubs,” Jethani said, “lived a ‘permitted’ life. They toiled on earth, and their labor did not matter to God. They had no vocation.”

The Reformation changed that thinking. Martin Luther, Jethani said, was an advocate to heal the divide between secular and sacred. Luther said that the work of monks and priests might be holy, but it did not differ from the work maids and farmers do.

“It wasn’t just the clergy who had a calling; all (people) are called to something in the world,” Jethani said.

The Corinthians sent the Apostle Paul a list of questions. They wanted to know which conditions in life were most sacred, what brought the greatest fulfillment in life? Was it to be married or single, slave or free, circumcised or uncircumcised?

“Paul sent them back a letter that said this was his rule in all the churches, that each person should live the life that God had called them to,” Jethani said.

The first issue was circumcision.

“What a weird issue,” Jethani said. “When I was a young pastor, I proposed a four-week series on circumcision.”

“The committee did not react as you did,” Jethani said. “They turned to the senior pastor as if to say, ‘Can he do that?’ The senior pastor said, ‘It’s no skin off my nose.’ ”

God does not have categories he cares about, or categories that are sacred, Jethani said.

“All have a calling,” he said, “and if you live the life to which God has called you, you will finding meaning there.”

Jethani credited the Puritans with a theology of vocation that has three parts. The first part applies to everyone, that “all people are called to live in union with God.”

The second part is the common calling of “all people, in all places, at all times,” he said.

The third part is a person’s particular calling, he told the congregation, using his own life as an example.

“I am a teacher, minister of the Gospel, a writer,” he said. “I am the father of my children, and I bear a special responsibility for them that you do not have, even though I appreciate how my community cares for them. I am a husband to my wife, Amanda, and if anyone else has that title, see me on the back porch after the service.”

There is no hierarchy of work; all work is held in honor. There is no sacred or secular divide.

“The fullness of the Christian life can be lived by anyone, anywhere,” Jethani said. “This fullness is not found in what you do but in the God who is there with you. The sacred is found when you choose to live a life with God in all vocation.”

Joan Chittister illustrates how mastering humility could save America 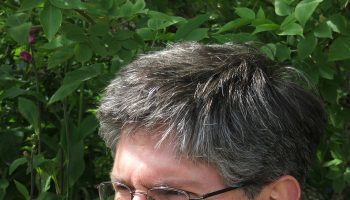