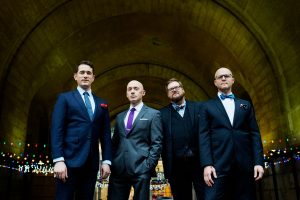 The quartet will perform at 4 p.m. today, July 22, in Elizabeth S. Lenna Hall as part of the Chautauqua Chamber Music Guest Artist Series. Unlike any other chamber music concert this season, the performance will be entirely vocal. While today’s program exclusively features music from the 16th century and earlier, NYP has in its repertoire a range of music styles, including more contemporary works.

The group performs a range of music, from Gregorian chants to brand-new commissioned pieces. Countertenor Geoffrey Williams said the quartet works to find connections between centuries of music.

“We’ve found that because we have a natural love for the earlier repertoire, especially sacred music and a capella singing, we’ve found a connection between the clarity and cleanliness of ancient repertoire and the way modern composers tend to write,” Williams said.

“So when we’re looking for composers to write new pieces for the group, we look for someone who can find parallels from the older repertoire — harmonic or melodic inspiration, similar texts — and that’s how we try to make programs work together,” Williams said.

According to Williams, these parallels do more than connect the pieces to one another — they connect them with the audience.

“We’re always trying to find that sort of connective tissue between centuries, so our audience has something to sink their teeth into,” Williams said.

NYP’s programs often feature ancient sacred music. While such pieces were not written with chamber music performance in mind, Williams said the pieces were designed for similarly intimate performances.

“Just because it’s largely music that was not intended for large publication — it was meant for smaller crowds and for church services — it’s still very viable chamber music,” he said.

Today’s performance features pieces from before the 1600s. Even within this timeframe, the pieces vary dramatically, Williams said.

“It’s entirely music from 1600 and before — there’s no new music in this program,” Williams said. “But it’s interesting because there’s sacred music, there’s secular music. Some of it is very light-hearted material, and some of it is very intense.”

That intensity, Williams said, begins with the opening piece: 16th-century Belgian composer Jacob Clemens’ “Tristitia obsedit me” (The sadness surrounds me), based on the final writing by the same name of 15th-century Italian priest Girolamo Savonarola. Savonarola spoke and wrote against corruption in the clergy during the tumultuous Medici reign. He wrote “Tristitia obsedit me” while awaiting execution in 1498.

“We open with a sacred piece that has a text from the very controversial priest, Savonarola,” Williams said. “He ended up being excommunicated because of his controversial writing; he was deemed a heretic. So the piece has a real sense of intensity.”

While Savonarola was executed before he could complete “Tristitia obsedit me,” the piece became one of his most widespread writings.

The program will also feature lighter pieces, including both secular and sacred music from France and Italy.

Williams said he believes that NYP, as a chamber group, has the ability to make even the oldest pieces new.

“You have the opportunity to take more risks: interpretation, dynamics and so forth,” Williams said. “It also means each performance is more spontaneous; you can come together and perform a piece that feels new every time.”