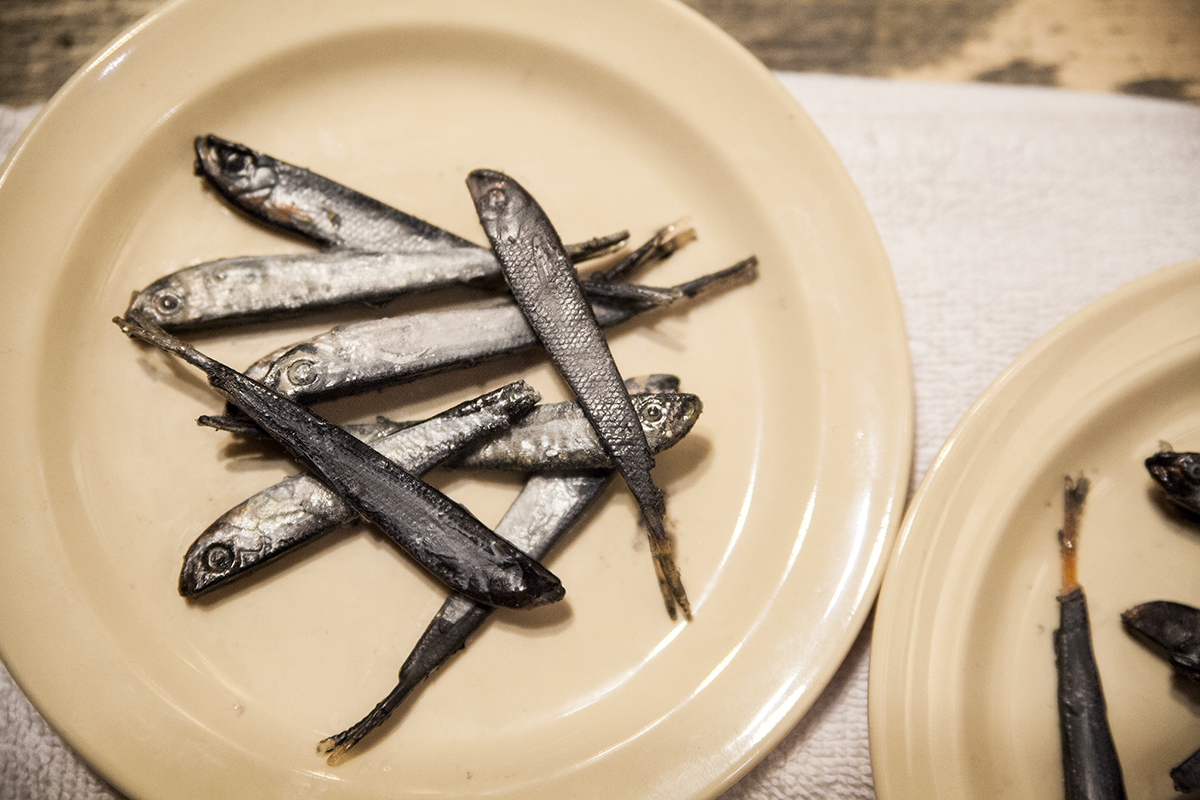 Sardines sit behind the scenes of CTC's "Noises Off" on Friday, June 7, 2017. ERIN CLARK / STAFF PHOTOGRAPHER

There are a lot of sardines in Chautauqua Theater Company’s production of Noises Off, which runs through Sunday at Bratton Theater, but there are even more sardines backstage.

“We started off with 90; now we only have 60. We do not know what happened to the other 30 fish,” said CTC properties master Hyla Sue Stellhorn.

Those small, oily fish are a favorite snack of the characters in the British sex farce within Noises Off. Plates of sardines comically travel on and offstage, end up in the wrong character’s hands, and sometimes get smooshed into a character’s hair or dropped down a blouse.

In reality, the Noises Off sardines are pieces of plastic fishing bait, ordered on Amazon and painted gray, Stellhorn said. Most have been glued in piles onto plates, but the play also requires loose sardines.

The quantity of props — from sardines to multiple rotary phones and cardboard boxes — was the prop shop’s first challenge for Noises Off. Further complicating the job was that props disappear and reappear in each act, and must be made to last.

A Westfield resident, Stellhorn learned Noises Off would be part of the current CTC season last year and began prepping for the show in February. She started by reading a script and making a list of the props mentioned, then contacted scenic designer Tom Buderwitz to learn his vision.

At the start of the season, the rest of the props team — Samuel Stark, assistant properties master; Danielle Ferri, props artisan; and Katherine Sharpless, props intern — arrived. The CTC production includes a few unique touches of set dressing, like a coat of arms and cuckoo clock. But playwright Michael Frayn’s specific writing laid out what the show needed, and the team started working on building props that could withstand the two-week run.

“This show is really hard because as fast as we were making things, things were breaking in rehearsal because of all the physical action,” Stellhorn said. “So everything we made, we had to really consider how it is going to survive.”

Several props get dropped, tossed and slammed. There are three telephone props in the show, and each one has been coated with a flexible, clear sealant that protects the outside from chipping. A fire ax prop, carved out of foam and painted red, was similarly coated with sealant.

And then there are those prolific sardines.

The first batch of 30 fish arrived already colored gray and took additional paint beautifully, Stellhorn said. The other 60 arrived and were pink, and something in that color made the gray stage paint flake instead of stick.

Unfortunately, the props shop didn’t find that out until after all the bait was painted. The fish were painted three times when all was said and done. A coating of tacky glue helped the paint stick.

“The characters are so physical with the sardines,” Stellhorn said. “They catch them on plates, they sit on them, they get shoved down people’s clothes, they get stuck in people’s hair. And we couldn’t have that paint rubbing off on the actors and their costumes and the set.”

With less than a week left for the show, several missing sardines are likely gone for good, Stellhorn said, noting a scene in Act 3 has sticky, loose sardines fall to the floor before a character mops them up with newspaper. But sardines have shown up on the prop van and in hiding places onstage. Several sardines reappeared once the props team discovered an actor was leaving sardines in a drawer onstage.

The sardines that are still in the show are holding up fairly well, although some are starting to show wear. Stellhorn said Sharpless, the CTC props intern, painted the many sardines. From the start, she doubted her days painting sardines would end.

“She spent days painting fish,” Stellhorn said. “Even though the show is open now, she firmly believes that she is not done painting fish. And I think she’s probably right because they get lost very easily.”