Matt Ewalt, chief of staff, to discuss his role at Chautauqua

Introducing and questioning Amphitheater lecturers, speaking periodically at the Wednesday morning Leadership Porch Discussions at the Hultquist Center and attending the weekly strategic planning listening sessions in the Hall of Christ — These are a few of the places on the grounds where Chautauquans encounter President Michael E. Hill’s chief of staff, Matt Ewalt. 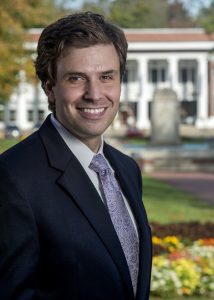 “I hope to share an overview of the process and guiding philosophy behind our world in theme development and the lecture platform,” Ewalt said. “But also, really sharing the greater power of Chautauqua, not only as a convener but as a community in conversation. That particular work serves as a spark for that which matters. It gives this place incredible power.”

Ewalt did not grow up coming to or hearing about Chautauqua. Until a summer vacation convinced his mother that Vermont was the place to be year-round, he lived in Washington, D.C. He said that halfway through seventh grade, soon after he’d started Boy Scouts, he moved with his parents and younger brother to the Burlington area and switched schools for the second time that year.

In Pittsburgh at Carnegie Mellon University, he majored in professional writing, within the English department, and focused on its journalism track.

It was after working for two years at the Times Observer in Warren, Pennsylvania, where he started as a staff writer and became news editor, that Ewalt first learned about Chautauqua. The school year was coming to an end and as he was assigning education coverage, the question arose as to how else the reporters could think about education in the area.

“I discovered a calendar of events for this place called Chautauqua, 40 minutes away,” Ewalt said. “I was realizing, upon looking at that calendar, that a small-town reporting staff could cover some of these lectures during a Chautauqua season, not only for the educational value of the lectures themselves, but also (for) reminding folks of this incredible resource a short drive away.”

Shortly after hearing ethical biologist E.O. Wilson give an Amphitheater lecture on people of faith and science coming together to protect God’s creation on Aug. 22, 2006, Ewalt said he saw a classified ad seeking an editor for The Chautauquan Daily. Although his wife was already working as a dental hygienist in Jamestown, it took some nudging from her family before he applied, as Warren was Trish Ewalt’s hometown.

“For seven years as editor, I experienced Chautauqua through the Daily, and through the work of our reporters and photographers,” Ewalt said.

The staff included those with considerable writing and journalism backgrounds, as well as students new to Chautauqua. Every year, a new group of interns learned how to put together a newspaper that reinvents itself seasonally and has a loyal and attentive readership.

For the rest of the year, Ewalt served as the Institution’s publications editor. As such, he was the primary editor for The Chautauquan (which at the time was printed three times a year), and for most printed and online Institution communications. He was also involved in public relations development and implementation. In 2012, he was promoted to director of communications.

Two years later, Ewalt became associate director of education and youth services under Sherra Babcock, former vice president and Emily and Richard Smucker Chair for Education. In this capacity he supervised the Special Studies and youth programs. He also assisted Babcock with the 10:45 a.m. lecture series in the Amphitheater, the literary arts program and additional educational events.

At the end of the 2017 season, Ewalt became Hill’s chief of staff. As such, he is responsible for the Amphitheater lecture platform, now planned through the President’s Office; external partnerships; and broad, collaborative, multiyear theme development — “not just bringing it into the President’s Office (from the Department of Education), but bringing it across departments.”

“Sherra Babcock was an incredible mentor, not only to me, but to many who serve this Institution,” Ewalt said.“That work as it relates to the lecture platform, those are big shoes to fill. … (It) evolves through conversations that leadership are having, that staff are having, that the community is having about the future of this Institution and its role in the world.”