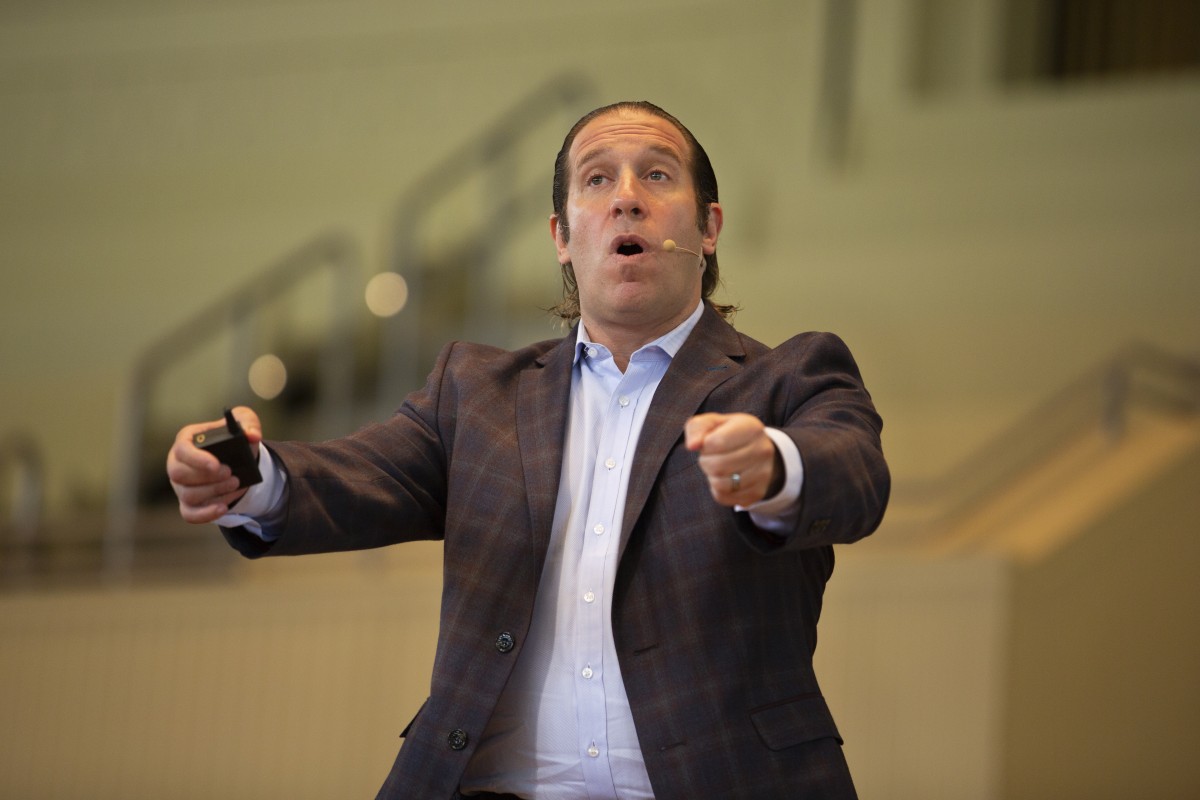 As founding director of Stanford University’s Virtual Human Interaction Lab, Bailenson studies the psychology of VR and how it changes perception; the VHIL builds and studies virtual systems and social interaction. Bailenson authored Experience on Demand: What Virtual Reality Is, How It Works, and What It Can Do, appropriately the title of Thursday’s 10:45 a.m. morning lecture on Aug. 2 in the Amphitheater as part of Week Six’s theme, “The Changing Nature of Work.”

“When VR is used correctly, in my opinion, it leverages the paradox,” he said. “The paradox is this: the brain treats VR as if it were real, … but you can do anything. You can turn physics off, you can change the concept of gravity, … you can grow a third arm, you can change your identity — anything you can imagine in your head right now, you can produce an experience that the brain treats as if it were real. Think about that. Anybody’s fantasy becomes a perceptual reality.”

Despite VR’s unlimited possibilities, the thesis of Bailenson’s lecture was that it is not a substitute for everything. He began with the downsides: distraction, addiction, simulator sickness, media modeling, and its effect on children.

Like any medium, virtual reality simulates the “best experience you’ve ever had,” thus making it addictive. However, when people spend extraneous amounts of time in VR, there are physical effects, like dizziness or numbness. Mentally, when exposed to violence in video games or through VR, people are more likely to exhibit aggressive behavior.

In 2003, Stanford and Bailenson’s lab conducted a study using the contact hypothesis, which theorizes that groups are harmonious when they interact with each other, and body transfer hypothesis, which concludes that when an avatar moves synchronously with the human it is emulating, the brain projects its concept of self onto the avatar.

The study involved a subject becoming a different version of themselves. In the example Bailenson showed to the audience, a white male became an African-American woman in VR. From there, the avatar was treated poorly based on race and gender — the goal of the study was to see if experiencing discrimination in VR changed behaviors and biases in the physical world.

Similarly, another study tested this theory by simulating blindness; half of the participants did so through VR, the other half through role-play. Months after the study, the researchers contacted the participants with an opportunity to volunteer to help others.

“People that became impaired (via VR) helped for twice as long as those that role-played,” Bailenson said. “In general, across 15 years of research, whether we’re looking at issues of race, gender, ageism, issues of people who are disabled, more often than not our findings show a VR experience changes your subsequent behavior.”

Outside of academia, body-transformative VR has been implemented in various industries. Retirement companies use VR aging to convince 20-year-olds to save money for their 70-year-old selves, he said; companies use simulations to practice job interviews and see mistakes or implicit biases in employers; and doctors use VR to practice giving bad news to patients and families — tasks impossible to re-do in the real world.

Bailenson said VR is also useful in counterproductive scenarios. Natural disasters are costly and devastating, but in a simulation, there are no clean-up costs, and they’re virtually innocuous. These disasters are enough to turn even hardened climate change deniers into believers, Bailenson said, but why wait for real-world cataclysmic events when VR can simulate the experience?

The “Stanford Ocean Acidification Experience” attempts to do that by providing users with a realistic experience of diving into the ocean to “viscerally learn what’s happening to our oceans due to human-produced carbon dioxide,” he said. The project has since been incorporated into schools, at festivals and presented to congresspeople, including those, Bailenson said, across the aisle who deny the existence of climate change.

Concurrently, VR can be used to augment activities or research that would otherwise be expensive and rare. Bailenson used his work with the Stanford football team as an example; Stanford’s kicker, Derek Belch, suggested using VR to train student athletes.

The researchers filmed complicated plays and formations and translated them into VR, which the quarterbacks then practiced — not practicing throws, but making decisions.

Bailenson said “that season, Stanford outperformed expectations and our coach, David Shaw, and our quarterback, Kevin Hogan, both attribute virtual reality as one of the many reasons they did so well.”

Off the field, major corporations like Walmart have incorporated Bailenson’s VR technology into their employee training academies to help better equip workers with skills to address every- thing from common problems to Black Friday mania.

“Ten years from now, I want to laugh at … that we all got in our own big metal box and drove the same way for an hour with another person in the same metal box, that we lost an hour of productivity, we burned fossil fuels, people dying in car accidents, road rage — I want to laugh at the commute,” he said.

Work that can be done at home, whether it’s a budget meeting or an interview, should be done at home to reduce humans’ carbon footprint caused by driving to and from work, Bailenson argued; VR makes social presence in the workplace possible.

“VR … allows for things like eye contact and sideways glances and posture changes in a way that video conferences don’t,” Bailenson said. “One of my jobs for the last 20 years has been building VR systems and testing them to instantiate … ‘interactional synchrony’ — it’s a fancy word for psychologists (that means) when conversation flows, there’s a dance to it. Non- verbally, verbally we are in tune, and it’s hard to do that with other mediums, but VR can help us get there.”

To conclude his lecture, Bailenson offered parameters for what to do and what not to do virtually; he suggested that activities taboo or uncomfortable in the real world are not appropriate for VR.

“All of us have to decide what we are comfortable with doing inside virtual reality,” he said. “If there’s behavior that if you did in the physical world, that night you couldn’t hug your spouse, you couldn’t look yourself in the mirror, you couldn’t look at your kids the same way, … my advice to you is I would think twice about doing it in VR.”

Institution Chief of Staff Matt Ewalt then opened the Q-and-A. He asked if civil discourse, which is largely absent online, could be supplemented through VR.

“To be clear, I’m not going as far to say that VR can solve this lack of civil discourse,” Bailenson said. “… I will say … one of the problems with social media, in my opinion, right now is that it’s very abstract. You’re typing very short bursts of sentences, and what you’ve lost is your ability to look a person in the eye, say something and receive verbal feedback. … What I think VR will help with … is when you say something, it’s not just a tweet you’re sending out. You’re actually looking someone in the eye.”

Ewalt then turned to the audience for questions; Bailenson addressed how VR is used to manage trauma, post-traumatic stress disorder, implicit bias and how it is being used by law enforcement. To close the lecture, Ewalt asked how VR is evolving and how it will affect the workplace, tying into the week’s theme.

Bailenson said the next frontier for VR is augmented reality, which is where the real world is enhanced through technology — like, for example, if Bailenson could see an Amp audience member’s name floating above them. AR will change society, he said, as people will be unaware if a partner or person is engaged at work or in social settings, or if they are checking their emails or watching a movie because the technology will be undetectable.